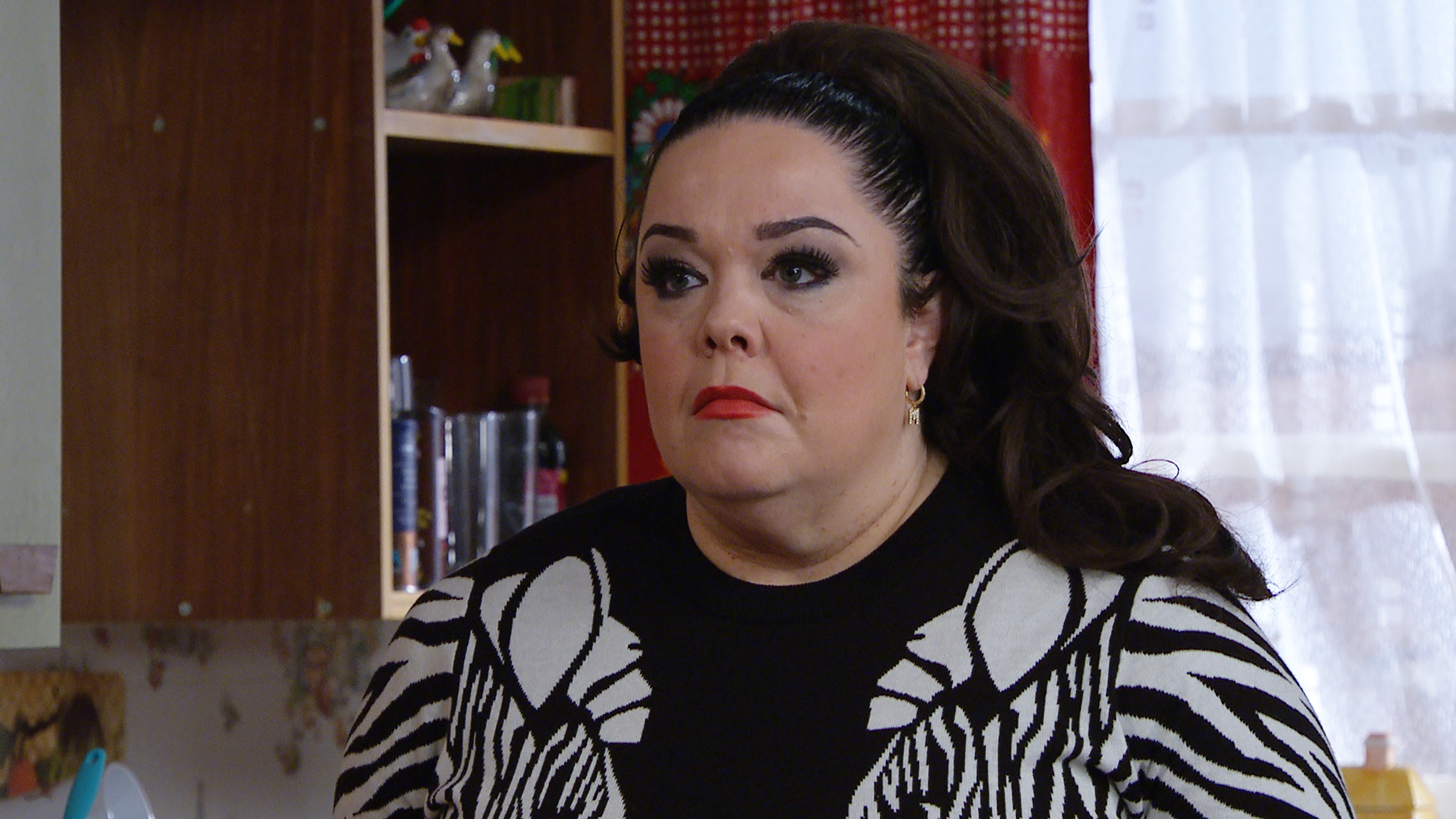 Mandy Dingle (Lisa Riley) is about to have her heart broken in upcoming episodes of Emmerdale, when she discovers that her son Vinny (Bradley Johnson) has secretly married Liv Flaherty (Isobel Steele) without telling her.

Vinny does try to tell her he’s married, but Mandy jumps the gun and assumes he’s telling her that the pair are engaged. She starts planning an engagement party, but then discovers the truth.

Lisa Riley told Metro.co.uk and other press how Mandy finds out that Vinny is secretly married. ‘It’s Noah (Jack Downham),’ she reveals. ‘He’s a complete and utter sneaky rat and he knows exactly what he’s doing.’ She says that Noah has a history of being nasty to Liv about her sexuality, so he has no qualms about landing her and Vinny in trouble with Mandy.

‘The post van comes and a letter’s dropped. Nothing’s said about it and then Mandy goes to work. Noah finds this letter and brings it to the salon.’

The letter is addressed to ‘Mr and Mrs V. Dingle, and Noah encourages Mandy to open it. ’It’s Liv and Vinny’s wedding certificate,’ says Lisa. ‘And then it just goes completely spiral. Mandy is broken to the core. There’s deception of what we’ve gone through the past year, the lies, the addiction. This is deception from Vinny and she really can’t forgive him. And we have these amazing scenes, we had a full day in the salon, and it’s heartbreaking. It’s Mandy and Vinny at their best when they play the ultimate comedy and then they’ll tear you apart because as a Dingle she’s been lied to, she’s been cheated on, she’s been a doormat to everyone and the one person she never for one second believed could deceive her would be Vinny and he’s done the worst. It’s truly, truly heartbreaking.’

Lisa says that, as the scenes in the salon play out, Mandy comes to a terrible assumption about why Vinny kept the secret from her – it’s because she isn’t his birth mother. ‘Bradley plays it just beautifully and he says “Mum, I thought you’d want to organise your dress and your fascinator” and she snaps “Is that all you see me as? Just someone who’s bothered about frocks and fascinators?” And as soon as he mentions that, a lightbulb goes on in her head and then we play the more heartbreak because then obviously she’s not blood. And she feels the only God-given reason that Vinny would be so deceiving to her and cause her so much pain with this lie is because she’s not his blood mother.’

Bradley Johnson also found playing these scenes very emotional. ‘These scenes we shot in the salon were just beautiful and Lisa is amazing,’ he says. ‘It really shows a different side to them as mother and son and even though they aren’t blood, the last thing Vinny wants is for Mandy to feel that she’s not his real mum because she is all Vinny’s ever known. So Vinny wants to put it right.’

Can he find a way to win her round?