David Gordon Green wraps up his reboot trilogy for a horror franchise that never stays dead for long. 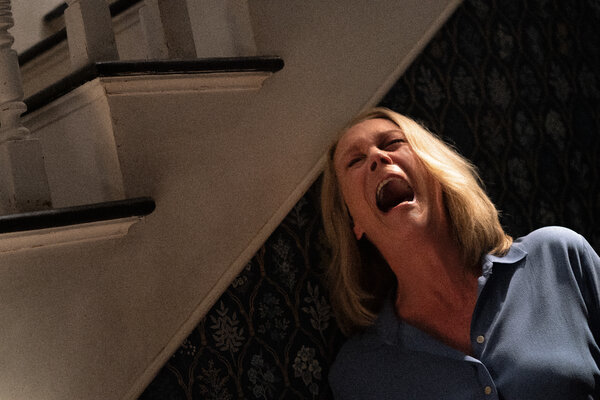 Can we imagine future Halloweens without a new “Halloween”? We might have to, if David Gordon Green’s “Halloween Ends,” the wrap-up film of the reboot trilogy he began in 2018, plants a full stop on a 44-year-old franchise. Savvy viewers, though, will intuit the title’s missing question mark, understanding that Michael Myers, one of cinema’s fustiest boogeymen, is unlikely to remain interred for long.

And for a spell in “Halloween Ends” it seems as if Green might be offering a creative hand to his possible successors, only to withdraw it in favor of business as usual. Four years have passed since the events of “Halloween Kills,” and Laurie Strode (Jamie Lee Curtis) has given up the gunslinging-granny look and doomsday prepping in favor of a cottage-core aesthetic and memoir writing. She and her granddaughter, Allyson (Andi Matichak), have inexplicably remained in Haddonfield, Ill., where the townsfolk still blame Laurie for inciting Myers’s last stabbing spree and, presumably, for their plummeting property values.

Also shunned by the locals is Corey Cunningham (Rohan Campbell), a geeky lad whose disastrous babysitting exploits three years earlier resulted in a dead child, a murder trial and an acquittal. Clearly, he’s perfect boyfriend material, and after saving him from the town bullies, Laurie introduces him to Allyson. Things go swimmingly until Corey encounters Myers one night in a dank cave beneath an underpass and learns there might be more to life than enduring insults and suffocating shame.

At first, Corey’s involvement with the visibly declining Myers (again played by James Jude Courtney) is strangely ill-defined, a cross between caretaker and understudy. But as proximity to evil causes Corey to change — being an acolyte apparently does wonders for the libido — his too-rapid transformation constitutes a missed opportunity for the franchise. By pumping up Corey’s psychological damage, Green could have made a passing-the-torch movie, giving Corey a clear framework for his capitulation to the allure of slaughter. This also would have meshed perfectly with Laurie’s declaration that evil doesn’t die, it just changes shape.

Changing shape, though, is something that exhausted movie properties struggle to do, and Green and his three co-writers soon revert to the comforting beats of the body count. This time, the townspeople — after virtually hijacking the previous installment — have dwindled to a few familiar faces, and there’s a touching reunion between Laurie and a flirty Officer Frank Hawkins (nice to see you, Will Patton, however briefly). He doesn’t know she’s already taken.

The twisted bond between hunter and hunted that’s common to many serial-killer narratives (though rarely more overtly and eloquently than in Bryan Fuller’s terrific TV show “Hannibal”) has always been this franchise’s backbone. As if attempting to honor that, Green has made a movie that’s less frantic and more intimate than its predecessor, one that unfolds with a mourning finality. For me, its most evocative image is of a severed tongue circling lazily on a record turntable — maybe Green’s way of letting us know that he, at least, has nothing more to say.