Despite Tenet now playing in theaters around the world, Christopher Nolan hopes to hold certain cinematic secrets close to his chest. He’s pleased moviegoers are beginning to unspool the mysteries of inversion — and finally figuring out what the hell this movie is about — but the writer-director is staying mum on exactly how he pulled it all off.

His star, John David Washington, is a bit less precious about pulling back the curtain of how the Nolan sausage is made. When Nolan and Washington sat down with ET, the latter said it wasn’t the action training or keeping the mind-bending plot straight that proved to be Tenet‘s biggest challenge but overcoming a lifelong fear to film one particular stunt sequence.

“I would say those are photo-finish seconds to my fear of heights and having to jump off of a building in Mumbai,” he said. “That was probably the chief of them. But it was a breakthrough, because I am not as terrified. I’m now just scared of heights but not terrified. So, that’s good! We’re going in the right direction.”

“He hid it very well. He’s a very fine actor, so I just thought he wasn’t quite taking direction that evening,” Nolan added with a laugh. “Later it emerged that he had a little nervousness going on with the heights. But I wasn’t very aware of that when we were filming.”

Yet, Washington says his director was especially patient with him that evening, since the jump required more takes than usual. “Based off of performance, not technical stuff,” he disclaimed. “I wasn’t taking a note very well, because I was scared. It seemed like I’d receive it, I’d tell him, like, ‘yeah, I got it,’ but I would do the same thing I did before. We got it eventually though!” 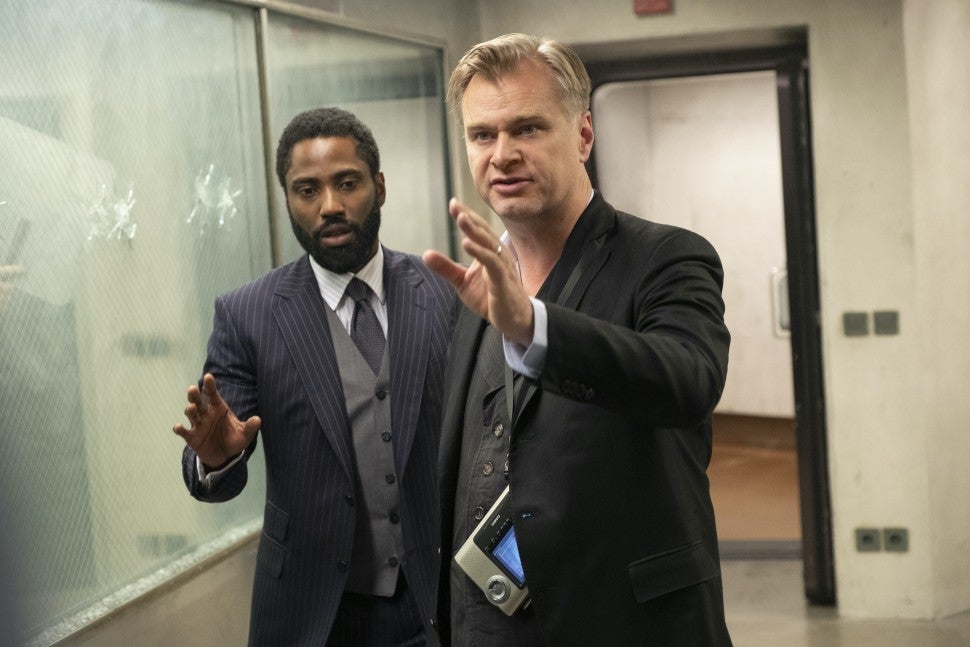 Seeing Tenet requires a bit of stunt work in itself, as the movie is playing only in the theaters that have reopened amid the ongoing pandemic. It opened abroad to a sizable box office and got the seal of approval from Tom Cruise, who saw Tenet in London and documented the experience on Instagram. “That was thrilling for us,” Nolan said, “that a legend like Tom — a legend in action films in particular — would do that.”

Stateside, it’s a bit more complicated. Tenet marks the biggest theatrical release since cinemas began reopening their doors in recent weeks for masked, socially distanced screenings. Still, Los Angeles and New York — among other parts of the country — will remain Tenet-less for the foreseeable future.

“Any time people are really keen to see something you’ve done, that’s obviously thrilling as a filmmaker,” Nolan said, before cautioning: “Obviously, we’re hopeful that people will be patient with the rollout of the film and wait for it to come to their area.”

“The studio, I think, is doing a remarkable job of slowly and safely rolling out the film across the world as theaters are able to open. Hopefully people can be patient with the release of the film,” he continued. “Theaters have committed to the studio to play it for a long period of time, and so we’ll be there for a while for people to discover in their own time.”

Related: Denzel Washington Through The Years

Denzel Washington talks to Ethan Hawke in a scene from the film ‘Training Day’, 2001. (Photo by Warner Brothers/Getty Images)

Denzel Washington accepts the award for ‘Dramatic Film Actor of the Year’ on the 2002 GQ Men of the Year Awards at Hammerstein Ballroom in New York City, October 16, 2002. Photo by Frank Micelotta/ImageDirect.

UNITED STATES – JULY 19:Denzel Washington and Kimberly Elise arrive at Clearview’s Beekman theater for the world premiere of the movie ‘The Manchurian Candidate.’ They star in the film.(Photo by Richard Corkery/NY Daily News Archive via Getty Images)

Director Denzel Washington and producer Oprah Winfrey at the premiere of The Great Debaters at the Arclight Theater on December 11, 2007 in Hollywood, California. (Photo by Jeff Kravitz/FilmMagic)

WASHINGTON – JANUARY 18:U.S. President-elect Barack Obama hug actor Denzel Washington in front of the Lincoln Memorialduring the ‘We Are One: The Obama Inaugural Celebration At The Lincoln Memorial’ on January 18, 2009 at the National Mall in Washington, DC. The event includes a diverse array of talent featuring both musical performances and historical readings and an appearance by U.S. President-elect Barack Obama.(Photo by Chip Somodevilla/Getty Images)

US actor Denzel Washington waves to Japanese fans during an event for his new movie ‘The Taking of Pelham 123’ at a subway station in Tokyo on August 20, 2009.The new film will be shown all over Japan from September 4.AFP PHOTO/Toru YAMANAKA (Photo credit should read TORU YAMANAKA/AFP/Getty Images)

LOS ANGELES, CA – JANUARY 10:Actors George Lopez and Denzel Washington (R) attend the NBA game between the Los Angeles Lakers and the Milwaukee Bucks on January 10, 2010 at Staples Center in Los Angeles, California.NOTE TO USER: User expressly acknowledges and agrees that, by downloading and/or using this Photograph, user is consenting to the terms and conditions of the Getty Images License Agreement. Mandatory Copyright Notice: Copyright 2010 NBAE (Photo by Andrew D. Bernstein/NBAE via Getty Images)

NEW YORK – APRIL 26:Actors Denzel Washington and Viola Davis pose for photos at the Broadway Opening Night After Party for ‘Fences’ at the Bryant Park Hotel on April 26, 2010 in New York City.(Photo by Jemal Countess/Getty Images)

PHILADELPHIA, PA – MAY 16:Denzel Washington speaks during the 2011 University Of Pennsylvania Commencement on May 16, 2011 in Philadelphia, Pennsylvania.(Photo by Gilbert Carrasquillo/Getty Images)

NEW ORLEANS, LA – MAY 09:Actor Denzel Washington delivers the commencement address at Dillard University on May 9, 2015 in New Orleans, Louisiana.(Photo by Josh Brasted/Getty Images)Up Next