Richard Corrigan joined James Martin’s Saturday Morning earlier today as the Irish chef prepared a hearty pancetta soup for the ITV chef. However, James was left bemused and horrified when Richard struggled to keep a fire in a pan under control before burning one of the chef’s tea towels.

As the pair began to discuss the recipe, Richard pulled out a pan from James’ wood-burning stove.

To avoid ruining James chopping board, the chef placed the pan on two wooden logs before pouring oil into the pan.

However, the pan’s temperature was so hot the oil caused it to catch alight as James looked on.

Richard desperately tried to get the fire under control while James warned: “Don’t try this at home.”

Read more: James Martin speaks out on lockdown move which left ‘everyone moaning’ 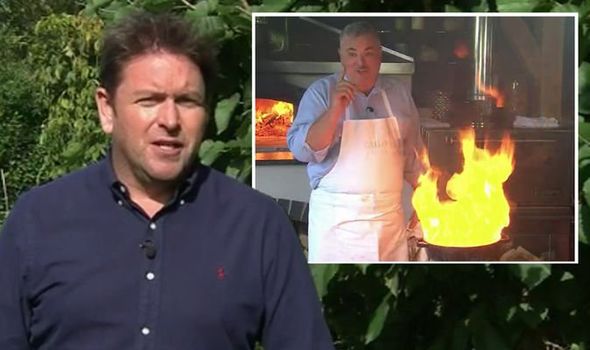 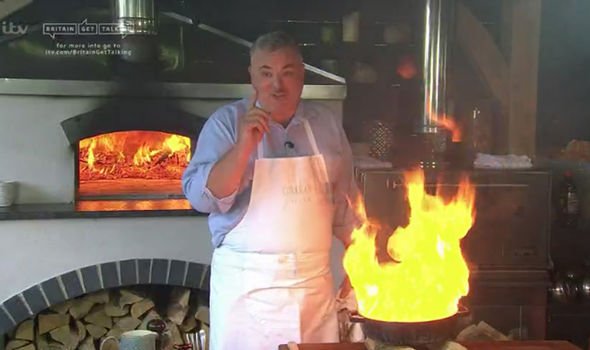 “Never panic,” Richard quipped as he placed a lid on the pan and waited for the fire to burn out.

Once the flames had gone out, the Irish chef used one of James’ tea towels to wipe the pan down.

While Richard continued with the recipe, James couldn’t help but notice the colour of his tea towel had changed.

“Look what you’ve done to my tea towel!” James exclaimed.

Richard went on to finish the dish and James praised the chef as he tucked into the soup. 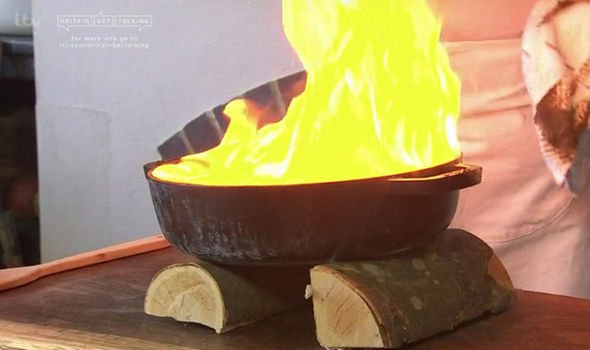 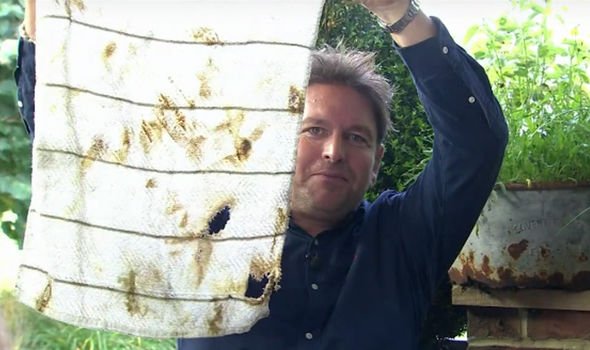 “Before you go can I have my tea towel,” James asked. “I’ve been Corrigan-ed.”

Elsewhere, James was stunned when actor Ben Miller issued a light-hearted warning about some of the ingredients featured in the Singapore Prawns and Squid recipe James was rustling up.

As James introduced his spicy and sweet BBQ fish dish, he pointed out Ben rarely has the opportunity to enjoy seafood.

Cutting James off to explain, Ben said: “Jess, my wife is really allergic.”

“It’s epic pens and everything else, emergency numbers,” he continued.

“So you’ll have to be dipped before you go home,” James quipped.

“I can’t go back home after this,” the actor joked.

One quipped: “Delicious ..Crispy prawn and squid dish. What’s the ingredients for sauce? Ben was talking too much…”

“Can’t wait – I just never know what I’m going to have for dinner till I watch the show. Thanks, James,” a third shared.

While a fourth wrote: “Always look forward to your show on Saturday James. You bring inspiration to cooking!!!”

James Martin’s Saturday Kitchen continues Saturday on ITV at 9.30am.