Come on in, it’s (extremely) warm 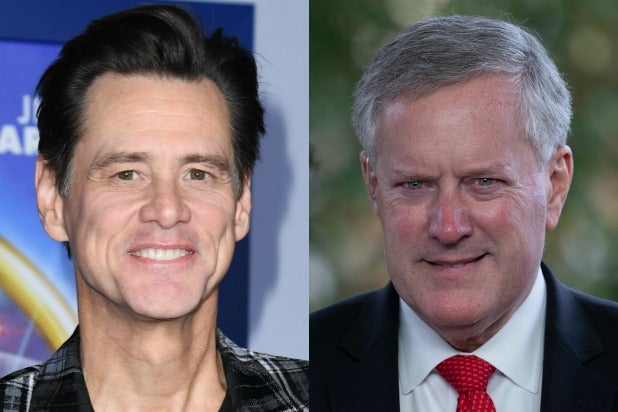 In his new painting, Meadows is depicted in devilish tones of reds and yellows. We’re guessing he’s not too far from the flames.

Carrey has been churning out artwork seemingly in double-time as the Nov. 3 election draws nearer.

In his recent political cartooning, Carrey has tweaked Trump repeatedly for his handling of the coronavirus pandemic. Clearly, the “Sonic the Hedgehog” star doesn’t find Meadows to be innocent in this whole debacle.

Trips to hell have been a regular theme in Carrey’s canvas work: In 2018, he tried out the all-red drawing style on a different depiction of Trump, writing, “Now an innocent seven-year-old girl has died of medical neglect because of Trump’s sadism at the border. If there’s a Hell…”

The more recent cartoons have focused on Republican lawmakers’ response to the ongoing pandemic, as well as the death of Supreme Court Justice Ruth Bader Ginsburg and the decision to move forward on a confirmation hearing for her replacement ahead of the election.

Carrey swore off political cartooning for a few weeks at the beginning of the year. “To me, that was like a time, and it’s been a time, where I just wanted to be the lighthouse that was saying, ‘Hey, stay off the rocks, you’re headed for the rocks,’” Carrey told Yahoo Entertainment in January while doing press for “Sonic.”

He’s since returned to regularly tweeting out his political cartoons — and has also begun impersonating Democratic presidential candidate Joe Biden on the new season of “Saturday Night Live.”

See Carrey’s Meadows art below — we think it really brings out his red eyes.