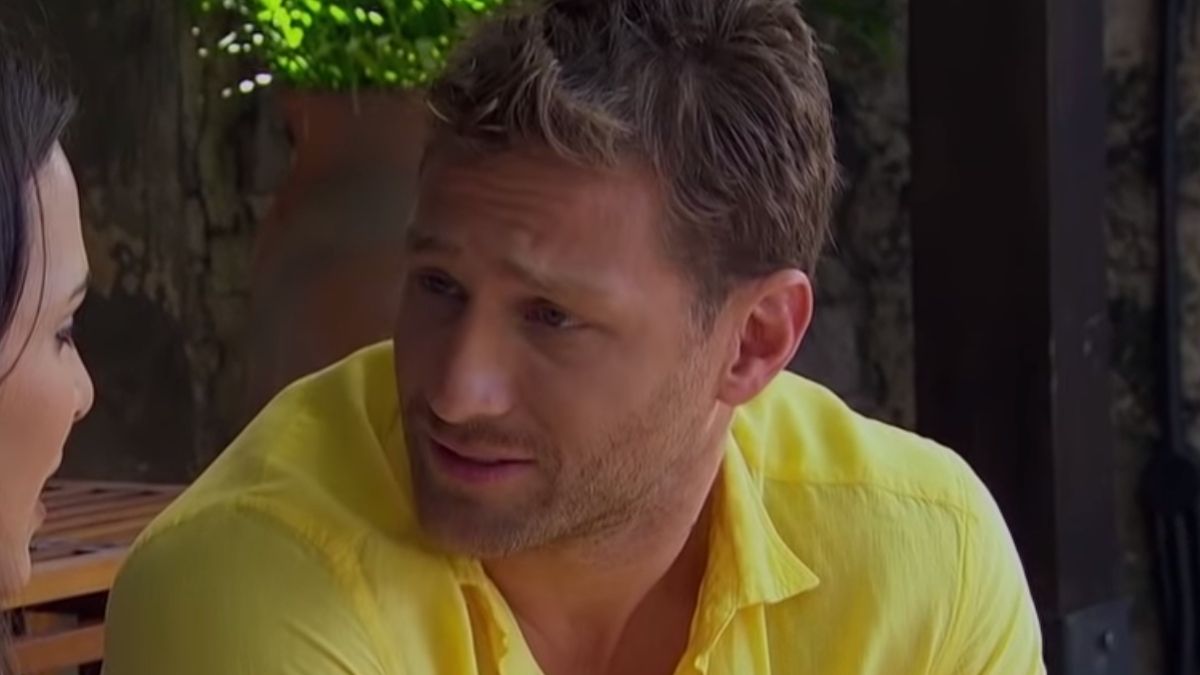 Juan Pablo Galavis has been labeled one of the worst Bachelor leads in the franchise’s history.

He didn’t ask Andi Dorfman any questions about her during their Fantasy Suite date, as he appeared more interested in hooking up with her.

He told Clare Crawley that he didn’t know her, but loved having sex with her.

And when it was time to propose at the finale, he told Nikki Ferrell that he really liked her – a lot.

While the world was expecting a proposal, he walked away with a girlfriend. Now, as ABC reran his episode last night to conclude this summer’s spin-off, The Bachelor: The Greatest Seasons — Ever, Juan Pablo decided to speak out about his experiences.

As it turns out, he’s standing by his decisions on The Bachelor.

Juan Pablo Galavis defends his decisions on The Bachelor

Juan Pablo took to Twitter last night as his season was unfolding. He was reliving his journey and watching, at least during the first hour or so.

“You either PLAY their GAME or are TRUE to yourself…” he tweeted, adding, “Yeap, I decided to be TRUE to myself.”

Just minutes earlier, he had tweeted that some people on the show like honesty and others want you to be fake to please The Bachelor viewers. And Juan Pablo had no problem giving names.

“Thanks, some people LIKE honesty, some people DON’T,” he replied to a fan who called him the most honest person in the franchise.

“In this SHOW @fleissmeister TOLD me to be MYSELF and then he didn’t like my HONESTY… @chrisbharrison DIDN’T like it either, got FRUSTRATED when he TRIED me to say WORDS I didn’t mean.” 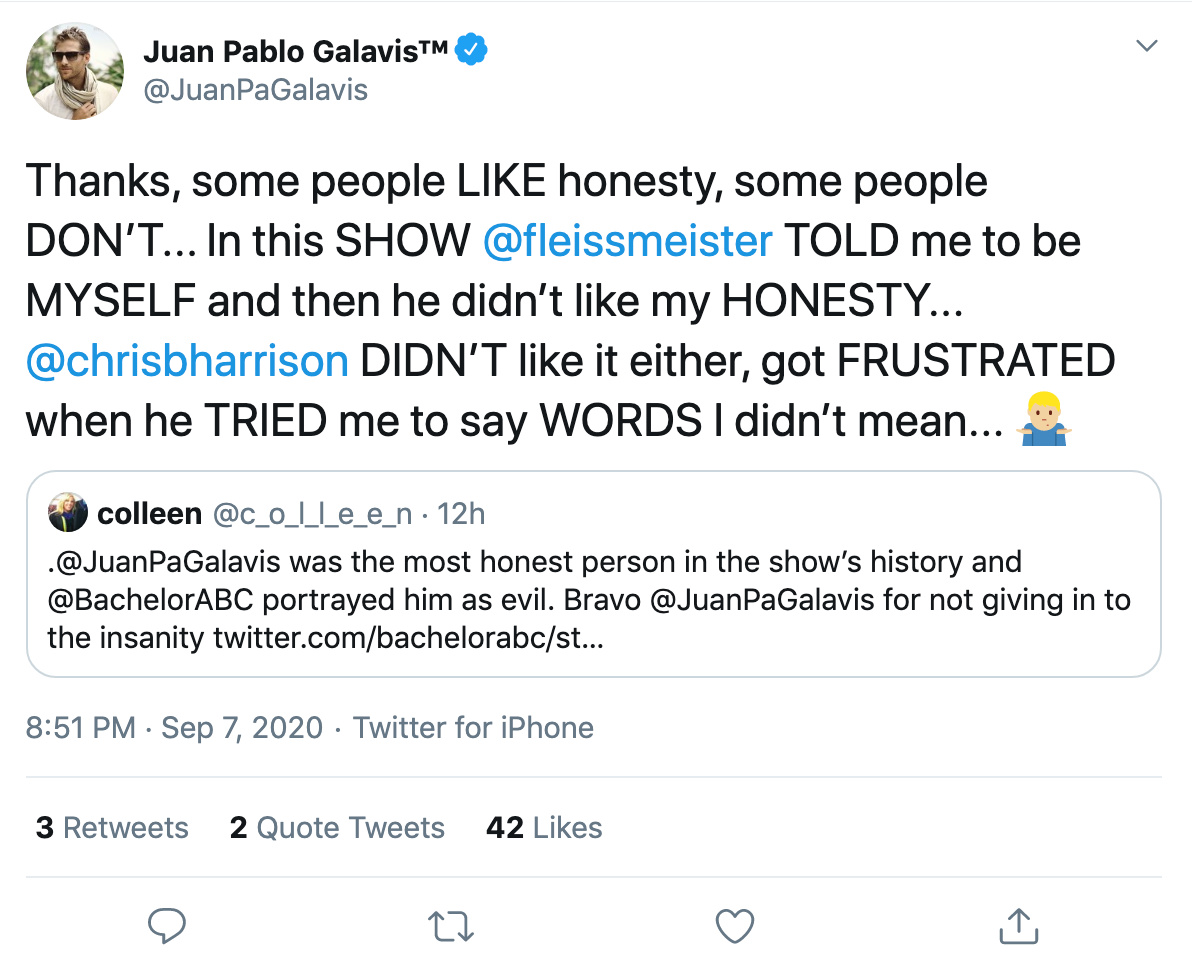 But his tweeting, though limited, wasn’t all negative. He did give a shoutout to Sharleen Joynt, who appeared on his season. She decided to eliminate herself after she didn’t feel a connection with him as they got closer to the proposal.

She couldn’t see them together and dumped him before it was too late. While Chris asked her about her feelings about Juan Pablo, she only had positive things to say.

And he took notice. He thanked her for being herself and honoring his honesty throughout the entire season. 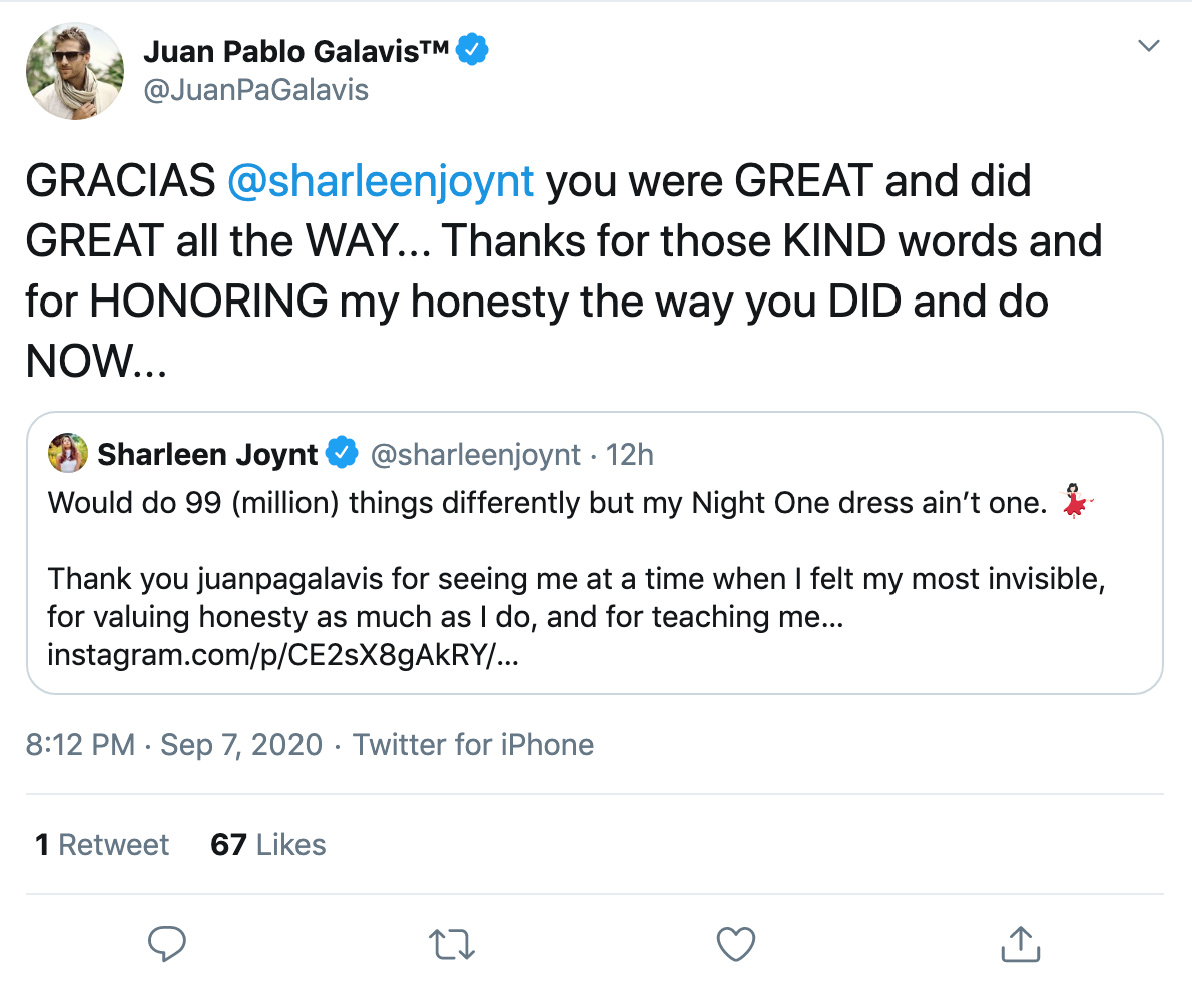 While Juan Pablo tweeted his feelings, Reality Steve also shared something. He revealed that he knew Juan Pablo picked Nikki in the end because he had received a video from someone who had a video of the couple together.

Reality Steve explained that the video was sent to him as Juan Pablo and Nikki were supposed to enjoy their happy time together after deciding to be together. Interestingly, Juan Pablo has said nothing about Nikki for the past couple of weeks.

He has tweeted about Clare, hinting that while she was over him, ABC was not. He was essentially slamming the network for choosing to air his season again.

He also questioned by ABC would set Clare up with younger men when she was first announced as The Bachelorette.

Juan Pablo really wanted to have more children and a wife when he joined The Bachelor. That didn’t happen.

Years after his run on the show, he remained single and didn’t give his daughter a sibling. In fact, he rarely shared anything big in the media. After his bad reputation on the show, he faded into the background and removed himself from the spotlight.

However, he was dating and he even got married. We learned this after now ex-wife revealed that they were no longer together.

Juan Pablo recently got divorced from his wife, Osmariel Villalobos, who shared the news on her Instagram account. He never shared anything about their split. Instead, he continued to post photos of his daughter, Camila.

The Bachelorette premieres on Tuesday, October 13 at 8/7c on ABC.