The wait for the next phase of the Marvel Cinematic Universe has been much longer than anyone expected. But when it does finally launch at the end of the year with WandaVision on Disney+, the MCU will introduce fans to a whole new cast of characters. The Infinity Saga is over, and the days of Iron Man (Robert Downey Jr.), and Captain America (Chris Evans) as leading men are gone. 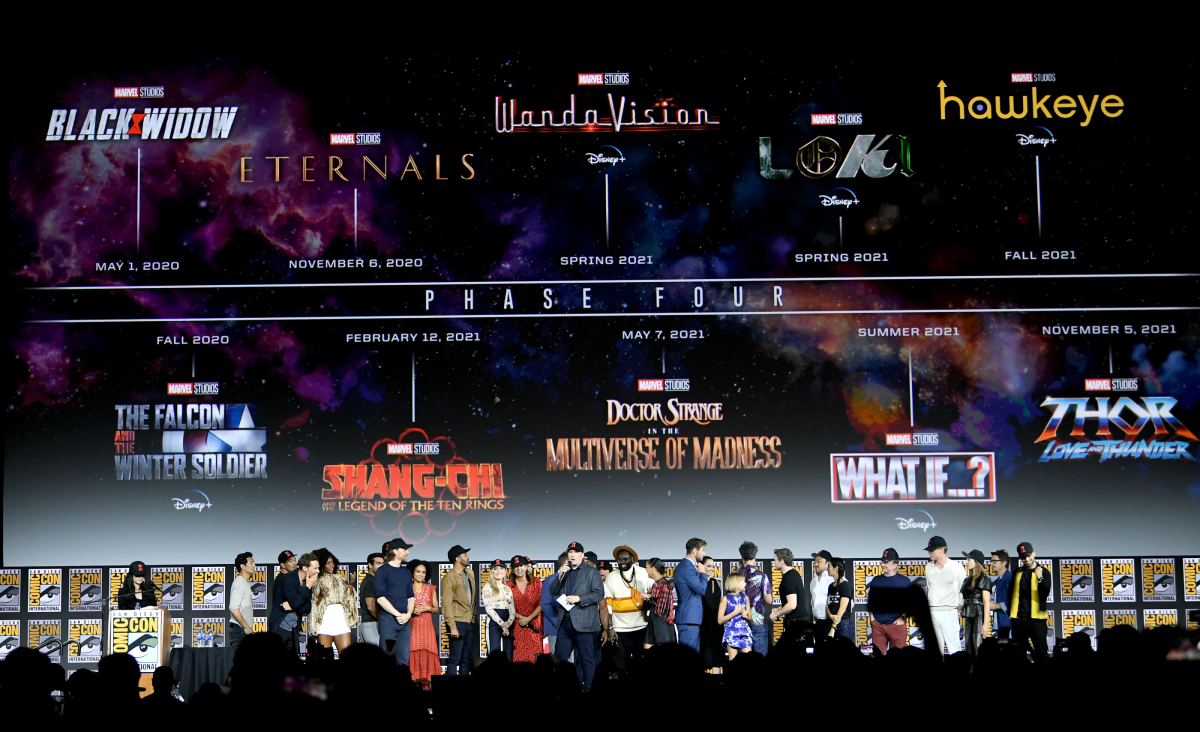 Marvel plans to release at least eight movies and seven Disney+ shows in Phase 4. Here is every new character confirmed to make their MCU debut.

Now that the original six Avengers are no longer assembled, the MCU needs a new team of superheroes. Marvel is hoping that Eternals will be the answer in phase 4, and they feature some big name actors.

Salma Hayek will play Ajax, the leader of the Eternals, and Don Lee will be the strong and skilled fighter Gilgamesh. Barry Keoghan landed the role of Druig, a powerful Eternal who is a villain in the Marvel comics.

Richard Madden will play Ikaris, who has the power of flight and cosmic energy projection. Kumail Nanjiani stars as Kingo, an Eternal who masquerades as a Bollywood star. Angelina Jolie plays Thena, one of the Eternals’ finest warriors.

Lauren Ridloff is the MCU’s first deaf superhero, as she is an Eternal with superspeed. The first openly gay member of the Eternals is Phastos, played by Tyree Henry. Gemma Chan is Sersi, who has telepathic and telekinetic powers. Lia McHugh is Sprite, a trickster Eternal who isn’t able to physically age beyond her child form.

The leader of the Deviants in Eternals is Kro, but Marvel has not yet revealed who they cast in the role. Game of Thrones alum Kit Harington will take on the role of Dane Whitman aka Black Knight. He’s not part of the Eternals, but he and his Ebony Blade are reportedly a major part of the story.

Scarlett Johansson will return for the final time (probably) as Black Widow in her solo film that jumps back in time to the days after Captain America: Civil War. She will be in Russia where she meets up with Alexei Shostakov aka Red Guardian. He is Russia’s answer to Captain America, and Stranger Things star David Harbour plays the role.

O-T Fagbenle plays the character of Mason, and he could possibly be Natasha Romanoff’s love interest in the film. Rachel Weisz will star as Melina Vostokoff aka Iron Maiden. Like Natasha, she is a graduate of the Red Room program.

Florence Pugh could be a major player in coming phases of the MCU as Yelena Belova, a Red Room trainee who is a sister to Natasha. Another confirmed character in Black Widow is Taskmaster. However, Marvel hasn’t revealed who they cast to play the villain who can mirror any fighting style and ability.

A Blade reboot is in the works for phase 4. Mahershala Ali is set to play the daywalker vampire hunter.

The character of Jennifer Walter aka She-Hulk – Bruce Banner’s cousin – will be part of phase 4. However, Marvel has yet to cast anyone in the role.

‘The Falcon and The Winter Soldier’

Wyatt Russell will be part of the upcoming Disney+ series The Falcon and the Winter Soldier. He will take on the role of John Walker aka US Agent., the government’s replacement for Captain America.

Another new character in Marvel phase 4 will be Kamala Khan, aka Ms. Marvel. The Captain Marvel superfan is an Inhuman who has the power to change the size of her body. Marvel has not yet revealed who they’ve cast to play her.

Clint Barton (Jeremy Renner) will be passing on his Hawkeye mantle to Kate Bishop during phase 4. Rumor has it that Marvel has their eye on Hailee Steinfeld, but they have yet to make it official.

Marvel will introduce Lady Loki, the female version of the god of mischief, in Loki during phase 4. Sofia Di Martino will play the role.

Marvel will introduce Marc Spector aka Moon Knight during the next phase. Marvel has yet to cast an actor to play the possibly schizophrenic man who believes the moon god Khonshu has given him powers. But rumors are swirling that Star Wars star Oscar Isaac is the frontrunner.

‘Shang-Chi and the Legend of the Ten Rings’

There’s also a list of actors with unconfirmed roles, including Awkwafina, Kathryn Hahn, Owen Wilson. Phase 4 of the Marvel Cinematic Universe will launch in late November or December with WandaVision on Disney+.