This hyper-stylized quasi-superhero movie by Ana Lily Amirpour follows a mental hospital patient with supernatural abilities; it looks a lot more fun than it actually is. 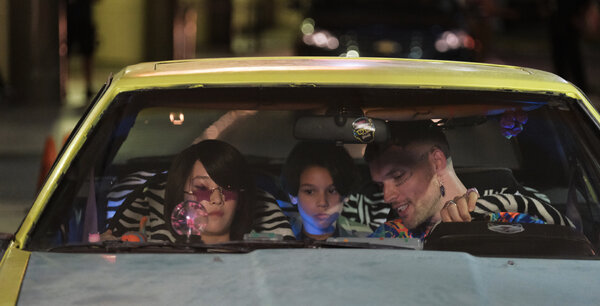 “Mona Lisa and the Blood Moon,” the third feature by the writer-director Ana Lily Amirpour (“A Girl Walks Home Alone at Night”), is a quasi-superhero movie that feels in step with something like “The Suicide Squad” or “Birds of Prey.”

It, too, lays hard on the confetti-colored visuals and slick violence. And its lead, Mona Lisa (Jong-seo Jun), a mental hospital patient with telekinetic abilities, is only a hero insofar as we’re rooting for her to come out on top.

Having broken out of the asylum, her mangled straitjacket mistaken for a fashion statement, Mona Lisa meets the clever stripper-single mother Bonnie (Kate Hudson), whom she saves from an unceremonious beat down. Blank-eyed and completely out of touch with the ways of the world, Mona Lisa is a mostly-silent, Edward Scissorhands-like character who might be mistaken for an innocent were she not also a literal puppet master able to control people’s bodies with her mind.

Bonnie takes advantage of her new pal, directing the directionless Mona Lisa to force strangers into making sizable A.T.M. withdrawals. Naturally, there’s also a determined cop (Craig Robinson) on their tail, with the stakes of the manhunt heightened by an unconvincingly adorable friendship between Mona Lisa and Bonnie’s son, Charlie (Evan Whitten).

The setting, a violet-drenched New Orleans, takes on the sweaty haze of a 3 a.m.-nightclub, but for all its glowing hyper-stylization and giddy needle drops, “Mona Lisa” only ever manages to tread shallow waters. Its comedy lands flat and its moments of emotional catharsis (when, for instance, Mona Lisa scares off Charlie’s egg-tossing bullies, or Charlie clashes with his neglectful mother over her exploitation of Mona Lisa) feel perfunctory. The movie, more often than not, has the look and feel of an edgy music video, which wouldn’t necessarily be a problem if it weren’t also oddly boring.

Mona Lisa and the Blood Moon
Rated R for bloody self-inflicted violence and street assault. Running time: 1 hour 46 minutes. In theaters and available to rent or buy on Apple TV, Google Play and other streaming platforms and pay TV operators.