EXCLUSIVE: CBS is once again dominating the fall TV season with its primetime lineup.

The network has secured 17 of the 25 most-watched entertainment programs of the season so far, including all three of its newest series Fire Country (No. 17), East New York (No. 18) and So Help Me Todd (No. 22).

It should comes as no surprise that the network’s procedurals are among those faring the best. NCIS and FBI are the two most-watched series of the fall season, each averaging about 9.6M viewers per episode, according to the latest Nielsen numbers with NBC’s Chicago Fire in close third with 9.5M viewers.

This is in keeping with last season’s final standings with NCIS, FBI and Chicago Fire as the most-watched scripted shows on broadcast television, according to total viewers.

Since the start of the season, CBS has easily managed to claim the title of most-watched broadcaster. Audiences have watched 45.82B minutes of CBS’ primetime programming from September 19 to October 30, excluding sports and specials — about 13B more minutes than NBC, which comes in at No. 2 in terms of minutes watched among the broadcast networks.

This is actually down from last year, when CBS raked in about 59B minutes viewed across its primetime lineup, but with linear viewing on the decline across the board, the network has still kept up a comparable lead against its competitors.

But people are also flocking to CBS programs on streaming. The primetime lineup has seen its audience on Paramount+ grow 50% compared to last year. The network is responsible for 22 of the 30 most-watched titles on the service.

Here are all the shows in the Top 25: 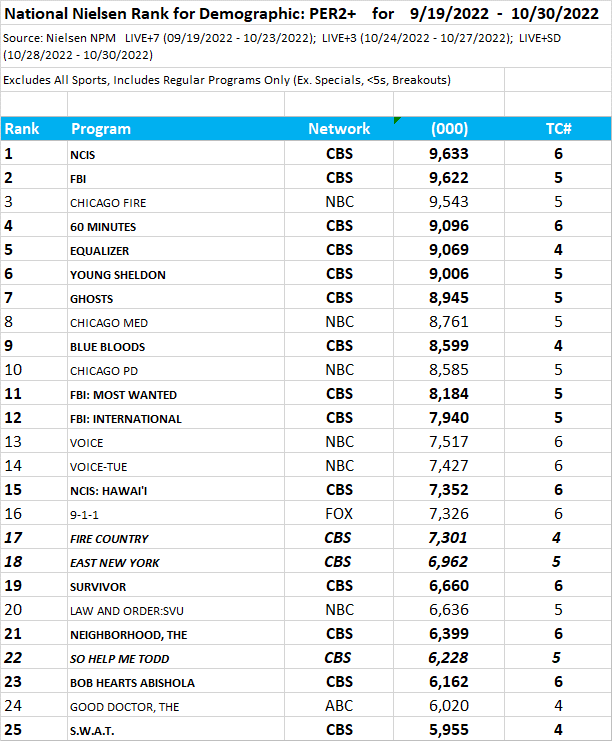