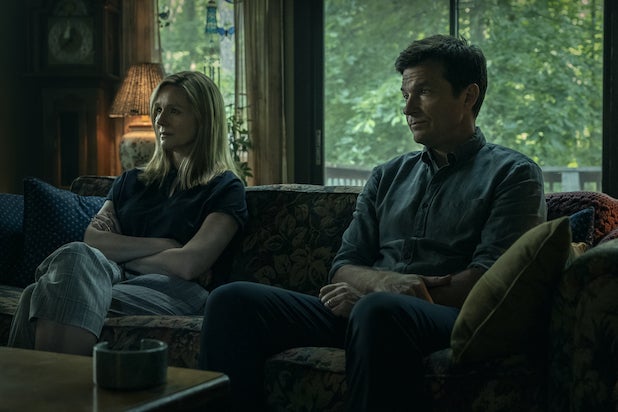 Netflix is adding five castmembers and promoting two others for the fourth and final season of “Ozark.”

Felix Solis, who plays Mexican drug cartel boss Omar Novarro, and Damian Young, who plays the right-hand man of Kansas City businessman (and big-time GOP wheeler-dealer) Charles Wilkes, will be upped to series regulars after being recurring players in the third season.

Alfonso Herrera, Adam Rothenberg, Bruno Bichir, CC Castillo and Katrina Lenk will join the drama, which stars Jason Bateman and Laura Linney as an unassuming couple who get embroiled in money laundering and other illegal operations in an ever-growing criminal enterprise. Herrera and Rothenberg will be series regulars, while Bichir, Castillo and Lenk will recur.

The fourth and final season will consist of two separate seven-episode runs, for a total of 14, and “mark the final chapter in the Byrde family’s journey from suburban Chicago life to their criminal enterprise in the Ozarks.”

Chris Mundy is the “Ozark” showrunner. He executives produces the MRC Television series along with Jason Bateman, Mark Williams, John Shiban, Patrick Markey and Bill Dubuque. Dubuque and Williams are the series’ creators. Laura Linney will be a co-executive producer on Season 4.

Below, here are details on the five new cast members — which offers some clues about what fresh troubles await the Byrde family.

ALFONSO HERRERA joins the cast as “Javi Elizonndro” – Member of the Navarro family who walks a fine line between playing the obedient lieutenant and scheming to take over his uncle’s cartel.

ADAM ROTHENBERG joins the cast as “Mel Sattem” – A cop who fell from grace who now works as a P.I. He enjoys the chase and won’t rest until he unravels the truth.

BRUNO BICHIR joins the cast as “Navarro’s Priest” – Navarro’s confessor and confident; works for the cartel because he deeply believes he belongs where God is needed most.

CC CASTILLO joins the cast as “Sheriff Leigh Guerrero” – Missouri law enforcement who refuses to play on anyone’s terms but her own.

KATRINA LENK joins the cast as “Clare Shaw” – CEO of a leading biopharmaceutical company, whose judgement is corrupted as she learns the true cost of power.