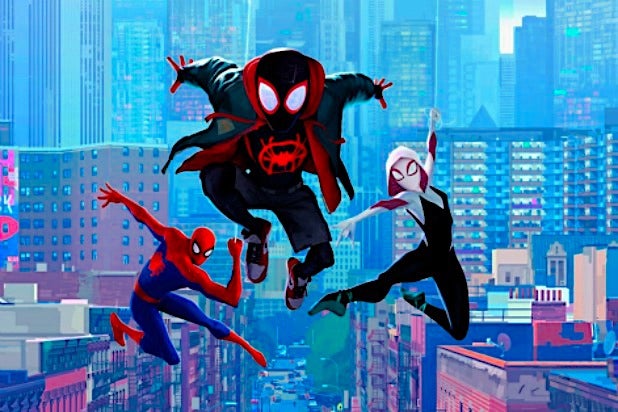 The sequel for “Spider-Man: Into the Spider-Verse” has set a trio of three new directors to direct the animated sequel at Sony Pictures Animation. The new directors are Joaquim Dos Santos, “One Night in Miami” Oscar nominee Kemp Powers, and Justin K. Thompson, an individual with knowledge told TheWrap.

They’ll take over from the trio of Bob Persichetti, Peter Ramsey, Rodney Rothman, whose film won the Oscar for Best Animated Feature in 2018, though Ramsey is also returning to executive produce.

Returning as producers on the new “Spider-Verse” are Phil Lord, Chris Miller, Amy Pascal, Avi Arad, and Christina Steinberg. Alonzo Ruvalcaba will co-produce. Lord and Miller will also be credited as writers on the film, along with David Callaham.

“Spider-Man: Into the Spider-Verse” will open in theaters October 7, 2022.

“The crew behind the ‘Spider-Man: Into the Spider-Verse’ set such a ridiculously high bar, and we’re humbled to take on the challenge of charting the next chapter in the story of Miles Morales. We can’t wait to surprise fans with the wild new adventure we’re sending Miles on with his friends, both old and new,” the trio of directors said in a joint statement.

“We are so lucky to have Joaquim, Justin and Kemp on the ‘Spider-Verse’ team. They are all Super Heroes at what they do and each brings a unique sensibility to the ‘Spider-Verse,’” Lord and Miller said in a statement. “We are huge fans of Joaquim’s work – he makes his characters so heartfelt and unique, and he can tell an emotional story with an action sequence the way a musical does through a song. Justin is a maverick filmmaker who relentlessly pursues visual innovation and surprise but always in support of the emotional storytelling. Kemp’s work is incisive and ambitious and funny – with a writer’s wisdom and a director’s heart – he just knows what matters in every scene.”

They continued: “All three of them elevate every project they take on, and they are certainly raising our game. We honestly just like them and want to be their friends and we’re hoping working on this movie together for the next few years will totally make that happen.”