Spoiler alert! Do not proceed if you have not watched Thursday’s winter finale of Station 19.

The devastating but powerful winter finale of Station 19 left the firehouse reeling and forced to pick up the pieces after two of their own were arrested following a tense, racially-charged confrontation with police.

Titled “Out of Control,” Thursday’s hour — the first of a two-hour crossover finale event with Grey’s Anatomy — brought the off-duty firefighters of 19 to assist in helping a distraught mother reunite with her missing teen girls, who were being trafficked. As the episode unfolded, the situation began to escalate between 19, the cops and the woman, reaching a boiling point when the white officers, unwilling to de-escalate the situation, went to arrest the woman, who was Black.

Understandably frustrated and fed up with the cops’ treatment of the mother and their fellow firefighters, Dean Miller (Okieriete Onaodowan) and Robert Sullivan (Boris Kodjoe) were arrested amid a scary, tension-filled climactic fight with the officers that could have very well ended in someone getting hurt — as the rest of 19 looked on in horror, stunned at they had just witnessed. “It’s definitely quite a cliffhanger and I’m looking forward myself to seeing what happens, but also to gauging people’s reactions because it’s going to be a really impactful moment. I hope everyone is as surprised and shocked and a little scared,” Station 19 star Barrett Doss, who plays Vic Hughes, exclusively tells ET of the gut-punch ending.

As the actress previews, the traumatic events of the winter finale will force 19 to have some very difficult conversations and brings to light a lot of things that they haven’t “touched on.” In a postmortem discussion, Doss opens up about why she initially had mixed emotions about the episode, the ramifications Miller and Sullivan may face as a result of their arrests and how this experience changes the firehouse forever.

ET: When you got the script for this winter finale, what were your initial feelings?

Barrett Doss: I had conflicting feelings about it. Of course, I was excited to get a script. I felt lucky to be working. Basically two things. I was thrilled that we’re beginning a discussion on our show about social justice and police brutality and the issues that Black people are dealing with in our country, women and girls, and of course, violence against men by the hands of the police. It’s a very serious topic and I’m glad we’re tackling it and beginning the conversation on our show about social justice. But of course, it’s also very painful. It was difficult to shoot that scene. It was difficult to read that scene, knowing that this happens to people every day. And that Black people — Black women and girls, and Black men are vulnerable. It’s painful and difficult to have to walk in those shoes, and to consider that reality with regards to firefighters, who, when they’re out of uniform are just people. I think, especially on our show, we know that Dean and Sullivan and our team are heroes. But when we’re out of uniform, we’re just Black people and we have to live in that skin and deal with the consequences of living in that skin. And that can be dangerous. It’s unfortunately a risk that it’s easy for people to forget. So yeah, it was great and also scary.

Over the course of the episode, the situation between the cops, 19 and the mother begin to escalate and it reaches a boiling point in the end. What are you proudest of in terms of the execution of how it played out in the episode?

I’m mostly proud that we’re doing it. I’m proud that we’re showing this reality and how quickly things can escalate. That when guns are drawn, the temperature changes. And wanting to fight for a righteous cause sometimes isn’t enough to protect you. Even running out of a literal burning building and holding a small child, won’t protect you. And that it can be dangerous for Black people to exist in the world. It doesn’t matter who you are. I think that that is something that, even with the events of the last year, that’s been going on far longer than that. But with the social justice revolution that’s happening and the awakening that people are beginning to have, we’re reminding them that it doesn’t matter who you are, that there is a community in this country that is incredibly vulnerable. To be able to remind them of that and to show it and how quickly it can escalate is something I’m really proud of on the show. 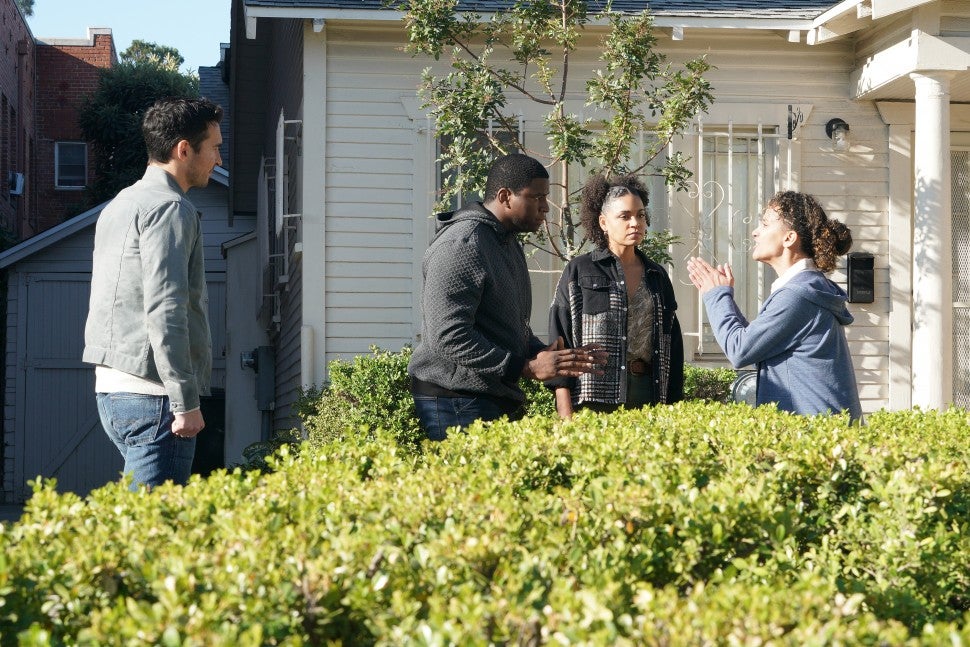 Out of Station 19, Miller and Sullivan are the ones who get arrested, which leaves a lot of unknowns for the future of the firehouse, and if there are ramifications for their arrests. What is the state of 19 at the end of this episode?

I can’t say too much. What I will say is that it forces a call to reexamine our relationships to the job, and in some cases, to each other. It brings in a lot of questions that I don’t think we’ve touched on, on our show. We focus so much on what brings these characters together and what keeps them united as a team, we haven’t talked a lot about what makes them different from each other and those fundamental differences that some of us walk around with. We have queer characters on our show. We have Black characters on our show. We have mixed race characters on our show. These are things that we haven’t touched on with that much specificity and we are getting into those conflicts and how some of our identities might rub up against the reality of doing our jobs and being able to do our jobs well. That’s what I can say about where this goes.

And then there’s the question of whether this affects Miller’s daughter Pru.

It’s interesting. Miller has a complicated relationship with his family, but in addition, his family has money. So what does that leave them? Does it put the baby at risk in terms of his custody? I don’t know yet, but I think these events will bring a new sort of understanding of some of our characters’ family relationships and how we relate not only to our figurative family within the firehouse, but to our actual blood relatives who we may or may not be seeing some of.

Vic and Miller are finally back on the same page, but he still may have unresolved feelings for her. What do you foresee in terms of them moving forward? Will that get addressed?

Certainly this situation that they find themselves in is a great opportunity that could either bring them closer together or push them further apart. How we resolve these unresolved feelings is still, right now, up in the air. But Vic still doesn’t know, doesn’t have any awareness that Miller has feelings for her. And right now her focus will be on making sure he feels supported and feels safe because she, as a Black woman, she understands that there is trauma associated with what he’s been through, in addition to her own trauma from watching that happen. And what happened on the actual call with the mothers and the daughters and her experience as a child, as a little Black girl, and how that impacts her going forward after witnessing her literal worst childhood fear.

There is a new boy who seems to be in Vic’s orbit in firefighter Ruiz. Does that progress in the second half of the season?

I can’t say too much about it, but I will say, Vic has a vested interest in moving slow right now. She rushed into a relationship with Jackson [on Grey’s Anatomy] and that led to some unintended consequences. She’s trying and struggling to change some of her patterns because she’s starting to realize that maybe she has some issues with intimacy and the way she processes relationships and her relationships to other people. I think that it’s wise, and I’m glad she’s taking things a little slow right now. But there may be some unintended consequences with her choices going forward. I’m looking forward to people seeing that.

Station 19 returns March 4 on ABC. For more on the series, watch the video below.

To stay up to date on breaking TV news, sign up for ET’s daily newsletter.