A father and daughter team up to save a town after she sets loose a spirit that brings spooky decorations to life. 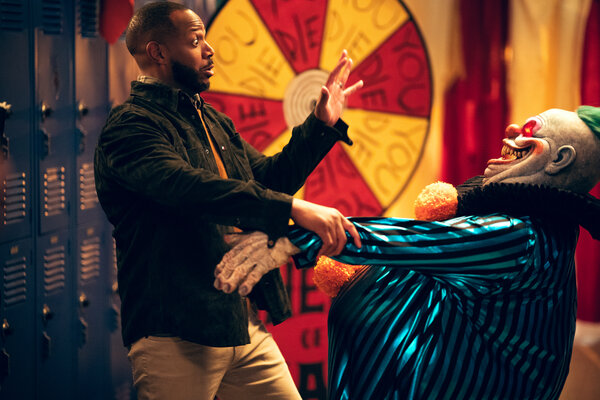 “The Curse of Bridge Hollow,” a lighthearted horror comedy from the director Jeff Wadlow, boasts an appealing premise: The plucky teenager Sydney (Priah Ferguson), futzing around with a Ouija board, unwittingly sets loose a demonic spirit, which brings to nefarious life every Halloween decoration in town. Her father, Howard (Marlon Wayans), is a high school science teacher and hard-nosed skeptic; when the awakened skeletons, zombies and clowns terrorize the town, the rational father and credulous child must team up and meet each other’s views halfway. And in what seems like the perfect conceptual addendum, the town is widely renowned for its Halloween decorating. “Everyone picks a theme, and then you go big time on that theme,” explains a zealous neighbor (Rob Riggle), whose yard is decked out with zombies in tribute to “The Walking Dead.”

This setup promises a gleeful escalation of comic pandemonium, but the film fails to deliver. One early set piece, in which deadly spiders run amok in a nursing home, shows potential but swiftly devolves into a tedious slog of limp action clichés and irreverent quipping. The most flagrant problem is the film’s lack of visual imagination. Wadlow, a good horror director, seems hamstrung by the family-friendly context and struggles to develop tension in the absence of a plausible threat of violence. (For a movie rife with fights and chase scenes, it has a body count of zero.) The creatures are dull and unoriginal across the board, failing to capitalize on the range of styles of decorations, while the evil spirit who is the film’s ultimate villain looks like he’s been outfitted from the discount bin of a Spirit Halloween.