Just like in any other high-level, battle-of-wits competitions, chess has its own tells. And while there may be plenty to suss out in matches between long-time players, there’s one quick way to spot a pretender.

For chess lifer Bruce Pandolfini, that was one of the key ways to help make sure that the performers on screen in the new Netflix series “The Queen’s Gambit” didn’t break the illusion right away.

“Perhaps the most important thing is how they grab and move the pieces. So you really want them to look natural and we worked on that a lot,” Pandolfini said. “It’s like looking at someone handling a baseball bat. If they grab it in the middle, you know they don’t like baseball. There’s a certain flow and fluency to it that you want to try to capture, if you can.”

Pandolfini is no stranger to fictional portrayals of prodigious chess talents, having consulted on a number of other film and TV projects, including “Searching for Bobby Fischer” in which he’s portrayed by Ben Kingsley. He’s also written a flotilla of books about the intricacies of chess strategy, from overall guides to closer investigations of openings and endgames.

Even for a series like “The Queen’s Gambit,” which uses the constant presence of a chessboard as a building block for Beth Harmon’s story, rather than a surface-level affectation, there wasn’t a concerted effort to try to drill the main characters in the finer points of the game. Pandolfini worked with Anya Taylor-Joy and other actors by focusing on patterns that wouldn’t distract from the other physical and mental demands of their respective roles.

“We would use mnemonics and other visual cues to help them pick up on things and remember it more easily,” Pandolfini said. “We tried to do things in sequences, usually of three, so that it connects the moves and would make it seem more natural. If they have to stop and think at every move, it might come off as being a little bit unprofessional, especially at points. So we would have little visual aids on the board and ways of remembering things. Whenever we can, we try to give them that to feel more comfortable.”

One particular challenge that “The Queen’s Gambit” presented was the show’s sequences that involved chess variations beyond the standard, timed, one-on-one matches. There’s a scene of Beth and Benny (Thomas Brodie-Sangster) reciting moves back and forth in a virtual roadtrip game. In practice, that’s closer to memorizing a cumbersome monologue. 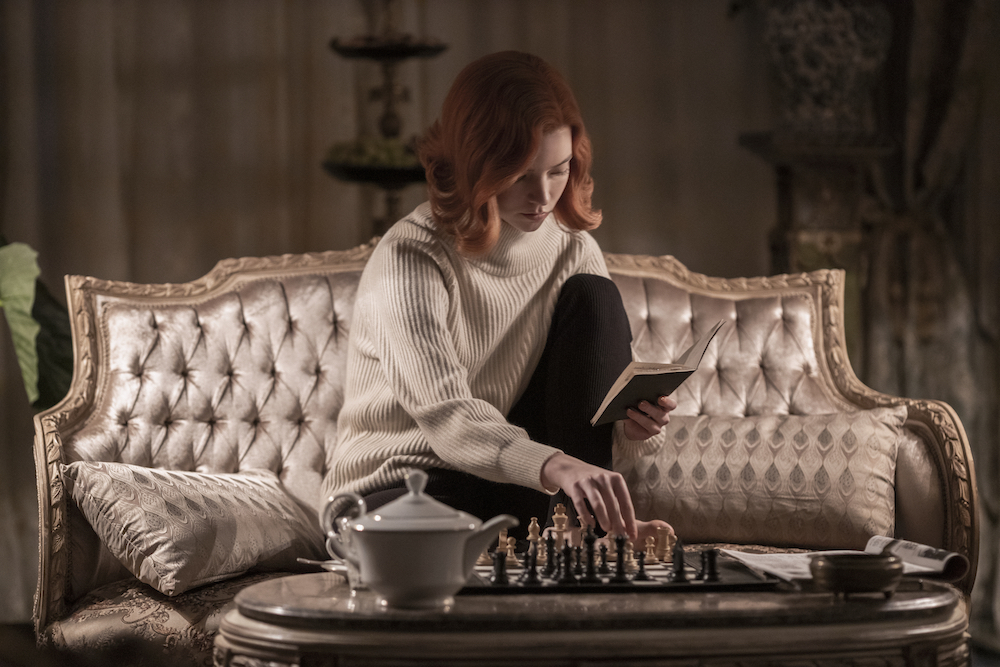 Anya Taylor-Joy in “The Queen’s Gambit”

What’s far more difficult to “fake” are the scenes that take place once the pair arrive at their destination. For the late-night speed chess sessions and Beth’s one-against-everyone simultaneous free-for-alls (“simuls,” for short), the preparation was a little more involved. Director Scott Frank lets enough of these scenes breathe, lingering on the action as it unfolds. So rather than solely cutting to insert shots of someone else’s hands, the actors had to anticipate plenty more moves in advance.

“For some of those more complicated scenes we did prepare at greater length. We sent them little films so they could watch good players playing the same moves. Another thing is we could send them the moves, so they could be on their phone, you can just follow a sequence of moves on your phone, so they could look at it anytime they wanted,” Pandolfini said.

Of course, those moves don’t just appear from the ether. Walter Tevis’ novel “The Queen’s Gambit,” from which the series is adapted, doesn’t feature full start-to-finish, move-by-move rundowns of any of Beth’s matches with her Kentucky counterparts or Soviet grandmaster Vasily Borgov. Pandolfini helped to make sure these boards, whether those that take centerstage or ones seen in the background of any number of wide tournament shots, followed a natural and logical evolution.

“We want to retain the logic of it so that the final position truly does connect to the earlier modes. Originally, I created 92 positions or games that matched the script. We called that the Bible. In the end we had as many as 350 different positions,” Pandolfini said. “Of course, most of those aren’t filmed. Many of them were used off-camera just to create the ambience. So there’s a lot of work that goes into it, that helps everyone feel as if you’re in a true chess setting. 350 games, that’s the most chess ever for any dramatic series or film. I worked on ‘Searching for Bobby Fischer’ and we had about 100.”

Pandolfini met with Tevis in the run-up to the novel’s publication in 1983, while working as a consultant for Random House. He said that he offered Tevis (who was a skilled chess player in his own right) some suggestions based on reading the as-yet-unpublished manuscript, many of which didn’t end up in the final version. In the end, Pandolfini (who Tevis included in the acknowledgments of the book) said that the most major idea that made its way to the novel was his suggestion of the title itself.

For the screen version of the story, Pandolfini wanted to make sure that the drama didn’t come at the expense of the chess logistics, as he saw in some of the novel’s examples.

“There were moves that just didn’t make sense. It would be hard to imagine what the condition is. First of all, it was imaginary, not based on something concrete,” Pandolfini said. “It would say ‘bishop move to King knight 4,’ let’s say. Well, what did that mean? There are countless decisions in chess. Then a page later you have ‘rook to knight 6.’ To connect these moves is not so easy. So I really did have to work very hard on it, and it never got into the novel. But it was much easier to do here.”

Now working on the TV version of this story nearly four decades later, Pandolfini wanted to offer this adaptation with dramatically striking attacks and surprises that didn’t feel at odds with the high-level play and player strategies that are explicitly baked into the script. 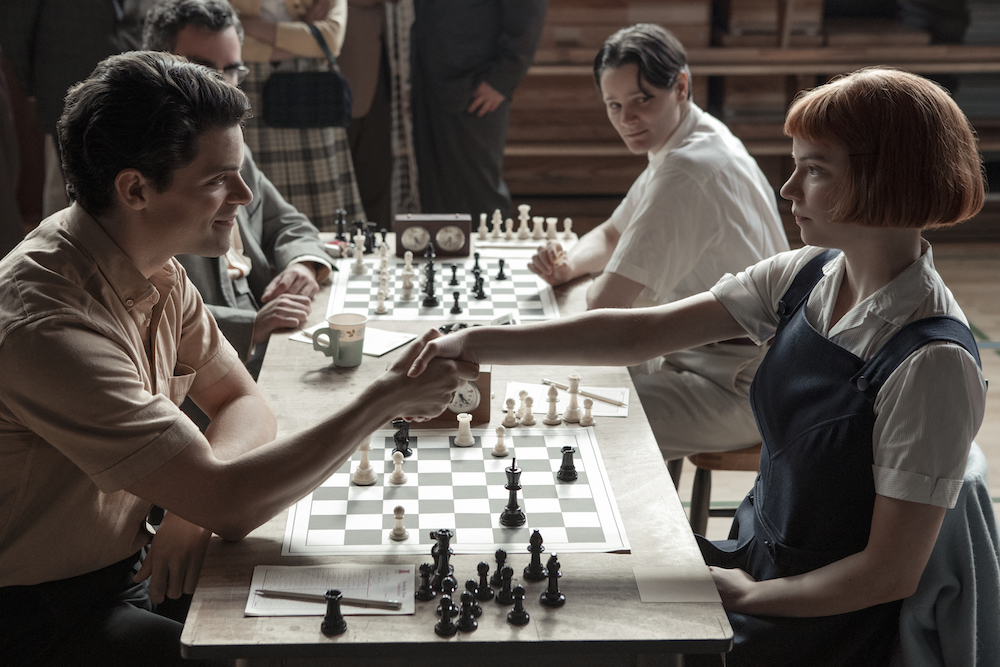 “In some cases, openings are mentioned. The games that are shown have to reflect those openings. I think there’s a Levenfish Variation, there’s a Najdorf Sicilian, there’s a Dragon. I think Ruy Lopez is mentioned. Some of this also has to be translated into Spanish and into Russian. The terms are roughly synonymous, but they’re a little different. So the games had to match the script as much as possible,” Pandolfini said. “But I did have some leeway to go off in more interesting directions, because some of that might be boring visually. So we had to think of what would be more interesting, position-wise.”

In addition to offering granular attention to the chess being played, Pandolfini also was able to offer perspective from his own experiences in competition from before his second act as a commentator and writer and consultant.

“I knew what it was like, in the old days. I was a tournament player myself when I was younger. I remember the American scene, how small-time it would be compared to the European and Spanish-speaking countries’ contests and matches, where everyone in the audience was very knowledgeable. People sitting around, very good players in many cases, but in the American tournament, not necessarily so,” Pandolfini said. “It would be a big thing if you were the state champion of Kentucky. But it wouldn’t be anything compared to what happens on the world scale. Which was like Bobby Fischer was so extraordinary. He came out of nowhere.”

In the end, Pandolfini’s contributions still rely on those who ultimately carry out the games in the run of the show. He saluted Taylor-Joy’s ability to not only handle an understanding of the move-by-move logistics, but how to project herself as someone in control of an opponent.

“They say play the board, not the player, but even the world’s best players take into account subtleties and nuances, bodily expression and movement. Your opponent doesn’t want to give away any information, and you have to not seem too unnatural by not moving at all,” Pandolfini said. “I think Anya is great. She didn’t want to prepare a lot of the moves well ahead of time. She’d do it just before the scene and she’d get it like that. Anya really got into it, she picked up right away with great sensitivity. She looks like a real top-level chess player, but it’s not easy. And I think she really enjoyed doing it. You can feel that in every take.”

And his praise isn’t reserved for only one Beth Harmon.

“I also have to give credit to Isla Johnston, who plays the young Beth,” Pandolfini said. “She’s a real prodigy! She didn’t know how to play chess either. She got it pretty quickly. She looks like a tremendous chess talent. She’s just a brilliant young girl, who I think has a very promising career if she stays with acting.”

“The Queen’s Gambit” is now available to stream on Netflix.