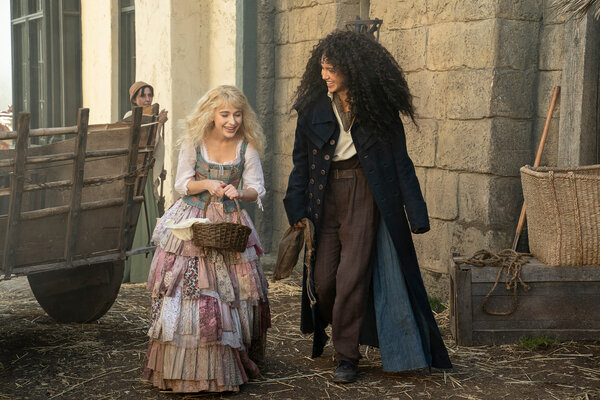 Light versus dark. Hero versus villain. Good versus evil. Sound familiar? It should — it’s perhaps the most basic motif, where nearly all stories begin, from religions to myths, fairy tales to blockbusters.

So what Netflix’s “The School for Good and Evil” attempts — to draw from and pervert cookie-cutter hero and villain stories in a novel way — is a task so monumental that it can’t measure up. The film, adapted from the young adult book series by Soman Chainani and directed by Paul Feig, is a mess of contradictions: a muddle of clichés and inconsistencies with just enough charm and cleverness to keep you watching.

Two best friends, Sophie (Sophia Anne Caruso) and Agatha (Sofia Wylie), are the adolescent outcasts of a quaint Arthurian-style town named Gavaldon: Sophie dreams of a glamorous life as a princess and Agatha seems to channel Sabrina the teenage witch. When Sophie makes a desperate wish to escape her provincial surroundings, she and Agatha are transported to a school for storybook heroes and villains. The problem is that they’re sorted into opposite houses: Despite her fantasies of ball gowns and princes, Sophie is cast in the gloomy halls of the evildoers, and Agatha, with her witchy name and affinity for black clothes, is stuck in the cotton-candy-pink halls of the princesses.

Sophie aims to prove that she’s really meant to be a princess, but in the process is seduced by a greater evil; and Agatha, seeing the maniacal plots afoot, tries to save Sophie and return them home.

However, Wylie’s performance as Agatha is sharp and modern, and performances by other big names (Charlize Theron, Michelle Yeoh, Laurence Fishburne and a less impressive Kerry Washington) give weight to the flimsier moments in the script. And the film has immaculate style, from its ornate hair and makeup to its elaborate costumes, even its fights: The choreography during a sprawling battle sequence deftly weaves the chaotic hodgepodge of visuals into a technically impressive feat.

There’s the sense that underneath its swordplay the film is reaching toward a deeper exploration of questions like, is there such a thing as fate? Do we each have a fundamentally fixed self? How have our terms of right and wrong, good and bad, changed? To that end the film often gets meta in the cheekiest ways, whether it’s Agatha snapping to the voice-over narration (by Cate Blanchett), “You know we hear you narrating, weirdo,” to Sophie dismissing a character with the quip, “The protagonists are speaking.” But the film doesn’t have the space to expand all of its ideas and gracefully unfold its plot, which is full of so many narrative twists and reversals that “The School for Good and Evil” equates to a whole TV season untidily packed into a feature film.

That doesn’t mean I wouldn’t let this story, as flawed as it is, take me back to this Hogwarts-esque school of powerful sorcery and brave feats; if only the film could fully execute at least half of its ambitions, then that would be a story with impressive power.