Tipping Point was back on ITV with a Sunday afternoon special as a repeat episode of Lucky Stars was aired. This time, it was former Coronation Street Catherine Tyldesley, This Morning’s resident doctor Zoe Williams and Strictly Come Dancing judge Bruno Tonioli chance to win some money for their chosen charity. And from the moment Bruno was introduced, he was causing mischief for host Ben Shephard.

The first question was asked and Catherine was the quickest to hit her buzzer, and this infuriated Bruno.

He remarked: “I think you cheated!” But Ben was quick to take control: “She’s just got quicker wrists than you.”

“I don’t know about that!” Bruno cheekily commented leaving Ben speechless at his innuendo.

The game swiftly moved on and Bruno’s luck changed as he managed to beat the other two celebrities to his buzzer. 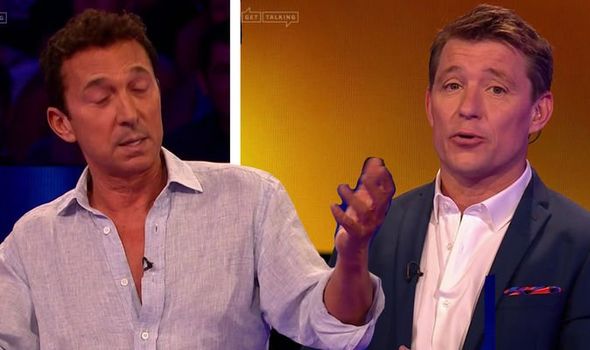 After answering the question correctly, he dropped the counter into the machine and eight counters tipped over.

Ecstatic at £800 being added to his jackpot, Bruno achieved a loud round of applause from the studio audience.

Clearly enjoying the attention, Bruno started unbuttoning his shirt and he stated: “Yes I’m getting into this!”

And Ben added: “I’m not sure we’re going to be on late enough to get you naked…”

Bruno then answered another question and Ben asked him: “Would you like to play or pass?” And he asked to play in drop zone one. 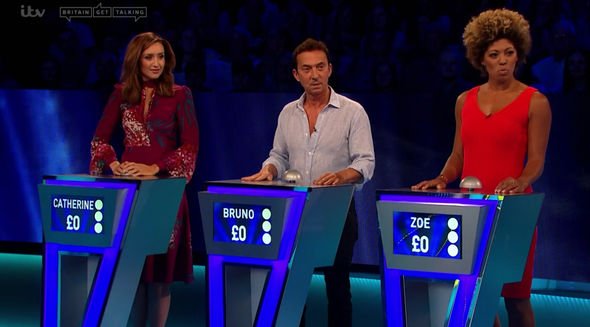 The machine was fired up and Bruno released the counter.

“That looks nice Bruno! Will it move that mystery counter? Is the top shelf ready though?’ Ben commentated as the counter joined the several others on the top line.

“What is going on?” Bruno asked when no counters dropped, and Ben explained: “You just shuffled the shelf, wasn’t ready to pay out I’m afraid Bruno!”

Outraged, the dancer continued: “So I had no money? Oh this is ridiculous, but that’s not fair!”

Those watching at home saw Bruno’s counters set up success for his co-stars and understandably he wasn’t happy when their jackpots kept rising and his didn’t.

“Look that is not fair! That’s annoying!” He burst but Ben reassured him: “One counter did drop though Bruno.”

Dr Zoe then answered a question correctly and dropped a counter, Ben said: “Another five for you Zoe!”

“You’ve got the magic,” Bruno remarked as more counters fell.

Annoyed at his co-stars success, Bruno threw his hands into the air and pretended to walk off: “I’m going home, goodbye!”

“24 counters in round two, that’s a huge amount,” the presenter said.

With £600 between himself and Catherine, the actress had to beat Bruno in order to stay in the game.

After dropping her first counter, a whopping six counters fell and she beat Bruno, commenting on his departure Bruno said: “Goodbye everyone, it was just bad luck.”