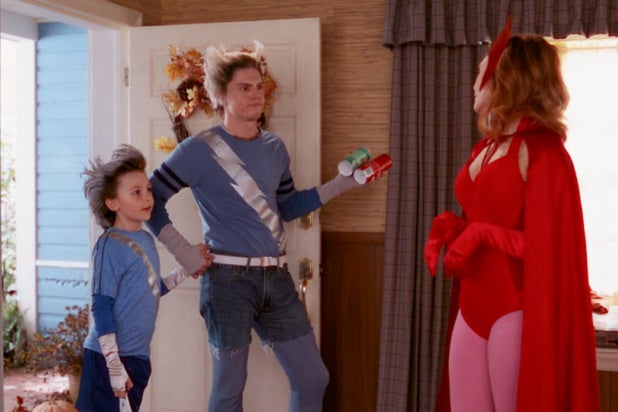 Pretty much everything in “WandaVision” remains pretty cryptic, even as so much is going on. The big point of discussion over the past week involves one Pietro Maximoff, as played by Evan Peters. Folks can’t help but wonder if his arrival on the scene marks the introduction of the X-Men franchise to the MCU, since Peters played Quicksilver in the “X-Men” movies while Aaron Taylor-Johnson played the role in the MCU.

We’ve got a pretty beefy discussion of that whole think you can read right here. But for now, I wanna put that aside and talk about Pietro’s best line of this week’s episode of “WandaVision.”

The line in question came in the midsection of the episode, while Pietro and Wanda are out trick-or-treating with Wanda’s twins. Wanda doesn’t seem sure what Pietro’s deal is – but unfortunately neither is Pietro himself.

“The details are fuzzy, man,” he explains. “I got shot like a chump on the street for no reason at all, and the next thing I know I heard you calling me.”

That is, without a doubt, the MCU acknowledging a particular complaint that so many fans have had about “Age of Ultron” since day one: that Pietro’s death was pretty random. In case you’ve forgotten the details of that scene, you can refresh your memory here.

It’s always been a pretty annoying thing with “Ultron.” Interjected into the middle of the big battle at the end of the movie is this brief sequence in which one of the Ultron bots is flying around in a jet shooting at the ground. Pietro gets shot while he pushes a car in front of Hawkeye, who is holding a small child at that moment.

The problem is that this sequence isn’t earned. It’s not part of any of the various different threads that play out during the battle. It’s just a random extra thing that happens that doesn’t really fit with the flow of the sequence. Instead it feels tacked on, like something they added in reshoots.

So it’s nice, and pretty amusing, to see Pietro acknowledge the annoyance on “WandaVision.”

On top of that, the timing is kind of eerie. This week, “Ultron” director and writer Joss Whedon faced more accusations of abuse from former cast members, with “Buffy the Vampire Slayer” star Charisma Carpenter leading the way this time with some rough stories about the way Whedon treated her on the sets of “Buffy” and “Angel.”

The timing is just a coincidence, of course, since nobody involved with “WandaVision” could have known Whedon would be in the news this week.