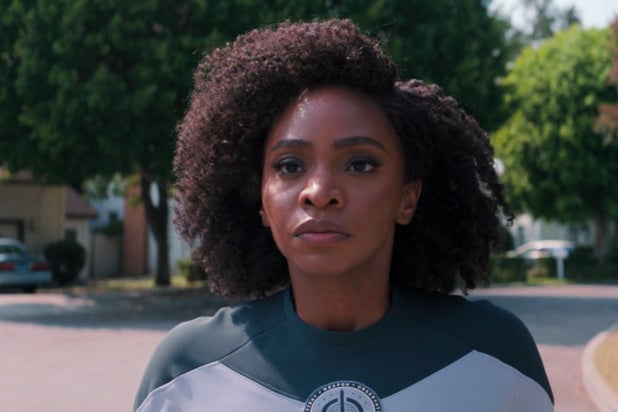 Since the Disney-Fox merger, fans have been wondering how the Marvel Cinematic Universe would bring the X-Men into the fold. We might have gotten an answer on “WandaVision” when Evan Peters, who played Pietro Maximoff aka Quicksilver in the “X-Men” films “Days of Future Past,” “Apocalypse” and “Dark Phoenix,” showed up at the very end. And now, Monica Rambeau’s arrival on the scene as the superhero Spectrum makes it seem more and more likely that this Pietro really could be Pietro.

For those out of the loop: Aaron Taylor-Johnson played Pietro in the MCU, not Peters — and the MCU version of Pietro died in “Avengers: Age of Ultron.” And so rather than Wanda (Elizabeth Olsen) bringing the MCU version of the character back to life the way she did with Vision (Paul Bettany), what we maybe, possibly just saw at the end of the fifth episode of “WandaVision” two weeks ago is the Fox version of the character crossing over. Maybe.

I’ve been skeptical about this, especially since “WandaVision” has only given us the barest of hints at whether Evan Peters is playing the real thing, or is just a part of this show as a fun piece of stunt casting. We have to consider the possibility that Marvel is messing with us here. But, in my opinion, the way that Monica got her superpowers points to the first option — that this really is Pietro, pulled in from another dimension.

Anyway, let’s consider the situation, starting with what we got this week in the seventh episode of “WandaVision.”

Pietro is actually pretty scarce this week, only making two brief appearances after Wanda threw him into a haystack in the last episode. While characters bring him up several times, it’s only because they don’t get what his deal is — there’s no really useful info in those brief mentions.

But he pops up twice at the end. First, during Agatha’s montage showing how she actually has been responsible for the madness in Westview this whole time. We specifically see that Agatha was controlling this ersatz Pietro when he first arrived at Wanda and Vision’s house.

Then, we see him again during a surprise mid-credits scene. Monica tracks Wanda to Agatha’s basement, and then Pietro pops up out of nowhere and say, “Snooper’s gonna snoop.” This is a cliffhanger for sure — we don’t know if he meant that comment in a menacing way or not. All that happens after that line is Monica looks at him in shock, and then it cuts to black.

So the core question here is whether Evan Peters is playing the Fox version of Pietro brought over to the MCU as some kind of multiverse shenanigans, or if this is all some kind of epic troll stunt casting from Marvel to mess with our heads. I don’t know what the truth is with this just yet, and neither does anyone else outside of Marve, but let’s consider the situation in front of us.

Agatha has seemingly dominated the minds of everyone in this town and forced them to play roles in a fake sitcom, and there’s certainly a distinct possibility that Pietro is another example of that. Peters could be playing not Quicksilver, but rather a random dude who lived in that town and is now being forced to play the part of Quicksilver.

On the other hand, this guy could be the Fox version of Quicksilver yanked out of his own universe by some means and forced to play the part of MCU Quicksilver.

Which brings me to a big clue: Pietro ran really fast in last week’s episode when he was trick-or-treating with the twins. This could be a point in favor of Evan Peters playing a real version of Pietro Maximoff and not just a nobody who became a puppet. But if Wanda’s power could reanimate Vision’s corpse and restore his sentience, then it seems likely she could also give somebody superpowers — or at least the appearance of superpowers.

But as mentioned up above, what happened with Monica Rambeau this week points more toward the possibility that this really is the Fox Pietro. This week, she became the first person to actually pierce the Hex surrounding Westview. Her effort was successful — and changed her in a big way.

Now, it’s not clear what exactly Monica’s new powers are just yet. She’s certainly strong — she was able to defy Wanda when she tried to toss Monica out of town again. Eventually, Monica should be just as powerful as Captain Marvel — Monica is definitely pretty cosmic in the comics — but she probably isn’t quite there yet.

It’s important to note that “WandaVision” may or may not have given Monica a completely fresh new source for her powers. This situation was certainly very different from her origin in the comics. But understanding her comic book origins could help us understand how this Evan Peters version of Pietro got here — and whether he’s really Pietro from the Fox “X-Men” movies.

As mentioned, Monica in the comics is on roughly the same level as Captain Marvel in terms of her powers — in fact, she was Captain Marvel for a little while back in the day. She has the ability to transform into any form of energy within the electromagnetic spectrum, which would obviously have many destructive possibilities, and can also fly, fire energy blasts, phase through solid matter like Vision, and make herself invisible.

In the comics, Monica gained her powers when a device capable of drawing energy from other dimensions exploded in her face, similar to the origins of the Carol Danvers’ Captain Marvel herself. But though Monica made her debut as the new Captain Marvel in the comics, she’s actually adopted several superhero aliases. In a 1996 storyline she started calling herself Photon; in 2006 she changed it Pulsar; and since 2010 she’s been best known as Spectrum. But yes, she still rocks an amazing black and white outfit.

That outfit, by the way, is why it’s very likely that Monica will go by Spectrum after “WandaVision,” rather than Photon — that S.W.O.R.D. outfit she was wearing is pretty much the Spectrum suit.

Now, on “WandaVision,” Monica gets her powers from the Hex barrier surrounding Westview. We basically knew nothing about the Hex before this week’s episode — but the fact that traveling through the Hex could turn her into Spectrum is a big clue. But before we can get to that we need to talk Agnes.

The fact that Agatha’s Hex has turned Monica into Spectrum means it very well could be that the Hex is fueled by multidimensional or multiversal energy. Agatha in the comics wouldn’t have that power, but Wanda did.

In the comics, Agatha helps Wanda unlock her true power as a Nexus Being, which is basically a person who is so powerful they can control reality on some level by altering fundamental probabilities of the universe — yes, that fake Nexus commercial we got this week is likely a reference to this. And as a Nexus Being, Wanda can draw power from other dimensions and universes.

So the Hex likely exists by Agatha’s command, but is still powered by Wanda. And if the Hex turned Monica Rambeau into Spectrum, then it seems very likely that its energy isn’t from the core universe of the MCU.

And that’s where Pietro could come in. Wanda is clearly not making conscious decisions regarding Westview, and it seems very much like her attempts to correct reality inside the Hex — we’ve seen her turn back time on a few different occasions — are driven more by her subconscious desires to suppress her trauma.

So if she’s channeling energy from the multiverse, and feeling sad about her dead brother because people keep talking about him, then it’s very possible that Wanda could have drawn this other Pietro from the “X-Men” universe over to the MCU without meaning to.

While the Pietro twist was totally out of left field at the time, rather than something that it felt like the show was building toward — there had really been zero hints about the multiverse up to the point in “WandaVision.” But now things are different. The Nexus commercial is absolutely a hint about the multiverse, and I feel that the creation of Spectrum through the Hex is another.

This is all circumstantial, of course — the MCU often makes big changes in its adaptations of the comic book source material, and it has never directly followed any comic book plot line in a straightforward way. But since we know the multiverse is coming to the MCU, and we know that “WandaVision” will supposedly lead into “Doctor Strange and the Multiverse of Madness,” there’s always been plenty of reason to assume the multiverse is in play here.

And now we actually have real clues pointing that direction.

Also, Kevin Feige and co. absolutely know how fans are going to react to this whole deal, and they know how much of a punch to the gut it would be if a moment this highly anticipated turned out to just be a fakeout. This would be a pretty insane way to mess with the audience if they just brought in Evan Peters as a gag. And it would certainly frustrate fans.

We’re now in the home stretch on “WandaVision,” with just two episodes remaining. We won’t have to wait very much longer to find out just how wrong I am about all of this.