Westworld is answering a lot of questions in season 3, specifically about Ed Harris’ character, The Man In Black, aka William. In the sixth episode of the season, the show brought Harris and Jimmi Simpson, who plays the young William together to narrate the character’s backstory. But during filming, Harris apparently broke Simpson’s finger. 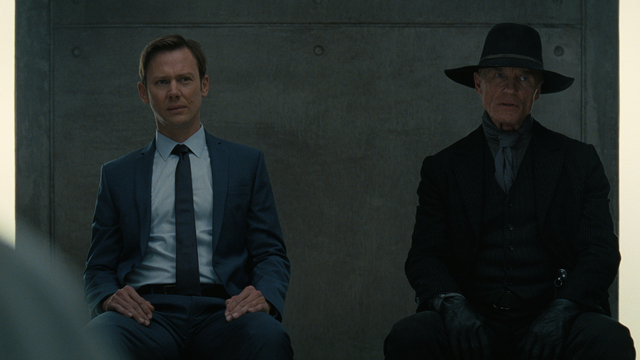 What happened in this eye-opening episode of ‘Westworld’?

Episode 6, titled “Decoherence,” brought The Man in Black (Ed Harris) back into the spotlight. He was left at a psychiatric rehab facility by Charlotte (Tessa Thompson), aka Charlores, under the direction of Dolores (Evan Rachel Wood). But while there, he continues to have hallucinations — some about his daughter Emily (Katja Herbers) and some about his childhood.

During a therapy session, after he lashes out and bites one of the attendants, The Man in Blak is sedated and put to sleep in his room. But while he is drugged, he has visions of his past. Ultimately, he sees various versions of himself throughout the years sitting around in a circle, wondering how he ended up the way he is.

If you can’t tell, does it matter?

One of those versions is William (Jimmi Simpson), the young man who fell in love with Dolores in season 1. But when his memories reveal that he was a violent child, The Man in Black realizes he needs to kill every other version of himself in order to put his demons to rest. Before he wakes, The Man in Black brutally attacks and kills all of his iterations, including William.

In an interview with ET, Simpson discussed what it was like filming the fight scene with Harris. “It was a brilliant thing to behold,” he said. “They had it worked out so beautifully and Ed Harris, he’s one of my favorite actors of all time. He’s that die-hard theater professional who, you’ll never see someone more prepared than Ed Harris. So, he’d come in and I think it was over two days, play himself, but four times.”

The actor also expressed how committed Harris was to the scene, and how he didn’t hold back any punches. But in all the chaos, Simpson said his finger was accidentally broken.

“I didn’t even tell him this, because I didn’t realize for two weeks, but after he gets done kicking my a**, Ed Harris is exhausted because he has given his all to this eradication of this young version of himself,” he said. “And so he’s just beating him silly. He got off of me and landed on my finger. Unfortunately, my pinky was sticking up and I broke my pinky that day.”

Simpson told the outlet that he didn’t tell Harris what happened because he didn’t want to interrupt the flow of the scene. “I didn’t tell him because I didn’t want to throw him off and make him frightened to come at me hard again,” he added. “I went to the doctor, and I had broken my pinky clean. I had no idea, but that’s the thing with Westworld, with Ed Harris — you get so sucked in. I was so, so deeply into the scene that I didn’t notice, and it just really translates too, huh? It looks great.”