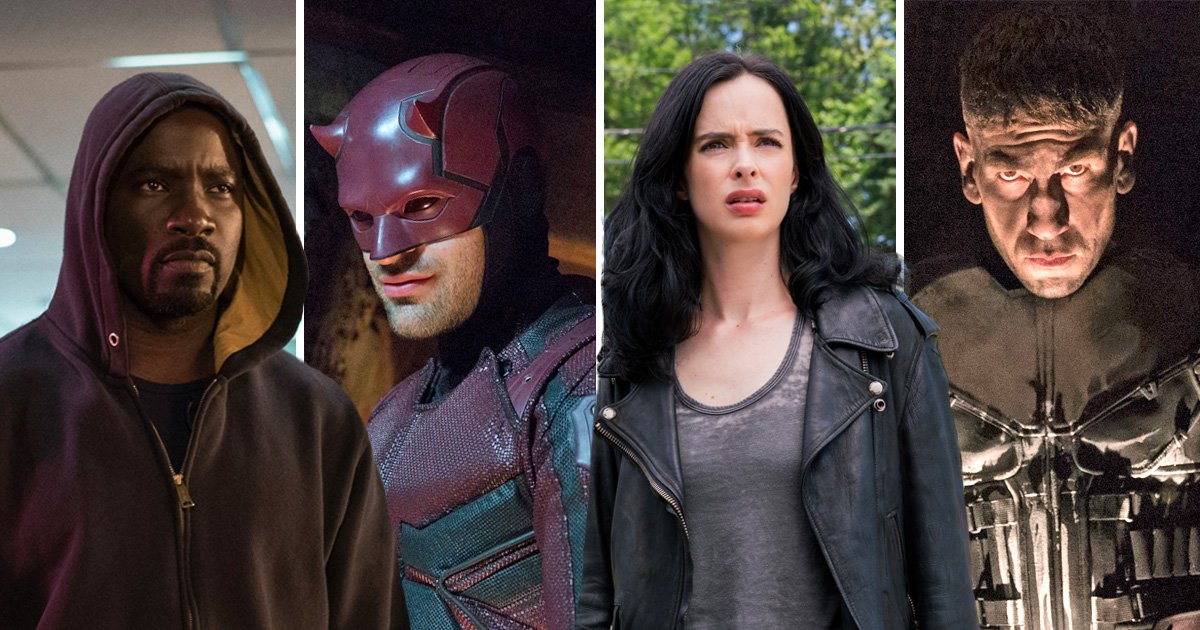 When Marvel shows including Daredevil, Jessica Jones, Luke Cage and The Punisher were cancelled on Netflix, fans were completely distraught.

However, the catalogue of series, including Iron Fist and The Defenders, are now joining rest of the MCU’s collection on Disney Plus in the UK.

Not only does this mean viewers will now be able to find all Marvel-related releases in one place, but the move has also sparked speculation that the characters could be reprised in the casts of upcoming superhero releases.

We have of course already seen Charlie Cox return as Matt Murdock, aka Daredevil, in Spider-Man: No Way Home, so it would be too far a stretch that we could predict returns for his fellow superpowered comrades.

While it’s inevitable that many fans may embark on a mega rewatch of all the shows once they arrive on the streaming platform, some people may be watching them for the first time.

For anyone who wishes to watch them in chronological order, here’s your ultimate guide.

What order to watch the Marvel Netflix shows on Disney Plus

The show that kickstarted Netflix’s Marvel releases, the first season of Daredevil was released all the way back in 2015.

Charlie was introduced as Matt, a blind lawyer by day and a crime-fighting, masked vigilante by night.

Matt – who was blinded as a child, gaining heightened senses – constantly feels conflicted about his purpose in life due to his devout Catholic faith.

He makes it his mission to defend Hell’s Kitchen, uncovering a criminal underworld where Wilson Fisk, otherwise known as the Kingpin (Vincent D’Onofrio), is the key player.

Netflix’s second Marvel launch came in the form of Jessica Jones, who in the present day is a rough-around-the-edges private investigator, with superhuman strength.

Jessica gained her abilities as a child, going on to briefly serve as a superhero.

However, an encounter with the villain Kilgrave (David Tennant) – who is able to control minds – changes the direction of her life completely.

When Kilgrave emerges once again from the shadows, Jessica must do what she can to stop the manipulative monster for good.

In the second season of Daredevil, Matt makes the acquaintance of Frank Castle (Jon Bernthal), who is nicknamed the Punisher due to his tendency to exact brutal punishment on those who he thinks deserve it.

Daredevil and the Punisher clash over their beliefs, as Matt strives not to take lives, while Frank has no qualms with dishing out the ultimate sentence.

A significant individual resurfaces from Matt’s past, ex-girlfriend Elektra Natchios (Élodie Yung), who ends up becoming embroiled in the lawyer’s crime-fighting mission.

Having been introduced in the first season of Jessica Jones, in 2016, Mike Colter fronted his own TV show as Luke Cage, who gained unbreakable, bulletproof skin after being experimented on.

Following his stint in prison, Luke is striving to rebuild his life in New York.

However, that’s not so easy when crime is lurking around the corner, making it even more difficult for him to uphold his reputation as a local hero.

When Danny Rand (Finn Jones) turns up at his family’s company in New York, he’s presumed to be a random man who’s wandered off the street, due to his dishevelled appearance.

However, that’s because no one recognises him after 15 years, having been presumed dead as a child.

In his absence, his family’s firm was taken over by Harold Meachum (David Wenham) and his children Ward (Tom Pelphrey) and Joy (Jessica Streachum), who he knew growing up.

What they don’t know is that after Danny survived an almost-fatal incident, he gained the ability to call on the mystical power of the Iron Fist, in addition to gaining a proficiency in martial arts that means he’s able to fight crime in the city.

Just five years after the Avengers were formed in the 2012 film, Netflix formed their own superhero team with The Defenders, bringing their four Marvel properties together for an unlikely union.

The group came together to fight a foe known as the Hand, an underground organisation who had previously been revealed as a threat in Daredevil and Jessica Jones.

After making his epic entrance in the second season of Daredevil, Marvel fans were clamouring for Jon to return as the Punisher in his very own show.

Their wish was fulfilled in 2017, as former Force Recon Marine Frank sought revenge for the devastating deaths of his family.

As a child, Jessica was raised alongside child star Trish Walker (Rachael Taylor) when she was orphaned, with the pair subsequently becoming best friends.

In the second season of the show, the protagonist made a shocking discovery about her family’s deaths, one that would drastically alter the trajectory of her life.

Luke was back for more bulletproof action in the second season of his show, with other returning cast members including police officer Misty Knight (Simone Missick), nurse Claire Temple (Rosario Dawson) and Alfre Woodard as antagonist Mariah Stokes-Dillard.

The superhero ends up gaining even more influence across Harlem as he tries his best to prevent new threats from rising up and gaining power.

In the second season of Iron Fist, which takes place after the events of The Defenders, Danny is still staying true to his mission of defending New York City from corruption.

He is joined by esteemed fighter Colleen Wing (Jessica Henwick), while he faces an old friend Davos (Sacha Dhawan) turning against him.

Having always felt torn over his crime-fighting and everyday personas, this inner conflict comes to a head in the third season of Daredevil for Matt.

By this point of his story, Kingpin has been released from prison, despite all the corruption he has inflicted on the city.

Matt goes missing for several months, as he suffers once again with his tumultuous emotional turmoil.

In the second and final season of The Punisher, Frank is divided over whether he should take on the role of the Punisher once more after a young girl called Amy Bendix (Giorgia Whigham) evades attempted murder.

In the final episodes of the show, Jessica and Trish are forced to face up against Gregory Sallinger (Jeremy Bobb), a man who is driven to prove that the superhero is a fraud.

Jessica has even more complications to contend with after Trish embarks on becoming a fearsome vigilante in her own right.

When do the Netflix shows arrive on Disney Plus in the UK?

The Marvel shows that originated on Netflix will be available to watch on Disney Plus from Wednesday March 16.