‘This has pushed me over the edge’: Office workers’ despair as Tesco puts the price of its lunchtime favourite £3 Meal Deal up by 50p

Office workers are ‘raging’ after Tesco announced its iconic Meal Deal is set to increase in price for the first time in 10 years – in yet another knock-on effect of Britain’s cost of living crisis.

The four million Brits who snap up the £3 offer each week – which consists of a sandwich, soft drink and snack – will now have to pay £3.50 for the items.

The supermarket giant revealed the 17 per cent boost on Friday, apparently believing the much-loved bargain is out of date, as the products would now cost up to £6 if bought separately.

However those who are Clubcard members – some 20 million shoppers – can still pay the old price and for the first time, Costa hot drinks will be part of the deal at 2,000 participating stores.

But social media users were quick to vent their despair at the announcement, with one saying: ‘This has pushed me over the edge’, while another branded it a ‘dark day for the United Kingdom’.

The Twitter user added: ‘Tesco should really reconsider its extreme and rash decision. 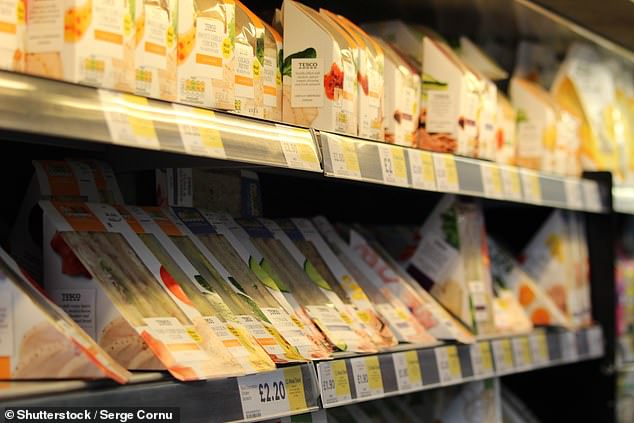 The four million Brits who snap up Tesco’s £3 Meal Deal offer each week – which consists of a sandwich, soft drink and snack – will now have to pay £3.50 for the items. (Stock image of Tesco sandwiches available in the deal) 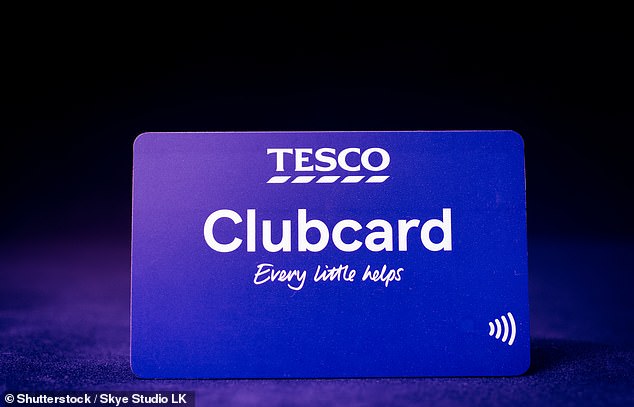 Those who are Clubcard members – some 20 million shoppers – can still pay the old price and for the first time, Costa hot drinks will be part of the deal at 2,000 participating stores. (Stock image of club card)

‘As an avid meal deal lover, this is sad news.’

Another branded it a ‘travesty’ while one said he was ‘raging’ as he vowed to protest his local branch.

One wrote: ‘I’m all for people living within their means and inflation is necessary but with everything going on, Tesco increasing their meal deals to £3.50 is too far!’

A Scottish user joked: ‘Am raging, no accepting this, you’ll find me outside the Ayr Tesco with a sign saying £3 meal deals.’

Around seven million Britons now get their daily lunches on the meal deals offered by chains including Boots and Sainsbury’s, bringing in more than £20 million.

A spokesman for Tesco told trade publication The Grocer: ‘Adding our ever-popular lunchtime meal deal to Clubcard Prices is the latest way we’re rewarding our 20 million Clubcard members with exclusive deals on thousands of products.

‘There are hundreds of products included in the lunchtime meal deal, which means more than 10 million delicious combinations available across more than 2,700 of our stores – all for £3 – offering unrivalled choice and availability for our customers.’

‘Raging’: Brits react on Twitter to the news that Tesco has increased the price of its meal deal to £3.50, with the move being branded a ‘travesty’ and ‘step too far’

It comes as another British staple – fish and chips – is also set to rocket in price due to inflation, tax hikes and soaring energy and transport costs, the latter of which will only worsen due to the war in Ukraine.

In fact industry experts warned Thursday that supplies of mushy peas, cod and haddock have already become the latest casualties of Britain’s cost of living crisis – which could soon push the price of a portion of fish and chips over the £10 mark.

Fish and chip lovers in the North East told MailOnline they feared any significant price hikes could kill local tourism and turn the simple dish into a once in a while treat.

Factors leading to price hikes also include smaller catches and a jump in global demand, particularly from America where buyers are hoovering up cod caught in waters around Norway.

London, Essex and Bristol are home to some of the most expensive chippies in the UK, while those tucking into their haddock further north in Newcastle or Liverpool can expect to pay less than £9 a portion

Chippy owners across the country have also pointed to skyrocketing electricity and packaging costs – with some reporting bills rising from £400 to £2,000 a month.

This week, the National Federation of Fish Friers warned that cod supplies have become 75 per cent more expensive compared to last October.

The cost of buying mushy peas has also doubled, the industry body said, while shops are suffering from soaring packaging prices and energy bills.

On top of this, there will also be a return to 20 per cent VAT from April, potentially pushing the price of your fish supper over a tenner.

But there are already stark differences in the cost of a portion of cod and chips, depending on which part of the country you live.

London may often be ridiculed for exorbitant prices, but buying fish and chips appears to be largely in line with the rest of the country. A large cod and chips can cost around £9.90 in the capital, just ten pence under the expected new rise.

But in Greenwich, some fish bars are selling large cod and chips for almost £13 already.

Dearken Denktash, 46, owner of The Pier Fish and Chips on Greenwich Church Street, put his prices up today by 50p meaning a medium cod and chips had gone up to £7.95.

He said: ‘I actually put my prices up today because my council tax has increased. 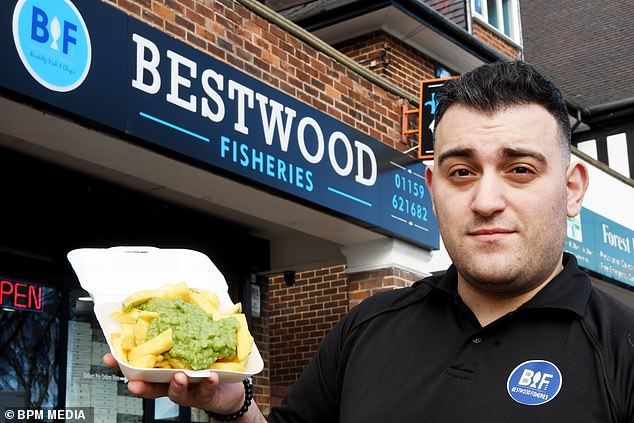 Antoni Tsiolas (pictured) who runs Bestwood Fisheries in Nottinghamshire, fears for the future of mushy peas as wholesale costs continue to soar

‘If the government are going to increase the energy prices and cost of living for us, that means we have to increase the food prices for you guys. It’s a bit of a catch 22 situation but that’s how business works.’

Meanwhile, a large cod and chips can cost punters as little as £7.95 in Newcastle, while cod-lovers living in Cardiff can expect to pay just £7 for a large fish and chips.

In Bristol and Essex, a large haddock and chips could set you back an eye-watering £11.40. But in coastal hotspots renowned for their local catches such as Blackpool, the price is significantly lower at £8.10.

Across the border, the average price of a fish supper has remained just under £10 in both Glasgow (£9.95) and Edinburgh (£9).

And Belfast, a normal portion of cod and chips (£7.30) would comfortably give you change from a ten pound note at present.

Fish bar proprietors and those living in sea-front towns across Britain have also warned of the impact price hikes could have on tourism in their areas.