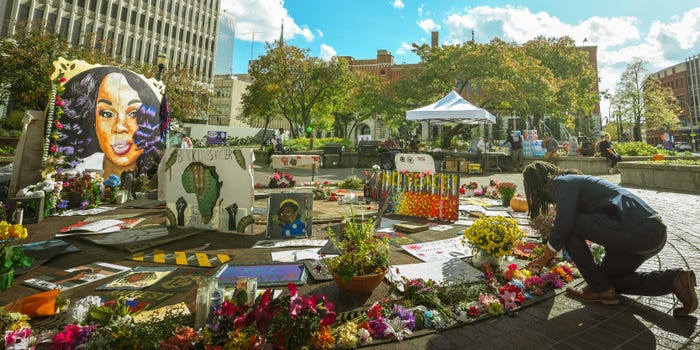 A member of a grand jury for Breonna Taylor's case is the latest to come forward and told the Associated Press in an interview that "there should've been more charges" for the Louisville officers who were involved in Taylor's death and that they got "a slap on the wrist."

In late September, the grand jurors in Louisville only charged one officer — former Detective Brett Hankison, who was fired from the force —  with three counts of wanton endangerment for shooting into Taylor's neighbor's apartment.

Sgt. Jonathan Mattingly and Detective Myles Cosgrove were not charged, and in a press conference, Kentucky Attorney General Daniel Cameron said that the jury agreed they were "justified in their return of deadly fire" with Taylor's boyfriend Kenneth Walker. Walker told investigators that he did not hear the officers identify themselves as "police," and he fired at the officers as they forced their way into their Louisville, Kentucky, apartment on a no-knock warrant.

Taylor, a 26-year-old essential worker, died in her apartment as the officers executed the no-knock warrant search. During the press conference, Cameron said that said Cosgrove's bullet killed Taylor that night.

Following that announcement, an anonymous grand juror countered Cameron's claims and came forward in October saying they weren't given the choice to charge the Louisville officers with homicide.

"The grand jury didn't agree that certain actions were justified," the juror stated in October. "The grand jury was not given the opportunity to deliberate on those [other] charges and deliberated only on what was presented to them."

Shortly after, an additional unidentified juror told Gayle King on "CBS This Morning" the way the officers handled the situation was "criminal" and backed the first juror's sentiments about the option for a murder charge.

According to the Associated Press, the woman agreed with her fellow jurors and wanted to speak out because she "didn't feel that the family was getting justice."

The only charges in the Breonna Taylor case are for shooting into her neighbor's apartment, not for killing her