Some of Central Australia’s most influential Aboriginal organisations have written a scathing open letter urging the Northern Territory’s Chief Minister to fully lock down the region as COVID-19 continues to spread through vulnerable remote communities.

The letter from the Central Australian Aboriginal Congress (CAAC), an Alice Springs-based health body, has accused the NT government of failing to implement plans that were agreed to before the outbreak and causing the virus to spread out of control in Indigenous communities. 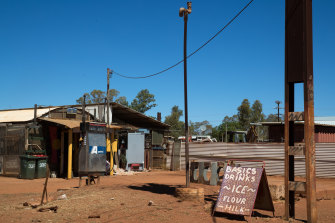 Yuendumu is currently in a ‘lockout’ as COVID-19 spreads through the NT.Credit:Janie Barrett

“We have been advocating continuously for firm action to slow the [Omicron] outbreak since it began in the early days of 2022,” the letter said. “However, our requests have been ignored, or action taken too late or on too small a scale to make a real difference.”

The group has accused the NT government of implementing mask mandates and a vaccine pass system too slowly, dumping responsibility for testing and contact tracing onto overburdened Aboriginal health organisations, and failing to isolate positive cases away from overcrowded housing.

"When positive cases were located in crowded households, they were left at home for more than 48 hours by which time the virus had spread within and between households and then to other town camps and houses," the letter said.

"This was in contravention of all agreed plans to remove positive cases immediately from households where they were unable to safely self-isolate."

The NT currently has more than 3200 active COVID-19 cases, after recording an additional 492 cases on Thursday. Around 90 per cent of the 84 people in hospital with the virus are Aboriginal.

According to federal government data, 78.8 per cent of all Indigenous people over the age of 16 in the NT are fully vaccinated, a total of 37,208 people. However, that’s fewer than half the total estimated NT Indigenous population of 74,546 people.

The open letter urged the NT government to immediately lock down all of Central Australia, distribute rapid antigen tests, stand up a rapid response team in the region to test and vaccinate people, and to ask the federal government and Defence Force for assistance.

NT Chief Minister Michael Gunner has been contacted for comment.

On Thursday NT Health Minister Natasha Fyles said she had received clinical advice that advised a wider lockdown in Central Australia was unnecessary.

Federal Health Minister Greg Hunt has also used his biosecurity powers to prevent people from entering or leaving several communities in the NT including Yuendumu, Yuelamu, and Amoonguna.

But the Health Department has not ruled out further biosecurity lockdowns.

“The Commonwealth is actively working with the Northern Territory government, land councils, the Aboriginal Medical Services Alliance of the NT and the National Aboriginal Community Controlled Health Organisation on the response to the Land Councils’ request for broader applications of the Biosecurity Act across remote communities in the NT,” a spokeswoman said.

"Given varied views by land councils, the Department is working to ascertain the proposed way forward."