An Aboriginal man who died in his cell at a Melbourne prison last month, two days after a suspected stroke, had gained 140 kilograms over the three years he was in custody.

Michael Suckling was found unresponsive in his cell on the morning of March 7 while in custody at Ravenhall Correctional Centre. 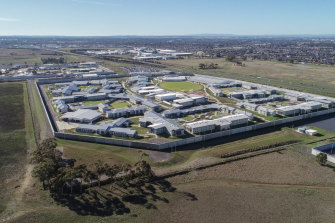 The 41-year-old had been in custody since January 2018 after he was charged with culpable driving causing death relating to a car crash in Castlemaine. He was later sentenced to 10 years and three months in prison.

About 7.25am on March 7, his cellmate noticed he had not roused during the morning wake-up and was lying on his side in his bed.

The cellmate asked another prisoner to come in and check on Mr Suckling and the pair realised he was not breathing. Prison staff were alerted and began CPR before ambulance officers arrived. He was declared dead at 7.50am.

The man’s death is now being investigated by the coroner. On Thursday morning, counsel assisting Ingrid Giles said the coroner was yet to receive the medical examination to determine whether Mr Suckling died of natural causes.

She told the court there were several key factors that appear to be relevant to Mr Suckling’s death.

He had moved cells the day before he died, and on March 5, two days before his death, he had a medical episode that was suspected to be a stroke.

“While the investigation is in its early stages, it has been stated that Michael refused any further medical treatment or testing, but was provided with a suite of medications,” said Ms Giles.

Mr Suckling was also morbidly obese at the time of his death, she said. He gained 140 kilograms from the time he entered custody in January 2018 to the day of his death, when he weighed 200 kilograms.

This meant he was unable to wear shoes, only slip-on scuffs, and sometimes needed a walking stick to move around.

Ms Giles said the coroner could consider whether the circumstances of Mr Suckling’s death – including issues around welfare or treatment in custody – warrant an inquest regardless of the medical cause of death.

Mr Suckling was one of four Indigenous people to die in custody in Australia in March. A fifth Indigenous man died in Western Australia over the Easter weekend.

Protests are set to be held across the country this weekend to mark 30 years since the Royal Commission into Aboriginal Deaths in Custody. Since the commission, at least 455 Indigenous people have lost their lives in custody.

Coroner Leveasque Peterson opened the directions hearing at the Coroners Court of Victoria on Thursday by acknowledging the anniversary.

“Next week will mark the 30th year since the findings from the Royal Commission into Aboriginal Deaths in Custody,” she said.

“Thirty years on we are still here and as the coroner on this matter, I respectfully provide my sincere condolences to all Aboriginal and Torres Strait Islander people and communities impacted from deaths in custody.

“As we approach the anniversary of the commission, I can only imagine the pain and trauma that many of our First Nations peoples are feeling at this time. My thoughts are with you.”

Mr Suckling is the first Aboriginal person to have died in Victoria since new practice directions were introduced in the Coroners Court in September last year, as part of a major overhaul of the way they investigate Indigenous deaths in custody.

The new protocols require a directions hearing within 28 days of the death, to streamline investigations and reduce delays.

Ms Giles also said that, in line with the new requirements, on the day of Mr Suckling’s death the coroner convened a discussion between Koori family engagement co-ordinator Troy Williamson and the man’s family.

Deaths in custody in Victoria result in mandatory investigations, but if the death is due to natural causes, a coroner is not required to conduct an inquest. This includes deaths within the prison system or while a person is in police custody.

The Victorian Aboriginal Legal Service has written to the coroner calling for an inquest to be held into Mr Suckling’s death, regardless of whether he died of natural causes, the court heard.

The co-operative said an inquest should consider the care, treatment and supervision of Mr Suckling while in custody.

Ms Peterson ordered a coronial brief to be served by July 9, and a further directions hearing will be held on August 23.