More than 1700 homes around the Dandenongs, Healesville and in the east of the state around Wonthaggi are facing their fourth day without power after they were hit by storms on Thursday. 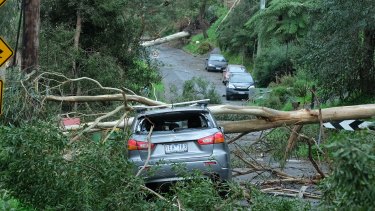 Belgrave’s Kaola Street on Friday after the storm. Credit:Luis Ascui

Power company AusNet and emergency services are working to restore power but their job was made more difficult by heavy winds on Sunday that caused power outages at approximately 2200 homes.

The heaviest gust, 122km/h, was recorded at Wilsons Promontory while winds were recorded at speeds more than 100km/h near the Grampians and at Mount Hotham.

In the city, St Kilda recorded an 85km/h gust and there was a 70km/h wind recorded at Frankston.

"There was another front that came in that brought some pretty strong winds," Miriam Bradbury, senior forecaster at the Bureau of Meteorology, said.

The weather system brought heavy winds but minimal rain. Rainfall totals were below 5mm in much of the state. About 10mm of rain fell in central parts of the state and in parts of Gippsland.

"We're expecting more settled days ahead due to high-pressure system moving across. Generally, there will be isolated showers in the state today easing in afternoon – 2mm or less," Ms Bradbury said.

"It should be a much calmer feeling today but it'll be pretty cool, generally between 12-15 degrees."

The bureau expects Melbourne to reach a top of 15 degrees on Tuesday for the first day of spring before warming up to 21 on Wednesday and 19 on Thursday.

On the weekend, a spokeswoman for the state government reminded those affected by the outages that they were allowed to travel to family's houses for assistance.

Meanwhile, all Melburnians are able to drink tap water again after they were encouraged to boil their water due to potentially contaminated water.

The Silvan Dam – one of the main water supplies for the city's northern and eastern suburbs – lost power during a wild wind storm on Thursday and a back-up generator also failed, allowing potentially contaminated water to be pumped into homes.