BORIS Johnson yesterday vowed to end ­lockdown “once and for all” ahead of today’s first anniversary.

The PM warned a third Covid wave in Europe would “wash up on our shores”, but hailed our jabs success and national spirit. 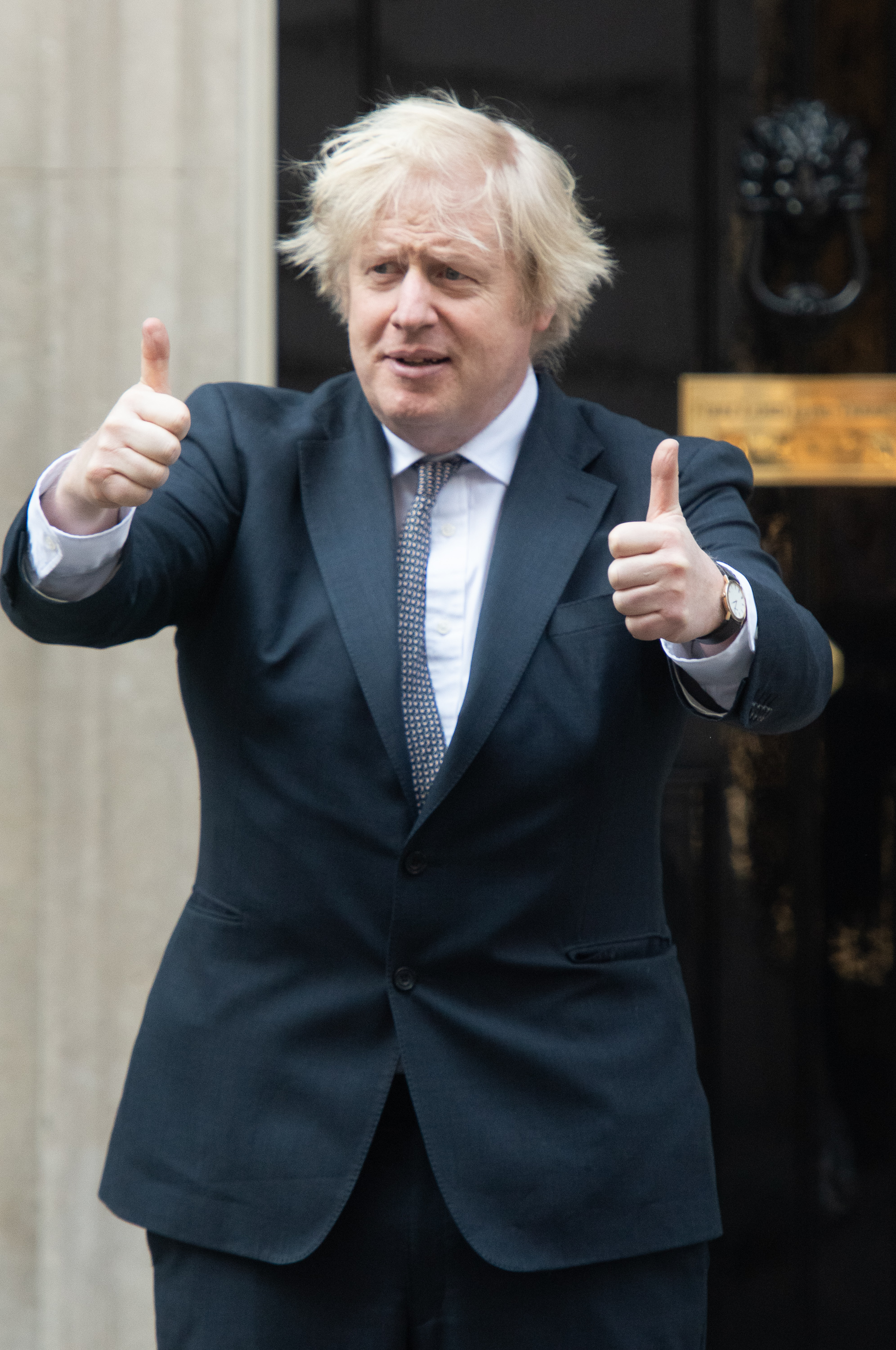 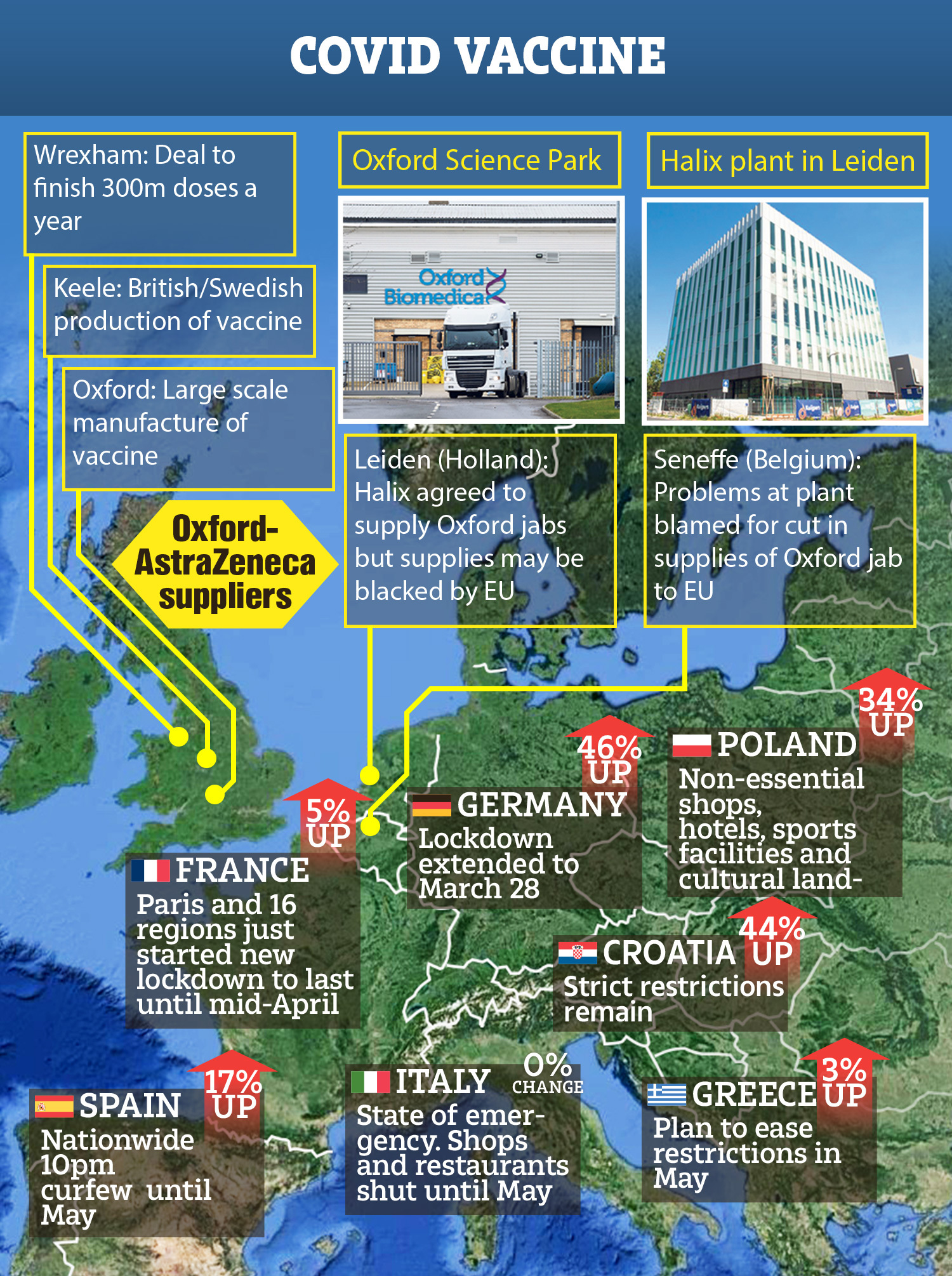 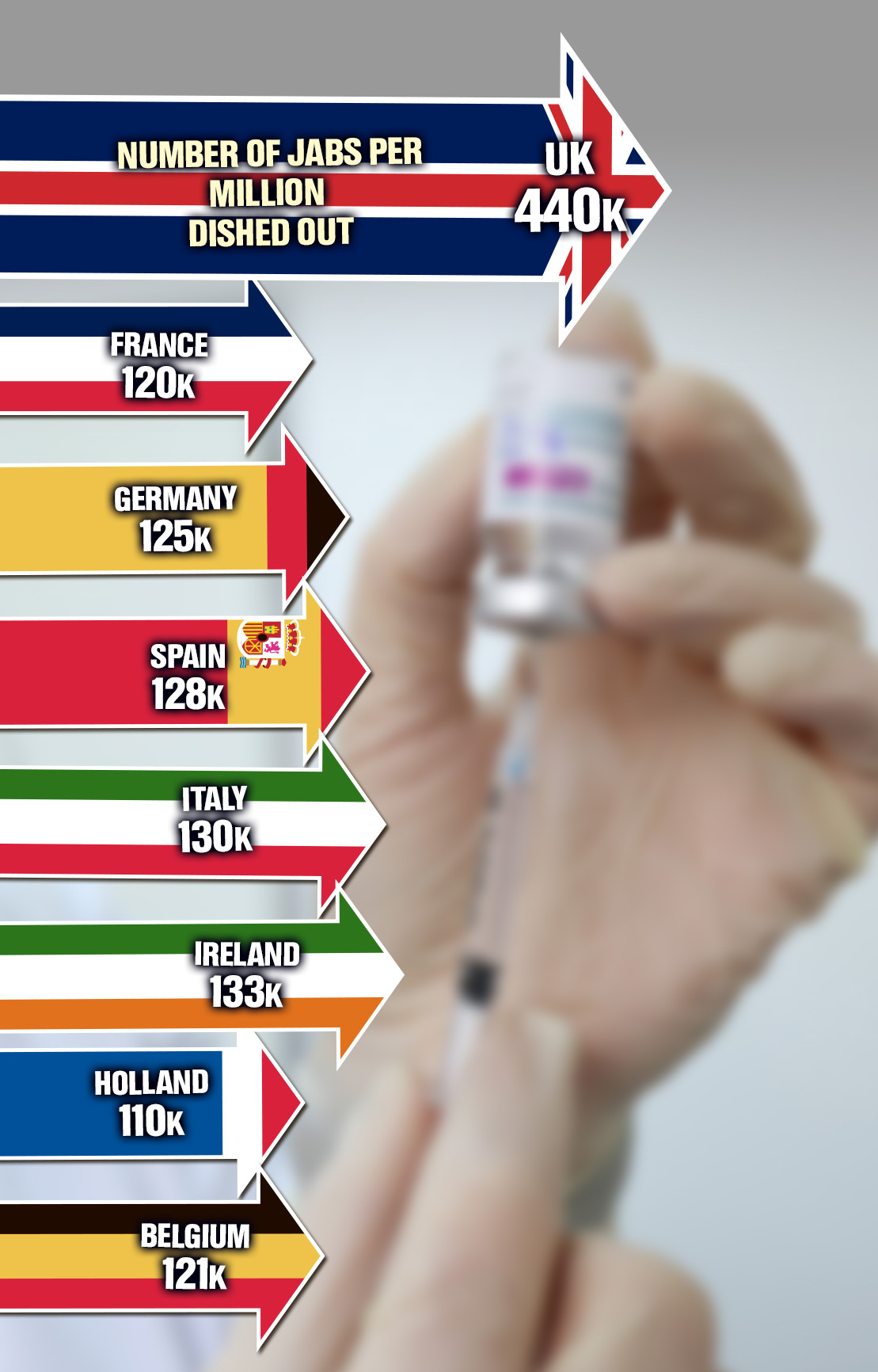 He also called for calm amid barmy EU threats of a vaccine export ban on the UK.

The PM personally phoned Brussels leaders to urge them to dial down the rhetoric in the supply row.

As the EU splintered over whether to seize AstraZeneca doses coming to the UK, ministers privately warned they would have no choice but to retaliate on jab ingredients flowing to the continent.

Boris declared he could “bash on” with his route to freedom thanks to our jabs success.

But the stakes could not be higher, with Mr Johnson issuing a stark warning last night of the third wave sweeping the continent.

The PM told reporters: “Previous experience has taught us that when a wave hits our friends, I’m afraid it washes up on our shores as well and expect we will feel those effects in due course.”

Mr Johnson will join a minute’s silence today in tribute to the 125,000 lost to the virus.

Last year was “one of the most difficult” in the history of Britain, the PM said as the nation prepared to stand still at noon to remember the dead. 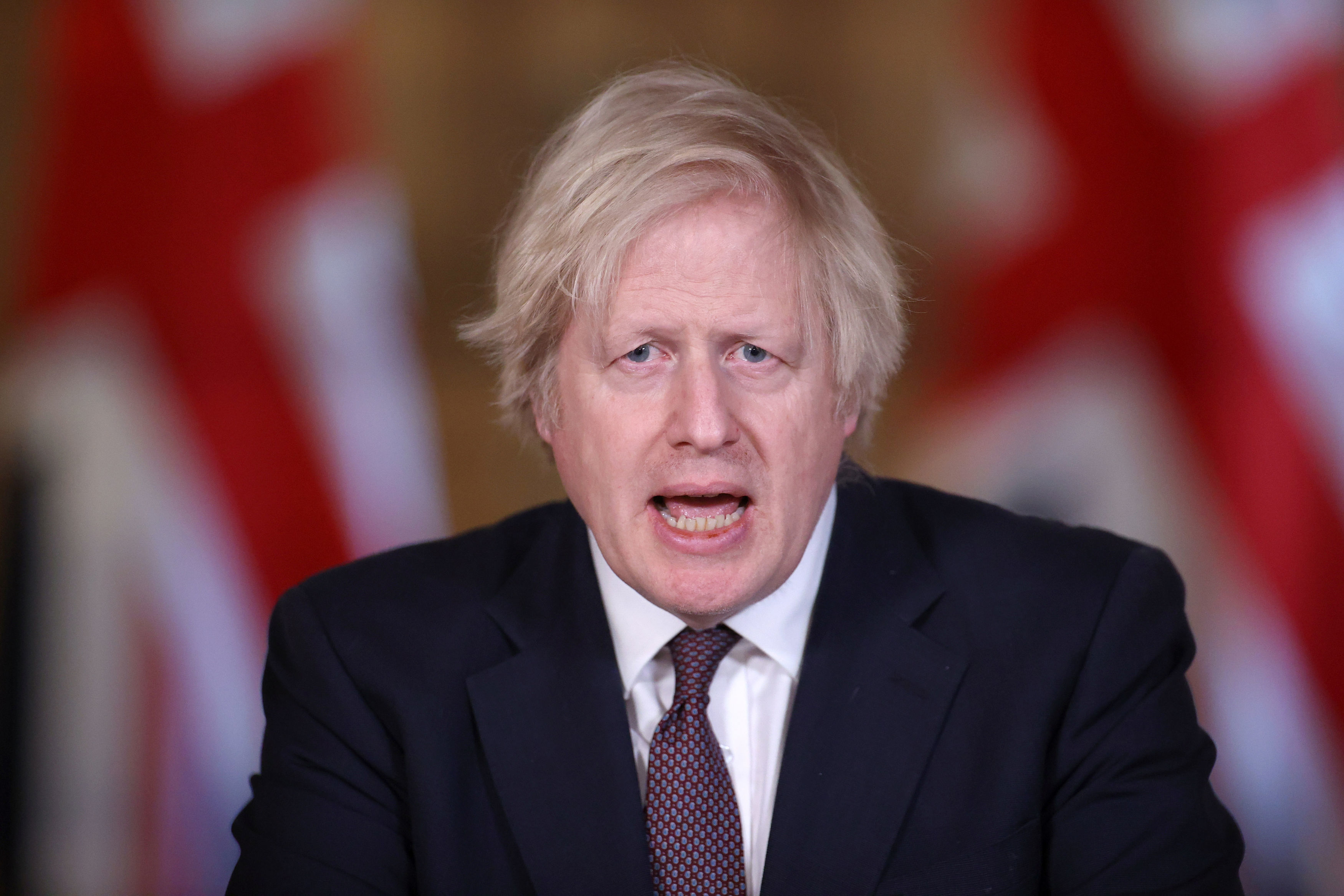 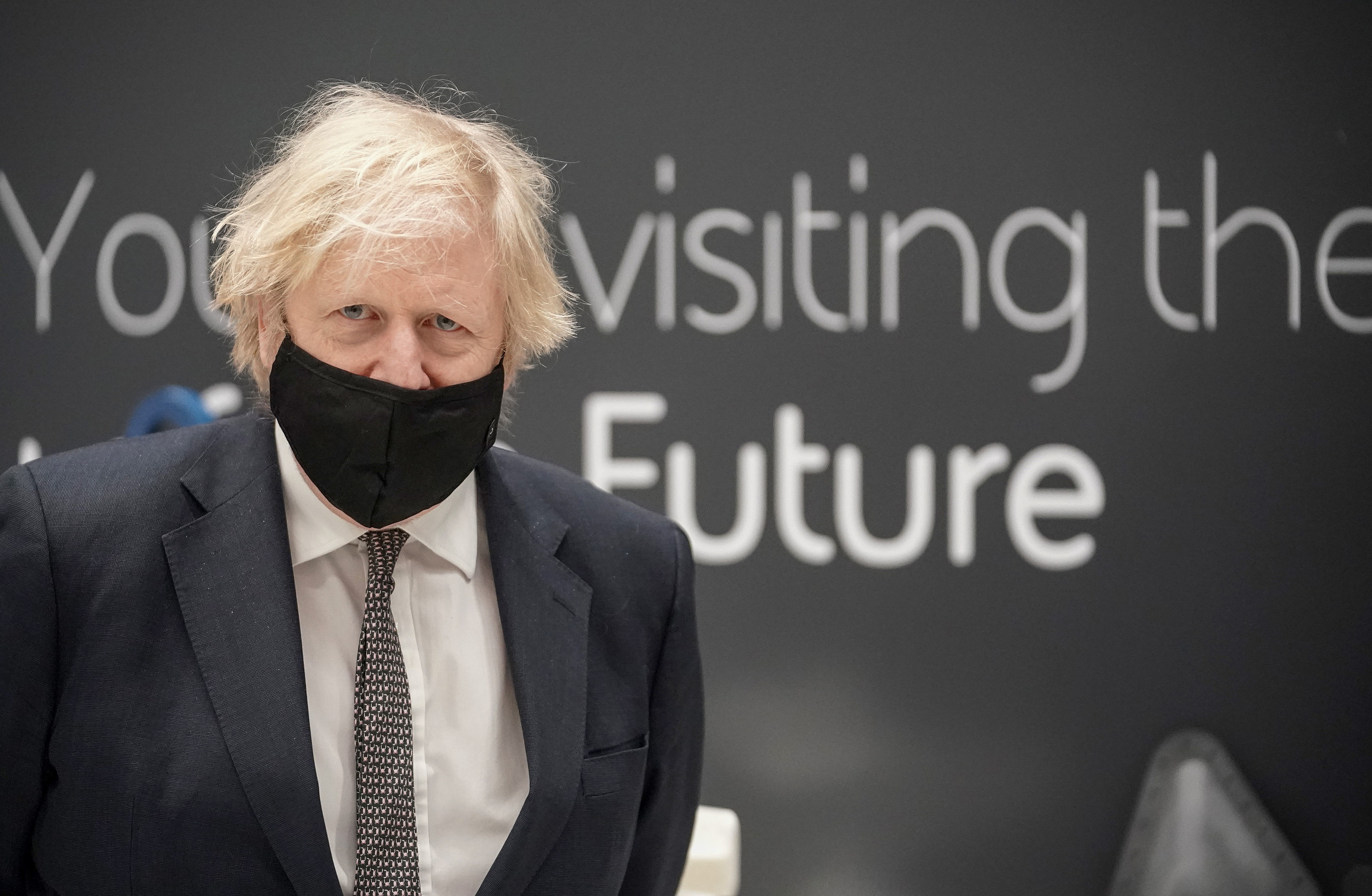 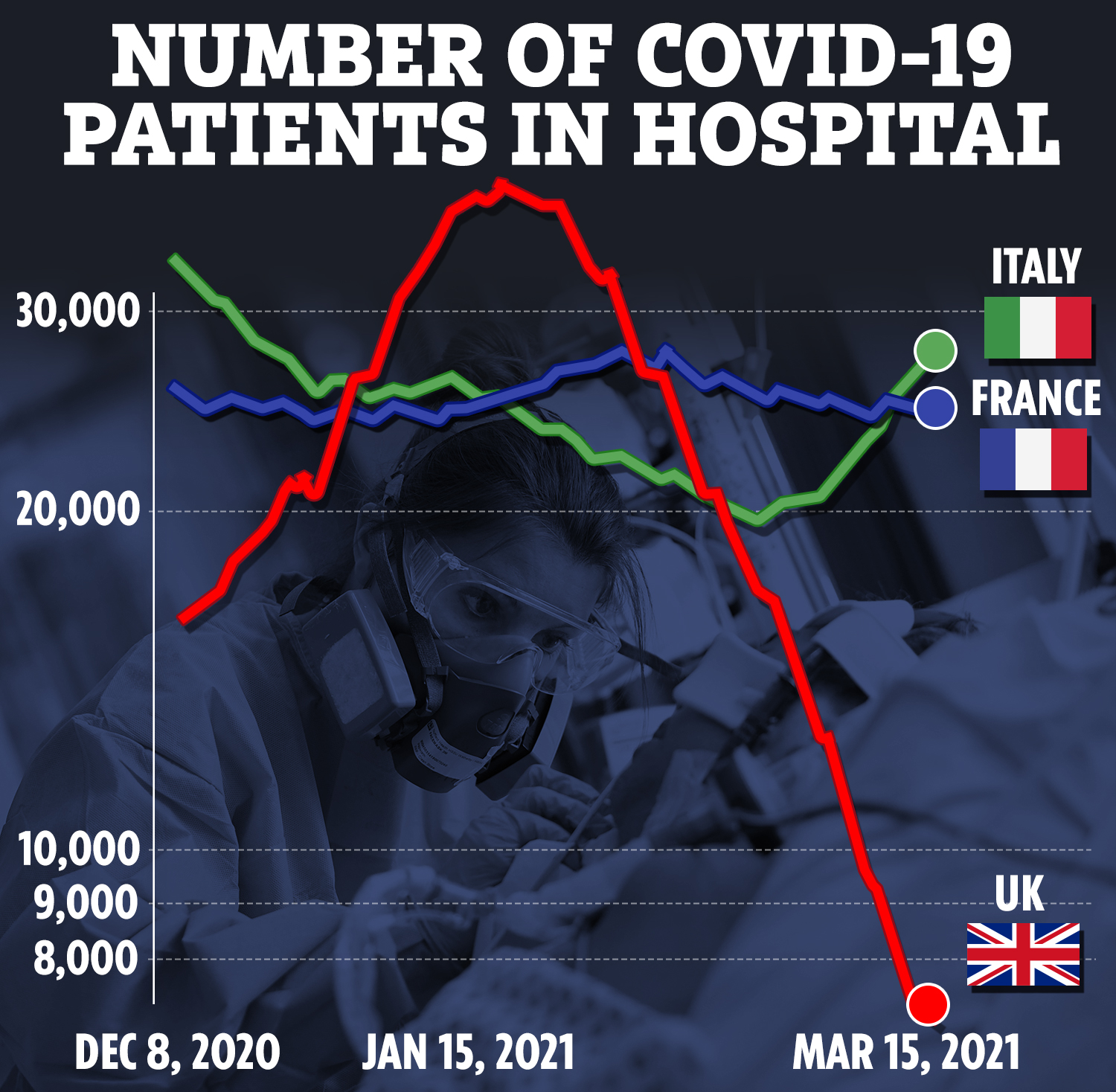 Church bells will then chime and iconic landmarks will be lit up at 8pm across the UK in tribute.

The movement, spearheaded by Marie Curie and the Together Coalition, will bring together 200 organisations from across the country to “mourn as a nation”.

The PM added: “We should also remember the great spirit shown by our nation over this past year.

"We have all played our part, whether it’s working on the front line as a nurse or carer, working on vaccine development and supply, helping to get that jab into arms, home schooling your children, or just by staying at home to prevent the spread of the virus.

“It’s because of every person in this country that lives have been saved, our NHS was protected, and we have started on our cautious road to easing restrictions once and for all.”

We should also remember the great spirit shown by our nation over this past year.

Meanwhile, he spent yesterday and Sunday attempting to calm tensions with Brussels after the EU doubled down on commission president Ursula von der Leyen’s jabs blockade threat amid its own bungled plans.

In a coded threat Britain could retaliate, he insisted the vaccines “require international co-operation”.

But last night, he said: “I am reassured by talking to EU partners over the last few months that they don’t want to see blockades, and that is very, very important.” 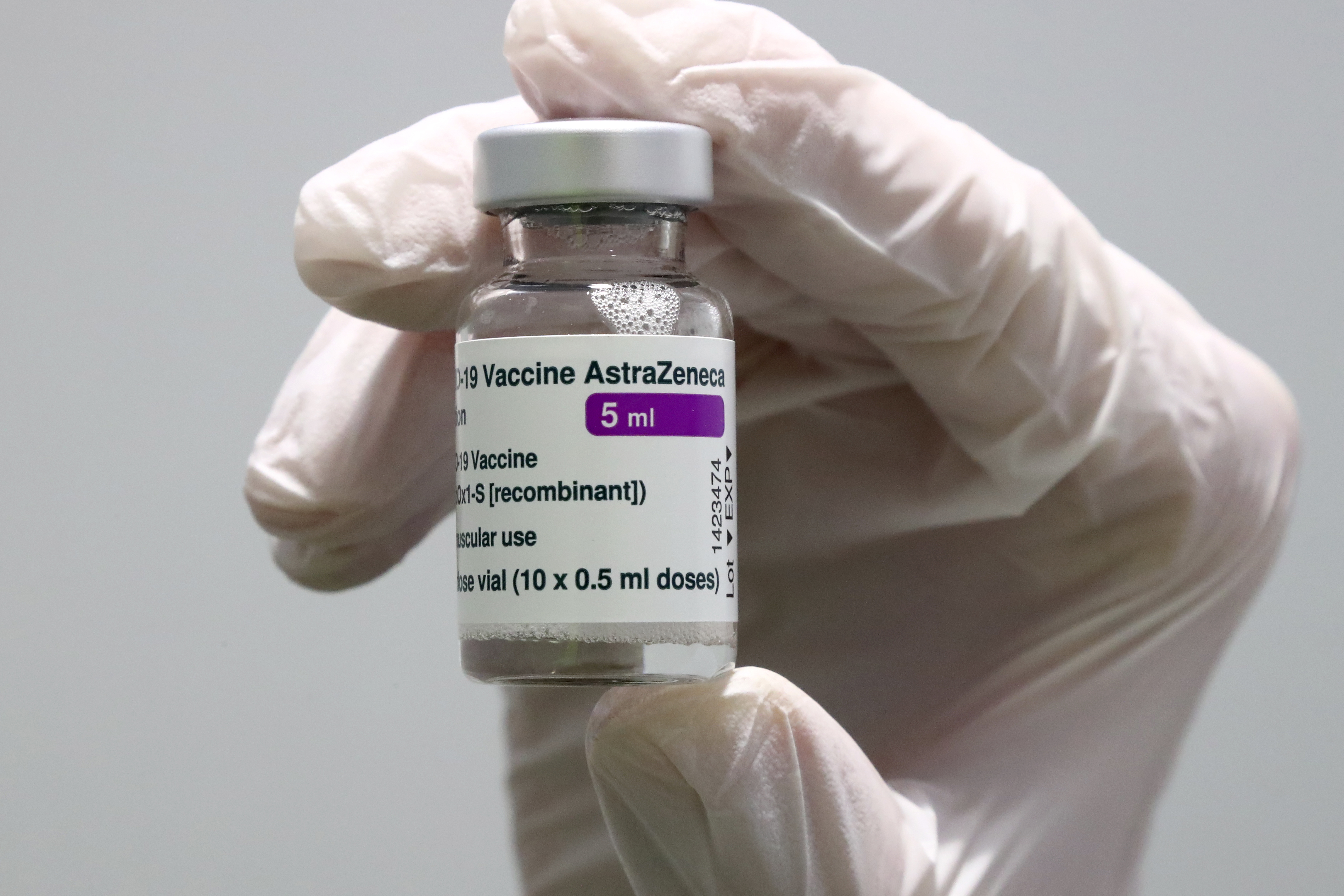 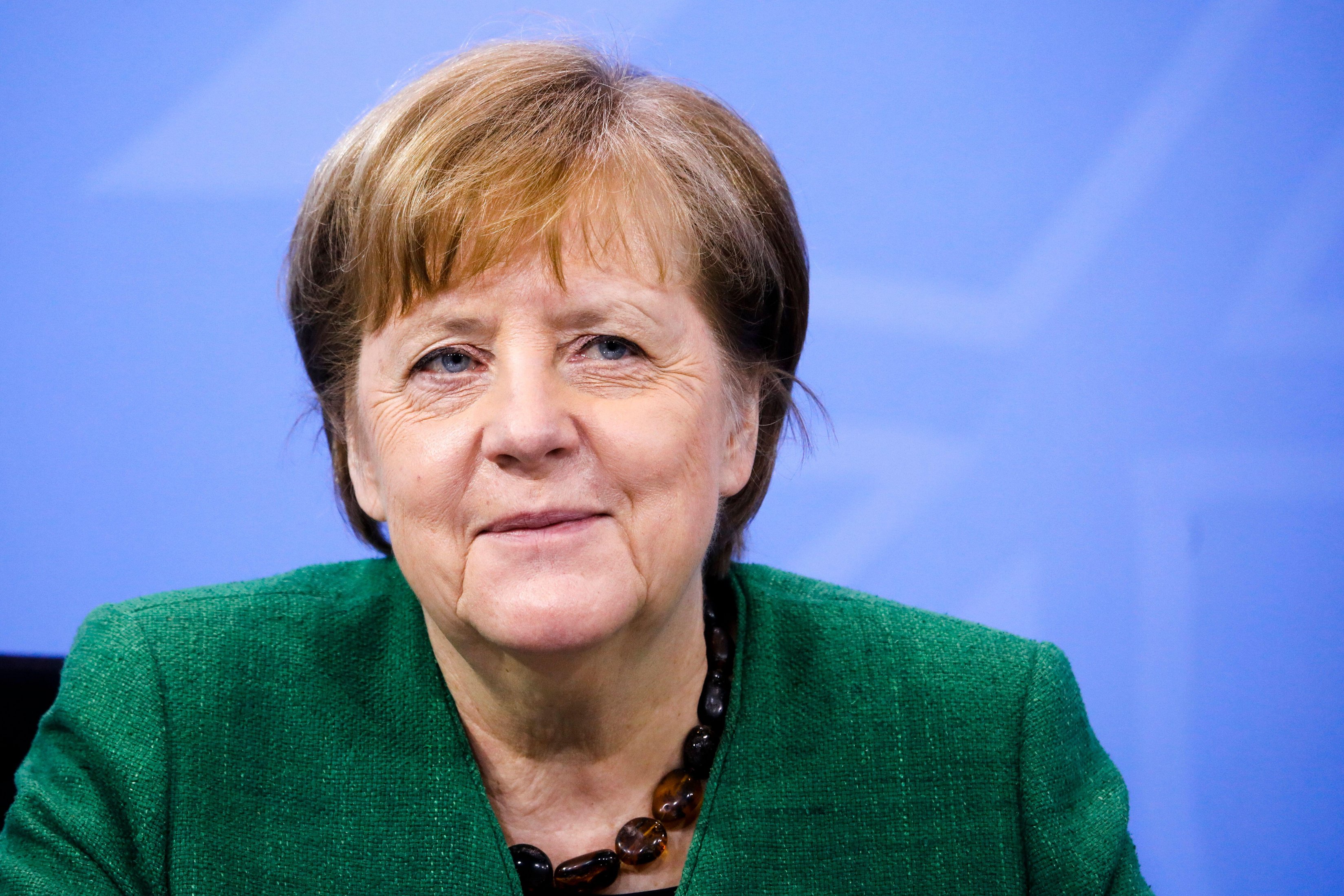 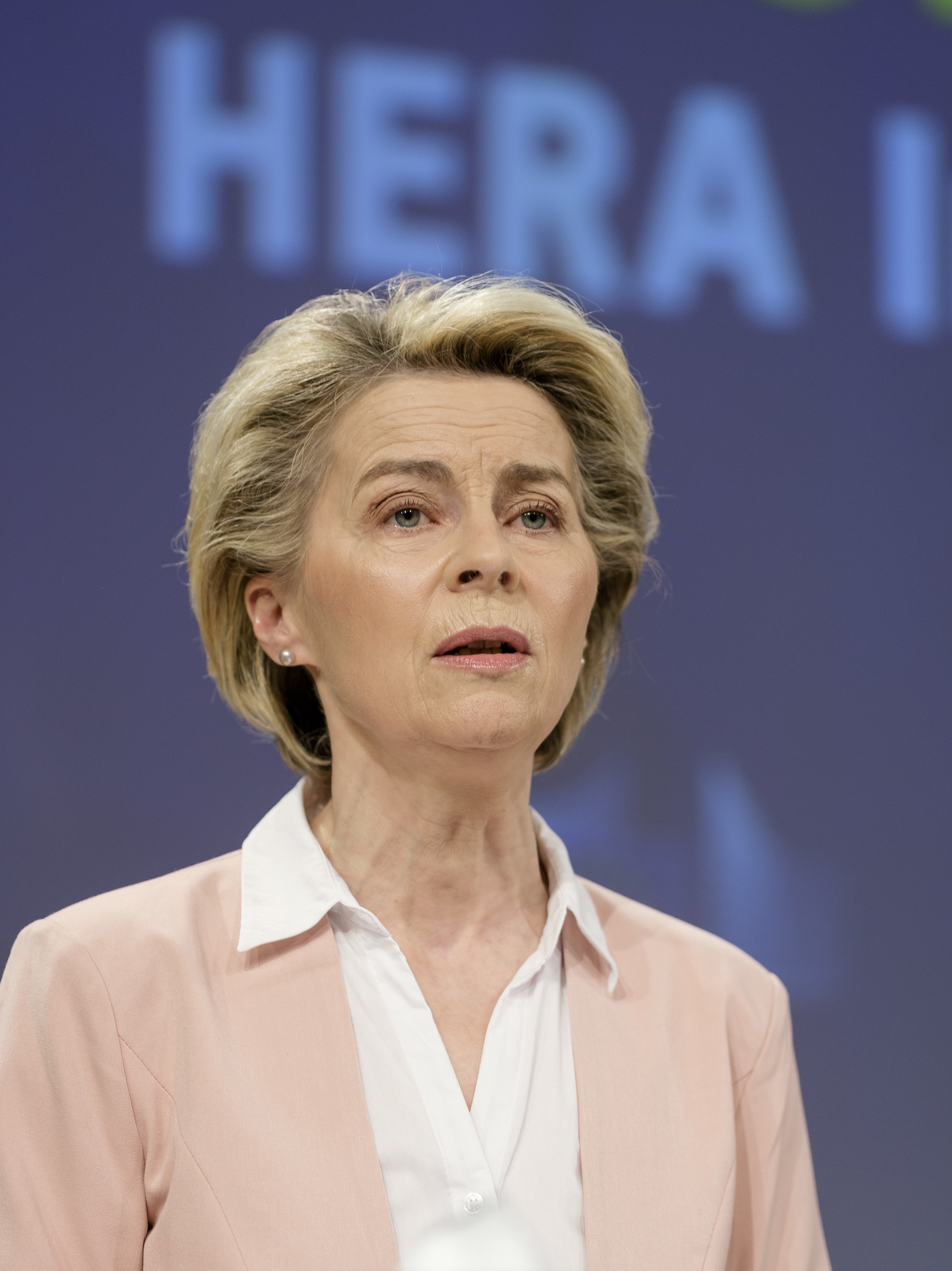 And in a positive development for No10, AstraZeneca claimed that Britain was not reliant on Europe for delivery of its 100 million order of Oxford Covid jabs.

The pharma giant said the vast majority of its UK doses are being manufactured in Britain.

Bosses said only one vaccine batch, reportedly enough to bottle several million doses, was expected to arrive from the Holland site.

The UK also has a contract for 40 million doses of the Pfizer jab, which is made in Belgium.

'WE WILL BASH ON'

But officials say the majority of the order has already been jabbed into Brits’ arms or has arrived in the country.

Former England football star Gary Pallister, 55, was seen getting his jab in Middlesbrough yesterday as Britain’s vaccine plans were still very much alive and kicking.

And the PM insisted: “We will just bash on with the roadmap we set out, with the programme we’ve got.”

Privately, ministers admit that the UK would have “no choice” but to block vaccine ingredient exports to the continent if the EU triggers a full-blown jab export ban as threatened.

One told The Sun “the British public would not put up” with anything else. 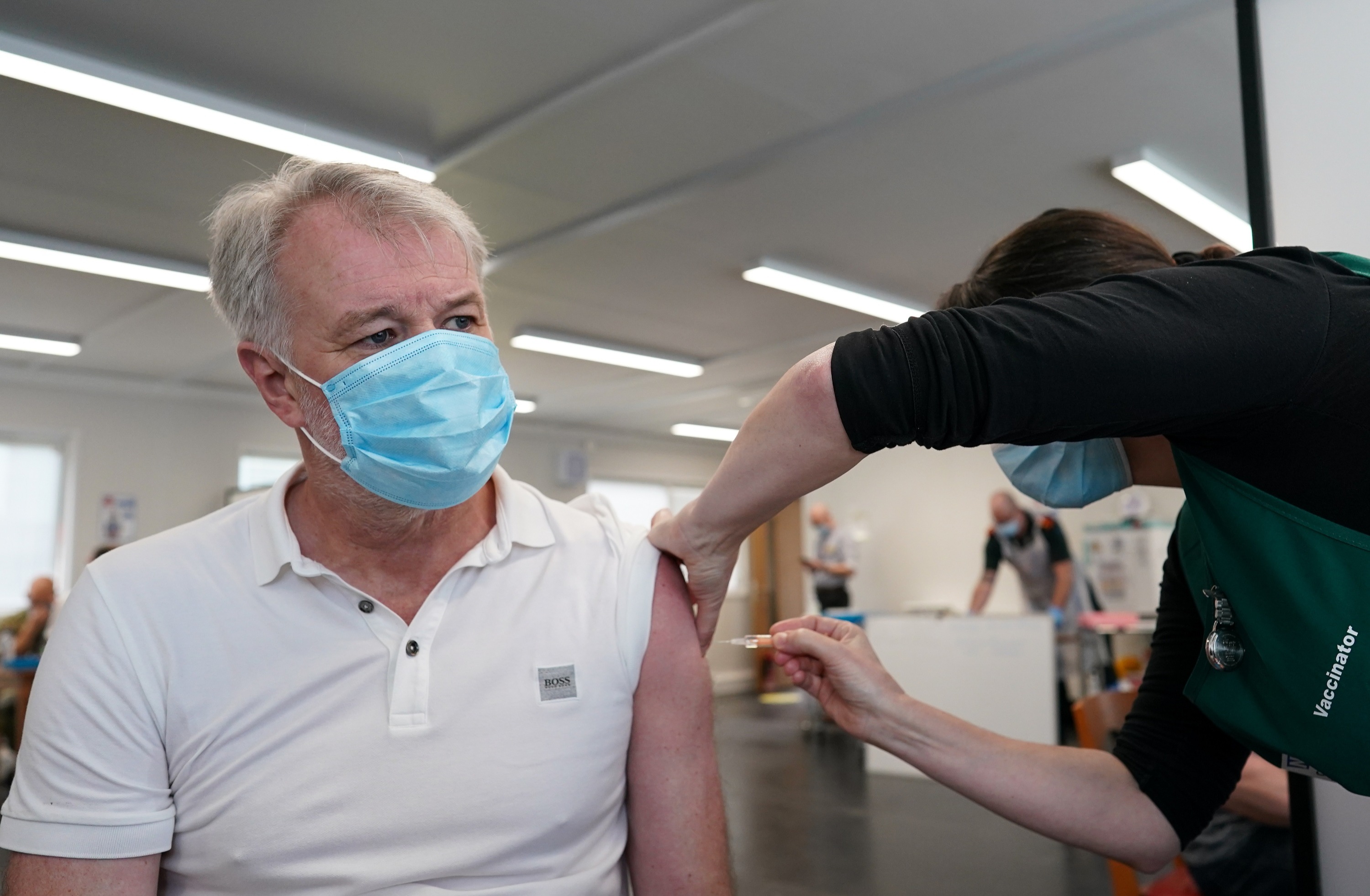 BORIS Johnson is trying to be diplomatic in the face of deranged EU provocation. Good luck with that, PM.

But we fear it will not suffice to take the moral high ground and be more statesmanlike than the clowns in Brussels and the capitals of Europe.

If they block vital vaccines reaching us, we must retaliate to persuade them to change course. Even by holding their Pfizer jab ingredients at the UK factory.

Give Northern Ireland border checks the boot for the foreseeable too.

The PM’s warmth towards our “European friends and allies” is a triumph of hope over experience. Their habitual aggression from the instant we voted Leave in 2016 has erupted into naked hostility more redolent of a rogue state.

A huge US study now says the Oxford AstraZeneca jab is totally safe and near-miraculous in its protective powers. But EU leaders, terrified by Brexit Britain’s vaccine success, have already falsely convinced millions it’s a dud.

So millions of vials sit untouched in EU fridges. But they are hell-bent on securing more, demanding AstraZeneca breaks its watertight UK contract to supply them instead.

These are life-saving drugs we part-funded and ordered from a private company. The EU knows it has no legal right to them. It aims to steal them, even to block ALL jab exports to Britain.

Why deprive a neighbouring country of a vaccine you do not intend to use? For one reason only: To handicap our rollout, even though more Brits will die.

The EU’s Brexit derangement may last years. Much sooner, its misled citizens will note our soaring Oxford jab totals and plummeting Covid deaths and wonder if, just maybe, the two are linked.

For the time being Britain must ­re- focus, and concentrate our trade, on our true friends around the world.

And if Brussels begins its blockade, the pain should reluctantly be reciprocated.

But there were some signs Mr Johnson’s efforts were working as a noisy rebellion from other countries over the export ban plan grew.

An EU official added that Britain was “not to blame” for the stand-off with AstraZeneca over vaccine supplies. 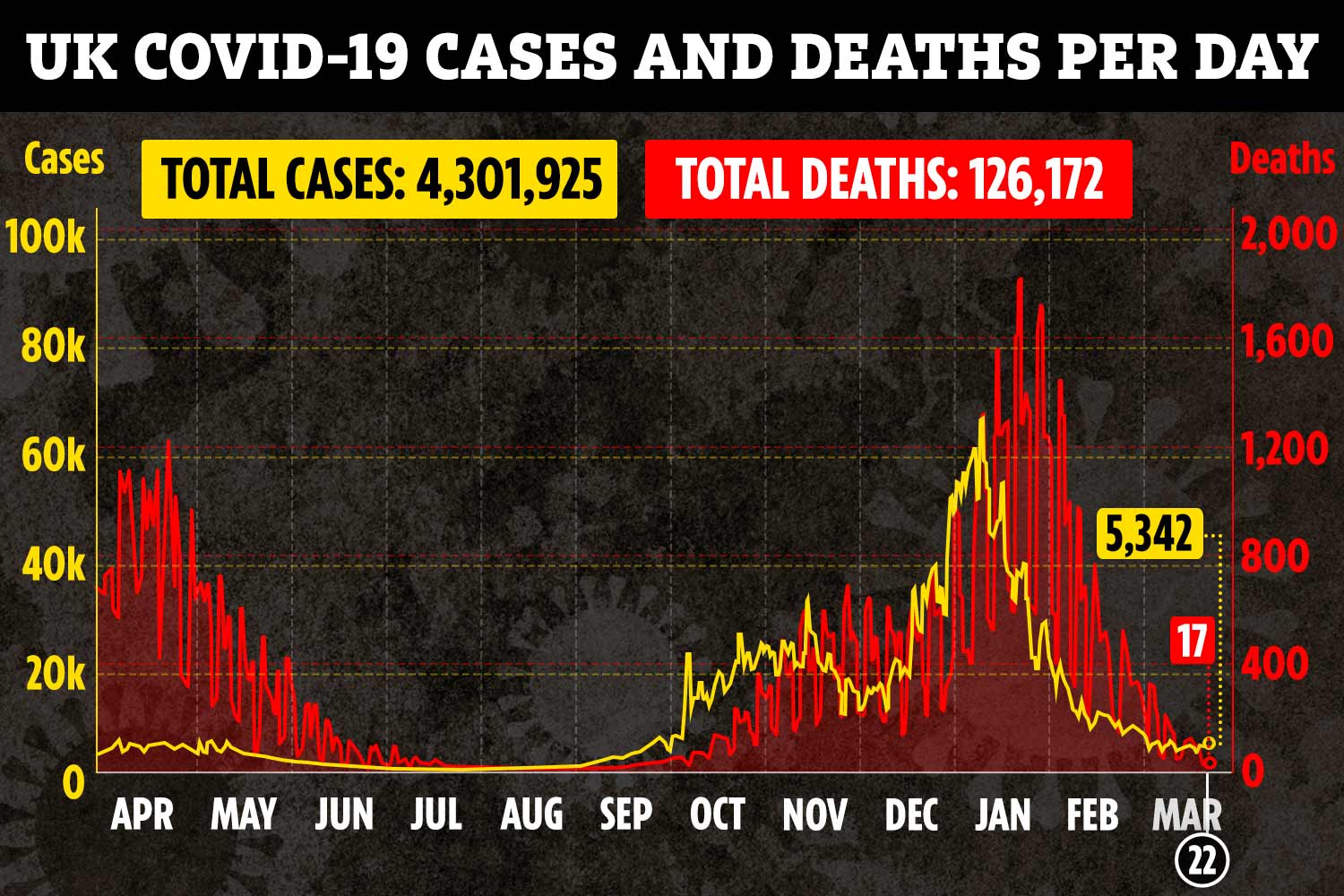