Beijing: New polling from the Pew Research Centre shows strong negative attitudes among Americans towards China, with almost nine out of 10 adults seeing the country as hostile or a danger to US interests.

Negative feelings have increased over human rights, economic friction, China’s authoritarian Communist Party political system and perceptions that China wishes to supplant the US as the world’s sole superpower, according to the survey results released on Friday (AEDT). 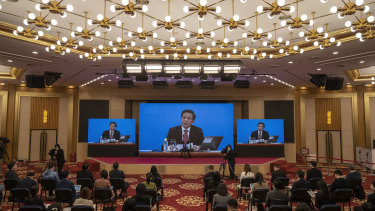 Respondents specifically cited Chinese actions in Hong Kong, where Beijing has been accused of demolishing freedom of speech and opposition politics, and in Xinjiang, where it has imposed a police state and detained more than 1 million members of the Uyghur and other Muslim minority groups.

China’s growing military power, technological prowess and alleged cyberattacks on US targets were also cited as concerns. It said 64 per cent of respondents described economic relations between the countries as “somewhat or very bad.”

Respondents also said they had less confidence in US President Joe Biden’s ability to handle China than on other foreign policy issues such as dealing with terrorist threats, climate change and decisions about the use of force.

While Biden says he wants a more civil relationship with China than under his predecessor, Donald Trump, he has shown no sign of softening tough measures on trade, technology and human rights, along with US support for Taiwan, the self-governing island democracy that China claims as its own territory. 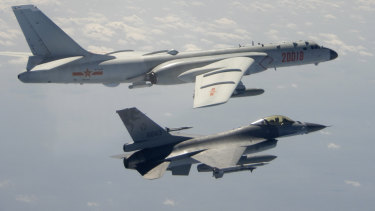 A Taiwanese Air Force F-16 in foreground flies on the flank of a Chinese People’s Liberation Army Air Force H-6 bomber as it passes near Taiwan. Credit:AP

The poll’s findings come amid reports of increases in bigotry and violence aimed at Asian-Americans and Pacific Islanders in the US.

Pew said 89 per cent of Americans “consider China a competitor or enemy, rather than a partner.” A total of 48 per cent responded that limiting China’s power and influence is a top priority, up from just 32 per cent who felt that way in 2018.

Opinions in the Pew survey were drawn from a random online sampling of 2596 US adults conducted from February 1 to February 7. The margin of error was given as 2.7 percentage points. 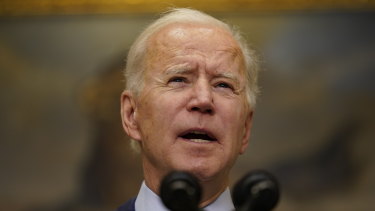 Negative perceptions of China were especially pronounced among respondents who identified as Republicans or Republican-leaning, with 72 per cent saying it was more important to get tougher with Beijing than to build a strong economic relationship, compared to 37 per cent for Democrats.

Many more Republicans also saw China as an enemy and wanted to limit numbers of Chinese studying in the US, although Republicans and Democrats were essentially united in their support for promoting human rights in China and in feeling that China’s human rights policies are a “very serious problem for the US”.

“Only 15 per cent have confidence in Xi to do the right thing regarding world affairs, whereas 82 per cent do not -– including 43 per cent who have no confidence in him at all,” Pew said in a summary of its findings.

Chinese Foreign Ministry spokesperson Wang Wenbin on Wednesday said the Trump administration and “anti-China forces in the US.” had “grossly slandered and discredited China, willfully provoked confrontation and division, spread political viruses, and seriously poisoned the public opinion of both countries.”

“We hope that the US will look at China and China-US relations objectively and rationally, adopt a rational and pragmatic policy towards China, move in the same direction as the Chinese side, do something to enhance mutual trust and cooperation with China, and bring the bilateral relations back to the track of healthy and stable development,” Wang said at a daily briefing.