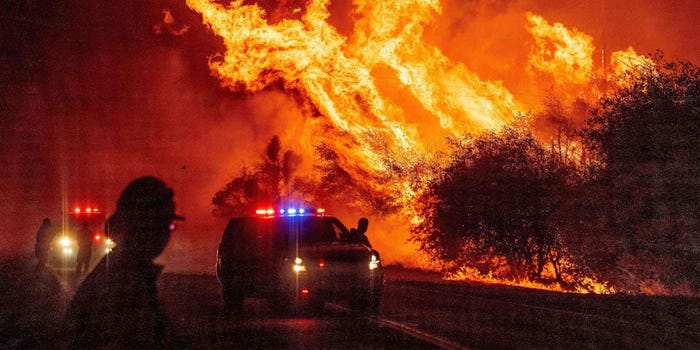 An immigrant from Laos who's been incarcerated since he was 16 helped fight California's wildfires earlier this year, and now he's facing deportation.

Bounchan Keola, 39, was among about 1,800 prison inmates who helped fight the record-setting fires that spread across California earlier this year, the Associated Press reported.

California has relied on incarcerated firefighters to fight wildfires since at least the 1940s, though while working as many as 40 hours a week on the front lines, they earn only about $1 an hour.

But Keola, who was sentenced to 28 years behind bars for a gang-related shooting when he was 16 years old, told reporters in a press phone call that he found a new passion fighting fires.

"For the first time in my life, I felt good about myself," he said, according to KQED. "I told myself this is what I want to do with my life."

He fought six fires in total this season, KQED reported, and experienced a neck injury when he was hit by a falling tree during the Zogg Fire.

He was set to be released from prison in October, but days before his release, agents from Immigration and Customs Enforcement transferred him to an immigration detention facility where agents told him he could be deported.

Keola doesn't have a birth certificate, and while he is a legal US resident who has been in the country since he was two, he can be deported because of his criminal conviction, KCBS-TV reported.

Before he is officially deported, Laos, the country he and his parents fled nearly 40 years ago, has to agree to take him. And in the meantime, Keola is trying all he can to stay in the United States.

"I'm trying to be patient, just hoping that I'll get out of here soon and not face deportation and go back to a country I know nothing of and where my family and I fled for a better life," he told reporters, according to KPIX-TV. "I'm just asking for a second chance to live this American life and to be a firefighter."