We’re going to need a bigger coffee table! It’s 2ft tall, 6st and costs £16,500 a copy – and this lavish art book is almost as much of a masterpiece as the Sistine Chapel it shows in heavenly detail

There are many ways to embrace the glories of the world’s ‘most lavish art book’ — a £16,500, three-tome, life-size reproduction of the famous Sistine Chapel frescos which, despite its price tag, has been flying off the publisher’s reinforced shelves in droves.

Some lucky owners are doubtless transported to the sacred Vatican chapel and its Renaissance masterpiece from the comfort of a lush, plush chaise longue, as their strong-armed butler patiently turns each of its 822 2 ft-high pages.

Others might pop into their private wood-panelled library — fire roaring, 16th-century Italian Baroque music playing, a glass of Barolo by their side — to immerse themselves fully in Michelangelo’s extraordinarily energetic brushwork and vigorous lines.

Nicholas Callaway, chief executive of publisher Callaway, recommends readers ‘perch like a bird on Michelangelo’s shoulder, feel the very act of painting, the gestural quality, the race against time, the speed, energy and intensity’, and tells me that the Queen has already snapped one up for the Royal Collection in Windsor. Not, of course, that she’d be able to lift it. 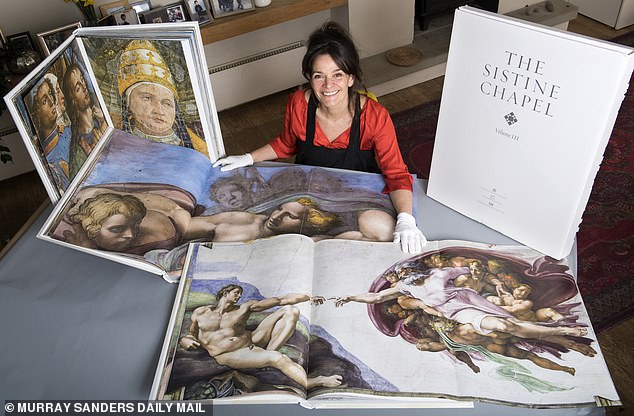 Splendour: Jane pores over The Sistine Chapel’s The Creation Of Adam. For the first time in half a millennium, here is an opportunity to see Michelangelo’s magical ceiling up close

It is ridiculously big, comes in three paving slabs of high culture and is so heavy — each volume weighs more than 2 st — and cumbersome that my review copy, which arrives swathed in layers of bubble wrap, takes two burly removal men to deliver and then nearly crushes my coffee table.

The minute it crosses my threshold it becomes apparent that a messy end-of-terrace cluttered with two small boys, a bouncy dog, three guinea pigs and a pair of poorly trained hamsters, is not where this book should be.

Just keeping it pristine is a challenge — ‘Everybody out! Everybody out. OUT! No drinks, no food. No kids. OUT!’ — let alone finding the peace and quiet to ‘perch like a bird’ on the great man’s artistic shoulder and admire his luminous body forms as my younger son shouts: ‘Look at the butt cracks! Look at the boobies!’

But despite its cost and heft, The Sistine Chapel is causing a stir.

Because, for the first time in half a millennium, here is an opportunity to see Michelangelo’s magical ceiling up close — in a digitally perfect photographic recreation — rather than from 68 ft below as part of the usual tourist crocodile of 25,000 visitors a day.

So instead of being banned by grumpy Vatican staff from stopping in the 15th-century chapel, taking photographs and even talking, in case our collective breath sullies the precious frescos, now we can look and linger.

And there is plenty to see, once you’ve wrestled the books out of their boxes and calico bags.

The first volume covers the masterpieces along the walls, by Ghirlandaio, Botticelli and other Renaissance greats, while parts two and three contain the pictures we all know: 500 square metres of ceiling, more than 300 figures — every panel of Michelangelo’s Sistine works, including his Last Judgment, which he completed in 1541. 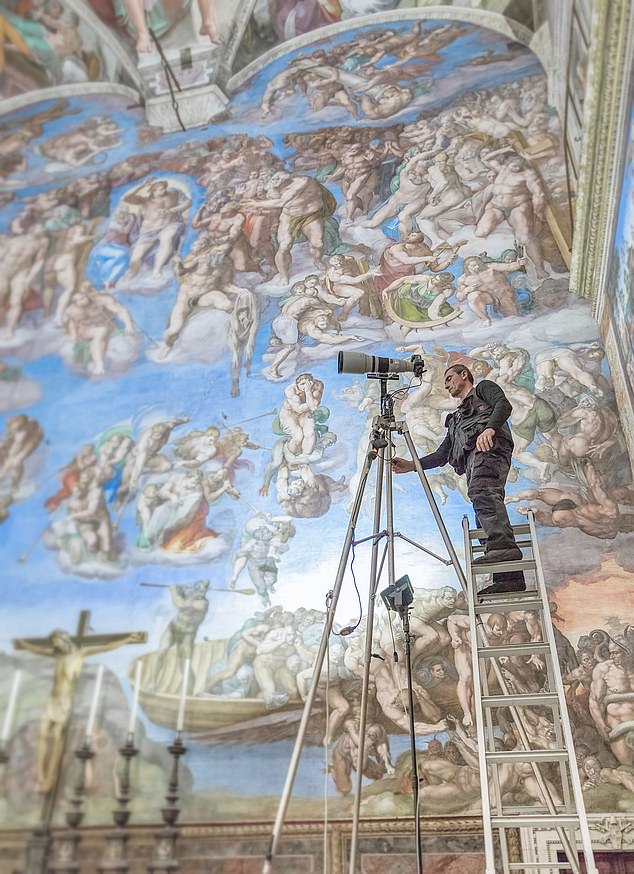 The frescos being photographed for the book. Over 67 consecutive nights (while the chapel was closed to the public) photographers took 270,000 gigapixel digital images from a 33 ft-tall scaffold

Close up, we can study every brush stroke, every shift in colour, admire the beatific expressions, the swirls of beards, hair and cloaks. The whorls of giant ears, the daubs of feet.

Amateur art detectives can also agonise in detail over whether, as legend has it, one of the artist’s secret self-portraits really does appear in the piece of flayed skin held by St Bartholomew in The Last Judgment fresco. And, of course, if God’s cloak in the Creation Of Adam scene does in fact have the same proportions as the human brain.

Commissioned by Pope Julius II, the ceiling took a reluctant Michelangelo four years to complete — allowing for a brief hiatus in the middle while he sorted out a late-payment issue.

Ironically, he didn’t particularly like painting, always considering himself a sculptor by trade. But on he worked, desperate to finish it, until his body sagged and his neck ached from looking upwards for up to 12 hours a day.

‘I’ve already grown a goiter [lump at the front of the neck] from this torture,’ he wrote in a 1509 poem to his friend Giovanni da Pistoia. He painted at speed for as long as the light would last, from a 60 ft scaffold which he built himself.

Meanwhile, this book — made in collaboration with the notoriously uncollaborative Vatican (‘it took a year of diplomatic overtures’) and art publisher Scripta Maneant of Bologna — involved a 200-strong team of photographers, digital experts and Italian bookbinders. 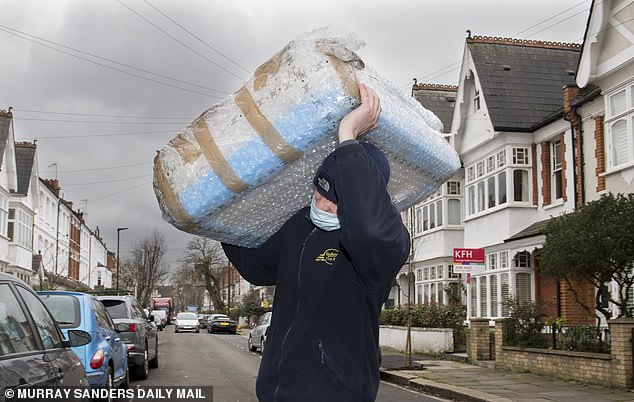 The hefty tomes are delivered to Jane’s house. The first volume covers the masterpieces along the walls, by Ghirlandaio, Botticelli and other Renaissance greats, while parts two and three contain the pictures we all know

The five-year project took longer than the original to complete — and sounds far more fiddly.

Over 67 consecutive nights (while the chapel was closed to the public) photographers took 270,000 gigapixel digital images from a 33 ft-tall scaffold, capturing every inch of the interior.

The photographs were stitched together seamlessly thanks to modern technology. ‘This would not have been possible even five years ago,’ says Callaway.

The images have a 99.4 per cent colour match to the original. This means every eyelash and fingernail is perfectly recreated. And also every male appendage, thanks to a ten-year restoration programme in the 1980s and 1990s, which — along with five centuries of dust, dirt and candle soot — removed the fig leaves and loincloths which had been added for modesty in the 1560s, to save Pope Pius IV’s blushes.

Hang on a minute, though. Would the great Michelangelo — that notorious and rather intense perfectionist who was forever sacking his helpers for not being as talented as he — have approved?

After all, this fresco was designed to be seen from a distance, not from his shoulder.

‘We ask ourselves that!’ says Callaway. ‘Who knows? We think so. It brings his work to the world, so we hope he’d be pleased.’

In fact, when Michelangelo first started in 1508 — with the depiction of The Flood — he painted in great detail, using drawings and plans.

But then he climbed down from the scaffold, gazed up at his work, realised he could see none of the detail and promptly adopted a new approach with a big, broad, sweeping scale which sped things up enormously. After all, no one was ever going to see it close up.

The publishers insist this is no substitute for the real thing, but is designed to complement it. An option for those unable to travel. An inspiration for artists. A nice book to flick through. 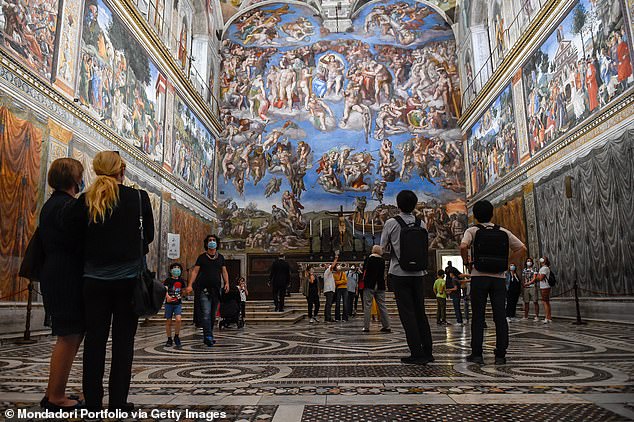 Certainly, once you’ve got a handle on the size, it is a sensory pleasure. The paper is thick and creamy, the spines are white calf leather with silver, gold and platinum foil stamping. The speciality silk binding — done in Novara, Italy — took an extra year alone.

It is a book for the seriously rich. It is not something you can pick up in your local bookshop or order on Amazon Prime. There was a print run of 1,999, with 600 in English and just one UK supplier — Philip Mould. But still they are selling like hot cakes.

So much so, the publishers are now planning an entire series covering the artistic wonders of the world. The Mona Lisa? Rembrandt’s greatest hits? Picasso’s Guernica? They’re not saying yet.

Perhaps more remarkable than the price has been the demand — all around the world — from major art collectors and wealthy individuals. But also, the creators insist, from artists, private and public libraries, museums and surprisingly quite a few groups of women, clubbing together with friends.

Sadly, neither me nor my girlfriends have a spare £16,500. Even if we did, we’d have nowhere to put the volumes. And certainly no bookshelf big enough to house them.

But for now, it is here, in my front room. So, for a minute, I banish from my mind the terrifying potential for spillages and unfortunate incidents involving kids and animals, and immerse myself in the giant, glossy pages — some opening out into even bigger posters.

And here, close up, I can marvel at the scale and beauty of this epic undertaking, study the lavish brush strokes of God’s thick beard, linger over the planes, dips and delves of the naked musculatures — somehow even more manly and exotic against the detritus of domestic life more than 500 years later — and admire the true detail in that famous finger stretch between Adam and God in The Creation Of Adam.

It is without doubt a truly wonderful book and a treat to see Michelangelo’s masterpiece in detail, particularly right now.

But deep down, I know that if I had the cash, I’d be off to Rome in a flash to see the real thing. Even if I did have to squint and jostle and crane along with dozens of others to see Adam’s fantastic thighs.