We have made our live coverage of the coronavirus pandemic free for all readers. Please consider supporting our journalism with a subscription.

The Riverina region in southern New South Wales is on high alert after infectious removalists – the ones who travelled from Sydney to Victoria, sparking an outbreak in north-west Melbourne – told state health authorities they’d stopped off at petrol stations in the regional towns of Jindera and Gundagai.

Anyone who visited the following venues during the relevant times is considered a close contact of a positive coronavirus case and must immediately get tested and isolate for 14 days regardless of the result:

For a full list of the NSW exposure sites that came through late last night, visit the state health department’s website.

A major hospital in the centre of Sydney’s coronavirus outbreak has been forced to postpone all non-urgent surgery after a patient tested positive to COVID-19, sending dozens of staff into strict isolation as the testing system struggled to cope with the widening crisis.

The operating theatres at Liverpool Hospital, the largest in the city’s south-west, have undergone deep cleaning after the patient, who is believed to have been pregnant and having a C-section delivery, returned a positive test on Wednesday. NSW Health said emergency surgery at the hospital is continuing.

The hospital scare came as the NSW government announced a two-week extension of Greater Sydney’s lockdown and as an outbreak in Victoria grew to 11 cases, with thousands who attended an AFL match at the MCG between Carlton and Geelong being directed to test and isolate and the southern state considering reinstating its own coronavirus restrictions.

New details of the trio’s trip emerged on Wednesday – more than 36 hours after Victoria’s public health team began interviewing them – prompting Mr Weimar to express “exceptional frustration” at the men’s lack of transparency. 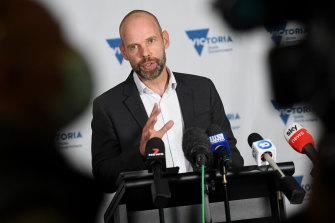 The men arrived in Melbourne on July 8, on a special workers permit for freight drivers to deliver furniture in the City of Hume and pick up another load in the City of Maribyrnong.

Families were at home at both locations and are now isolating. CCTV footage and witness statements revealed the removalists were not wearing masks. The Ariele Apartments in Maribyrnong have been locked down as a result of one of the deliveries. Four people in the building have since tested positive, as well as the elderly parents of one resident.

This morning’s headlines at a glance

Good morning and welcome to another day of our live coverage.

It’s Thursday, July 15. I’m Broede Carmody. Here’s everything you need to know before we get started: