A British Airways passenger has complained about the lack of social distancing on a ‘packed’ flight from Heathrow to Gibraltar with only ‘one or two’ empty seats as photo show people huddling together in the aisle as they disembark.

The Gibraltarian national said he captured the shots to give people an insight into what flying looks like as lockdown restrictions begin to be relaxed across the UK.

The photos, captured on Sunday, appear to show passengers on the flight from Heathrow airport huddled together in the aisle as they disembark the plane.

The man, who has flown several times during lockdown, said it was the busiest flight he had been on since the beginning of the pandemic. 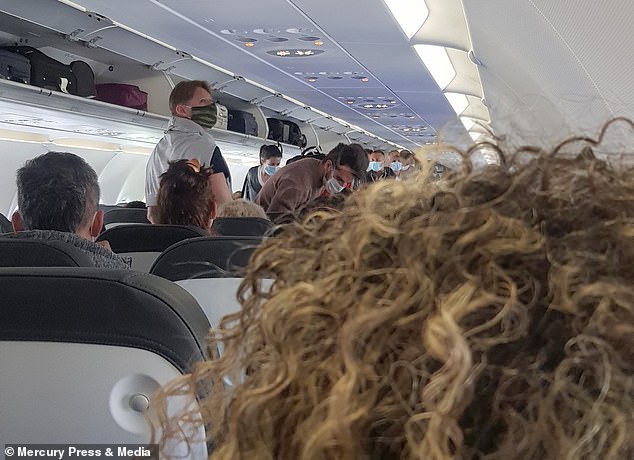 Pictured: Flyers don face masks on the plane as they clump together in the centre aisle on a British Airways flight

Pictured: People crammed into the aisle on the British Airways flight from Heathrow to Gibraltar

He said: ‘The plane was packed. I saw one or two empty seats and they were asking people to put their hand luggage in the holds.

‘All the passengers had masks on though. The girl sat next to me was wearing two masks on top of another and two pairs of gloves.

‘I’ve had a lot of people asking me whether planes are busy or not at the moment and I wanted people to know what to expect.

‘The people on the flight weren’t tourists as they were being stopped from boarding at Heathrow by security.

‘It was a mixture of Gibraltarians and Spanish people. There were no groups of people coming on with their sombreros.’

Another flyer took to social media to say she’d witnessed no social distancing when she took a flight.

Since lockdown began three months ago, there have only been four flights a week between the UK and Gibraltar, down significantly from two to three flights per day prior to the Covid-19 pandemic.

The man who took the photos said he thought the reduced service operating between the UK and the rock might explain why the flight was so busy.

Gibraltar has been in a strict lockdown since mid-March in an attempt to control the virus and travel across the border to Spain has been banned during this time. 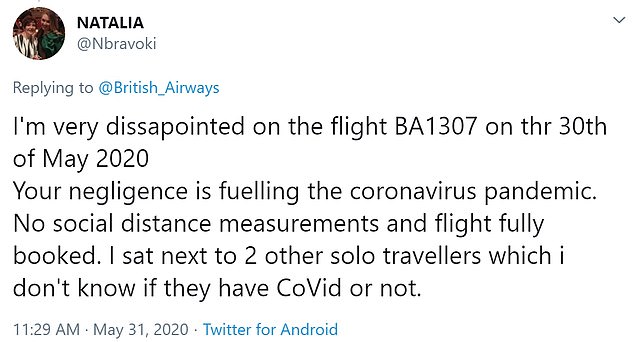 ‘They weren’t serving food or anything and they tended to stay away from each other, rather than huddling at the front like you normally see on flights.

‘It just seems strange as you’re coming off the plane where you’re close to each other into an airport with strict social distancing in place.’

A spokesperson from BA said: ‘We follow all the guidance from the UK Government and global health authorities, including Public Health England and the World Health Organisation.

‘We have taken several steps to greatly reduce contact between customers and crew. 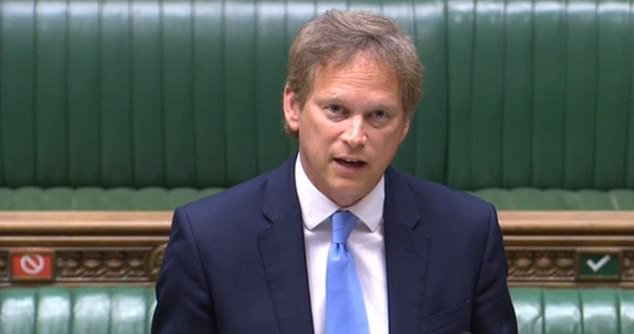 ‘Like other forms of transport, we are keeping vital links open – repatriating customers and ensuring key supplies like medicines and food are flown in. Our teams are doing an amazing job.’

Since June 1 BA has a new policy whereby all customer-facing colleagues must wear masks.

It comes as British Airways has asked all staff to sign new ‘zero hour’ contracts that would allow the airline to lay them off without negotiations, it has been reported.

The beleaguered carrier has already announced plans to send up to 12,000 workers ‘to the dole’ owing to the coronavirus crisis, and warned it may end operations at Gatwick, London City Airport and even Heathrow.

Its Spanish owner, International Airlines Group (IAG), has secured £900million of commercial loans with 70 per cent guaranteed by the Madrid government to prop up Iberia and Vueling during the crisis. 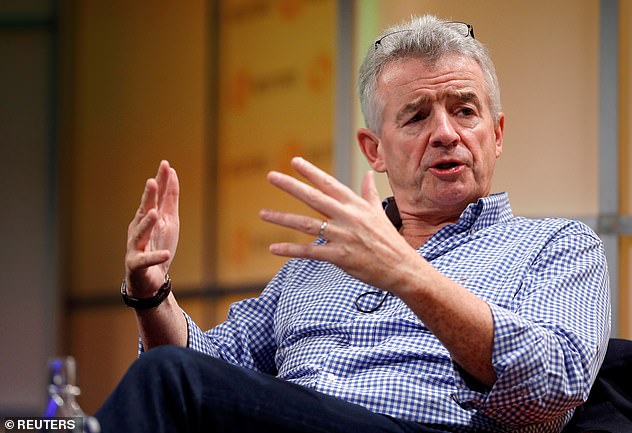 However, it has not taken out loans for BA or sought a bailout from UK authorities. It is thought that this may be in a bid to force other companies out of the UK market.

Unite the Union ordered legal proceedings against the airline yesterday, and demanded that the business supports its UK workers.

Ministers are mulling coronavirus ‘air bridges’ to allow travellers to move between countries without the need for quarantine once the outbreak is under control, it was revealed today.

Transport Secretary Grant Shapps said a ‘blanket’ 14-day quarantine rule for arrivals will be introduced from next month.

But he disclosed that there are ‘active discussions’ going on over what countries could be exempted from the regime in future, referring to the idea of ‘air bridges’ – usually used to refer to military flights over enemy territory.

Countries with lower infection levels, such as Australia, New Zealand and Greece, could potentially be excluded from the tough rules, which will be enforced by law.

Earlier, Ryanair chief Michael O’Leary launched a savage attack on the government’s plans for 14-day quarantine on arrivals to the UK.

The new rules are set dash hopes of summer holidays for most of the summer, as exemptions are largely limited to lorry drivers.

However, Mr O’Leary dismissed claims it will prevent his aim of resuming flights in July, saying he believes the policy is so ‘defective’ and impossible to enforce that the public will merely ignore it.

He insisted the government is ‘making stuff up as they go along’ and face masks are the best way to protect the travelling public – despite many scientists saying they are of limited benefit.