Nearly three dozen suspected Russian mercenaries in “military-style clothing” were detained in Belarus, accused of trying to destabilize the country ahead of its upcoming presidential election.

State media is reporting that the 33 individuals taken into custody work for Wagner, a private military company linked to Yevgeny Prigozhin. Prigozhin is a Russian businessman indicted in the United States for meddling in the 2016 U.S. presidential election. Wagner deployed hundreds of contractors to conflict zones such as eastern Ukraine, Syria and Libya.

“The guests drew attention to themselves because they did not behave like Russian tourists usually do and wore military-style clothing,” the Belta news agency reported Thursday, according to Reuters. 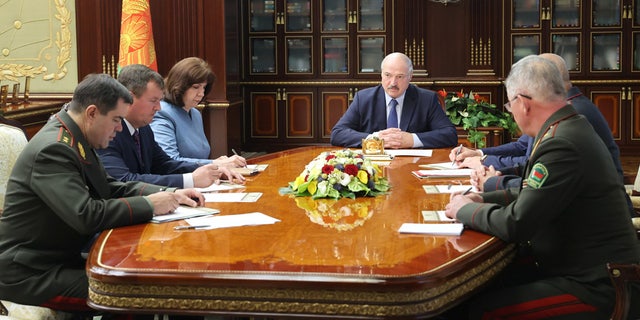 The suspected mercenaries, who officials said are being held on charges of plotting terrorist acts, arrived in the Belarusian capital of Minsk July 24 and were detained Wednesday while scoping out a spa resort.

A senior Belarus security official also said 14 of those detained had spent time in the Donbass region of Ukraine, where Russia-backed fighters have been engaged in a territorial dispute since 2014, Reuters reported.

Images reportedly broadcast on state television showed the group being rounded up in their underwear, and images of one individual’s belongings included a Russian passport and military-style patches.

Belarusian President Alexander Lukashenko is seeking a sixth term in an Aug. 9 election amid opposition protests fueled by public fatigue with his rule and a painful economic fallout from the coronavirus pandemic. He has accused Russian forces of interfering with the upcoming vote, but Moscow has denied any involvement.

With the capture of the suspected mercenaries, Lukashenko has demanded an official explanation.

Kremlin spokesman Dmitry Peskov confirmed on Thursday that 33 Russian citizens were detained in Belarus and said Moscow is hoping to get more information about the incident.

“There is no information about any wrongdoing of the Russians that may have caused the detention. We don't know anything about it,” Peskov said, calling the allegations “nothing but innuendo.”

“Up to 200 militants are on our soil," Ravkov said Thursday. "The search continues. It is like a needle in a haystack.”