Beware the rip-offs so enticing even the editor of Vogue fell for them: UK firms (including one based in a Dartford semi) are seducing shoppers with online ads – then sending them cheap tat made in Chinese sweatshops

Britain is playing a key role in a controversial £65 billion industry that stands accused of fooling the public into buying poor quality, cheap Chinese-made clothes by advertising them on social-media sites as glamorous boutique products.

An investigation by The Mail on Sunday has found dozens of so-called ‘drop shipping’ firms have been registered in the UK by Chinese nationals who arrange for often shoddy goods to be dispatched around the world from factories in their homeland.

Some of the manufacturers are suspected of running sweatshops where staff work long hours for low pay.

Shoppers are attracted by photographs of Western models in apparently high-quality – but cut-price – clothing.

When the product arrives, usually after many weeks or even months, many customers discover that it barely resembles what they have ordered and is made of inferior materials. 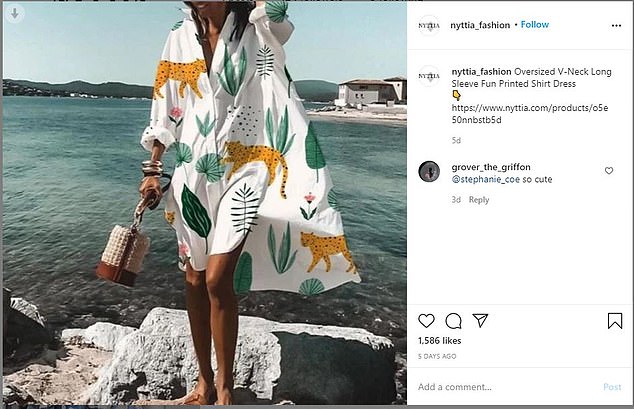 Review websites such as Trustpilot are packed with critical comments, many detailing how efforts to return the products and obtain a refund have been slow or fruitless.

Mail on Sunday columnist Alexandra Shulman, a former editor of Vogue magazine, is among those left disappointed.

She spent £27 on a dress advertised on a website called onceangel.com which ‘looked really nice’. However, when it arrived, it turned out to be ‘an item of unrecognisable hideousness’.

OnceAngel is owned by a firm called Bumperr Ltd – its directors include Chinese national Lingling Wu and Briton Amy Greenhalgh. Ninety-seven per cent of its ratings on Trustpilot are either ‘poor’ or ‘bad’.

The company, which is based at a business park in High Wycombe, Buckinghamshire, did not respond to requests for comment.

Two other companies, Xehia Trading Ltd and Yingchuang International Electronic Commerce Ltd, which are behind more than 300 drop shipping websites, are linked to a semi-detached residential property on a housing estate in Dartford, Kent. 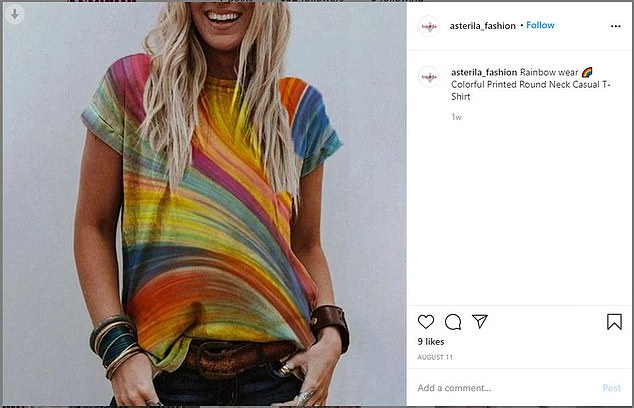 Jit Bahadur Ghale, who lives at the property, said: ‘I have been doing work through an accountancy firm for clients. Mr [Arvind] Kohli, my boss, is the one who deals with everything. I work for him, that’s all. This was the registered address but I complained to my boss and he changed the registered address last week. He’s communicating with his clients in China or Hong Kong.’

Mr Kohli runs an accountancy firm called ASVSH and is listed as a previous director of both Xehia and Yingchuang International Electronic Commerce.

He said: ‘I am upset and saddened by this event and I am also sorry that my involvement in this matter has led to people receiving substandard goods.

‘My company was approached by a man from China who wanted to set up a company for his business. At no time was I given any indication that they intended to sell clothing from these websites.

‘The reason I was given for forming the companies was that they eventually wanted to provide financial services to companies in the UK. I have contacted Xehia Trading Ltd and asked them to stop using the Dartford address and have terminated my dealings with them.’

Rexitt, one of Xehia’s stable of websites, boasts of being ‘devoted to creating an unbiased platform for small brands and yet-to-be-famous designers who are seeking bigger audiences for their designs’.

It offers to ‘sell products directly made by our own factories with high quality but lower price’. It too has drawn criticism from its customers.

Buyer Jane Murray wrote on Trustpilot: ‘Do not go near this bogus company. All items made of cheap polyester, cheaply finished and in no way of the quality you assume.’ 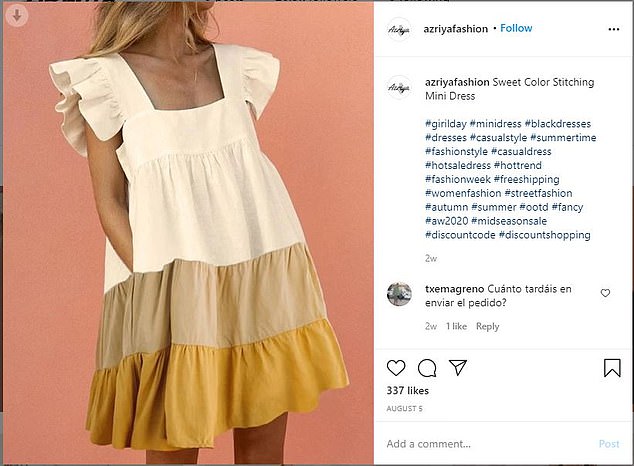 Professor Liz Barnes, of the Manchester Fashion Institute said: ‘These schemes are accelerating the downfall of the high street’

Another buyer wrote: ‘I ordered two dresses from a Facebook ad. The dresses were cheaply made and they are not true to size. The dresses do not fit.’

The frustration of many is compounded by difficulties returning the products and getting a refund. Some requests go unanswered, while other people are fobbed off.

In one case, a customer was advised to give their goods to a family member instead of paying to return them to China.

Experts say unscrupulous firms are cashing in on the growing popularity of drop shipping and risk damaging the reputation of the whole industry.

James Brown, managing partner at strategy consultants Simon, Kucher & Partners, said: ‘Legitimate retailers have a reputation to uphold and generally strive to treat customers well and provide a good product, but the ease with which anyone can get into drop shipping means that companies will try to make as much money as possible as quickly as possible before walking away when negative reviews pour in. Many will simply fold the company, start another one and do the same thing again.’ 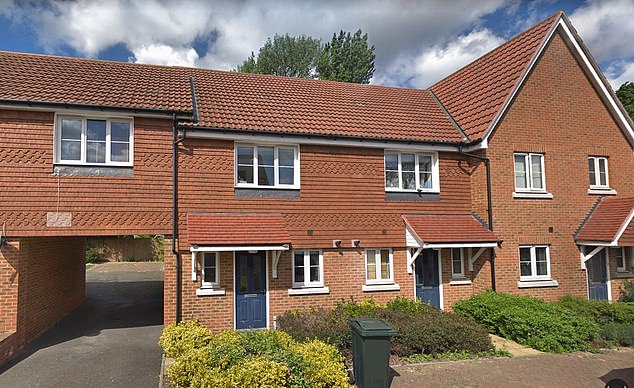 The housing estate in Dartford, Kent where two such Chinese firms are registered

E-commerce expert Ian Rhodes said: ‘This is the pyramid scheme of modern day e-commerce. Most who get involved see it as a get-rich-quick scheme. Invariably, consumers lose out.’

And Professor Liz Barnes, of the Manchester Fashion Institute, added: ‘One of the real tragedies of these kinds of schemes is they are accelerating the downfall of the high street because people increasingly think they can buy cheap clothes online.

‘I have been a victim of these kinds of ads. In the back of my mind I knew I wouldn’t get what was advertised at the price it was, but I still fell for it.’

While there is no evidence that Bumperr, Xehia Trading or Yingchuang International Electronic Commerce work with Chinese sweatshops, a House of Commons report last year concluded that ‘prison labour in China has been used to produce garments for well-known Western brands’.

Sylvia Rook, lead officer at the Chartered Institute of Trading Standards, advised those unhappy with their goods to pursue a refund through the company or contact their bank.

‘If the price of a single item was over £100 and you paid by credit card, the card provider is equally liable under Section 75 Consumer Credit Act for faulty or misdescribed goods or goods not received and will have to provide you with the refund,’ she said.

‘If the item was less than £100, you can still make a claim through a process known as chargeback, where the bank will attempt to reclaim the money for you.’

Drop shipping firms advertise products that they neither stock nor dispatch – they are middlemen, finding cheap goods on Chinese websites and then marketing them on sites such as Instagram.

A £10 advert can reach up to 150,000 potential customers. When orders come in, they pass them to their Chinese suppliers, who send out the items. The difference between the sale price – minus the cost of advertising – and the factory price is clear profit.

Most drop shippers use e-commerce platform Shopify to build online stores and an app called Oberlo to connect to suppliers. The industry is booming, with Chinese-made products estimated to account for 40 per cent of all e-commerce sales.

ALEXANDRA SHULMAN: So chic on Instagram, so hideous in real life

The dress looked really nice on my Instagram feed, sandwiched between a post from World of Interiors and a picture of a friend poolside in Greece.

It was from a company called OnceAngel and showed a slender, tanned blonde girl in a midi dress described as a ‘colorblock cotton and linen long loose dress’.

The bodice appeared to be stitched in a heavy red and white threaded oriental pattern.

I showed it to a friend sitting beside me and we agreed it would be just the thing to take on holiday to Croatia in a few weeks (now looking like another fantasy).

The clue should have been in the price of £27 – flagged as being 41 per cent off.

Of course, I should have had more sense. Me, editor of Vogue for 25 years and a journalist for far longer, should have realised that you get what you pay for. Which in this case was an item of unrecognisable hideousness. 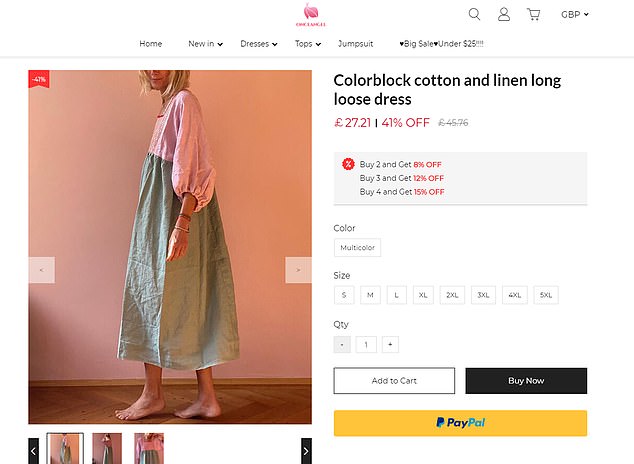 Far from the moss linen skirt and pink cotton sleeves advertised, a package arrived with a crumpled-up dress made of an indescribable artificial fabric the colour of hospital linoleum with a sickly peach-coloured sleeve.

The bodice was in the same fabric with a flat ugly print. However cheap it might have been, it couldn’t match how cheap it looked.

Hoping against hope that it might look better on, I slipped into it but if anything it looked even worse. The fabric was sticky against my skin, the skirt hanging in limp creases and the sleeves droopy batwings with elasticated wrists.

I felt immensely foolish. How could I, who knows all the tricks of the trade, have fallen for a simple Instagram photo with a stylish gloss?

Worse, I was no doubt boosting the coffers of a company employing the kind of workshop practices that fast fashion companies have been pilloried for, playing my part in encouraging appalling sweatshop conditions that we don’t have to look to China and the Far East to discover.

They’re here at home, in some of our cities hit hard by Covid-19. 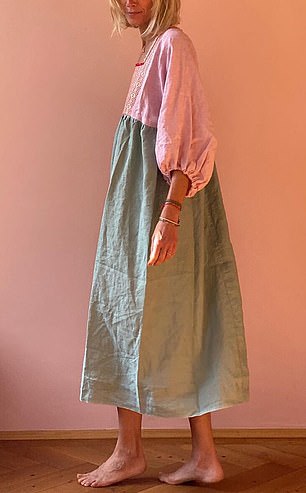 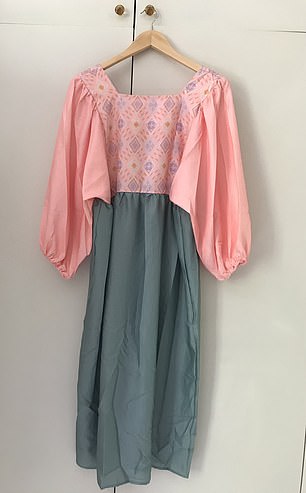 The returns address supplied with the dress was Walsall in the West Midlands, but on the OnceAngel website, the detailed returns policy which gave the firm a veneer of respectability, stated people should email before sending anything back.

I duly did so, saying the dress was in defiance of the Trade Descriptions Act and I was returning it pronto. Immediately an email pinged back with a Chinese character in the subject box instructing me to return it to:

This story doesn’t reflect well on anyone, but particularly me. I should have known that the embroidered linen dress I imagined I was buying would cost more than the price asked.

If I’d bothered to look at the website, I would have had second thoughts when I saw the three-pack of pastel ‘fashion lace socks’, bizarrely photographed next to a small soft-toy rabbit, featured on the ‘new in’ section. Not exactly chic.

And I would hopefully have spotted that a jump suit I had also been tempted by from an Instagram ad from a differently named seller was also on there for a ludicrously low price.

If someone like me can fall for such brazen rip-offs – even knowing the importance of issues around ethical workplaces and the need for environmental and sustainability checks in the fashion industry – it just shows that cleaning up the business has a long way to go. And that even old pros like me can fall victim to the sugar rush of a cheap online hit.