One of the UK’s largest coronavirus drive-in centres stands empty today and bored workers have even had time to create an equine mascot decked out in PPE as Matt Hancock was accused of ‘misleading’ the country with ‘incomplete’ testing figures.

NHS staff working at Twickenham rugby stadium in West London have clearly had little to do as they wait for patients to arrive as daily data showing the exact number of people swabbed in England has now been ‘unavailable’ for ten consecutive days.

Bored contractors put a blue surgical face mask and white gloves on a life size head of a horse at the entrance to the test centre in the car park.

Health Secretary Mr Hancock was urging people to get tested yesterday – but they are unlikely to be using drive-in centres because they have been self-isolating – and today he was taken to task over ‘misleading’ coronavirus test figures by the UK’s top statistician, who accused him of spinning the numbers to make them look better.

A yellow high viz jacket – the same as worn by staff checking in those needing a swab test – completed the look. Despite the drive through centre opening its doors at 8am only a small trickle of cars arrived for their pre-booked test by medical staff who take a throat and nasal swab.

Staff then sat around in the blazing sunshine chatting and waiting for cars to negotiate the contra flow system erected in the car park in the shadow of the home of English rugby. 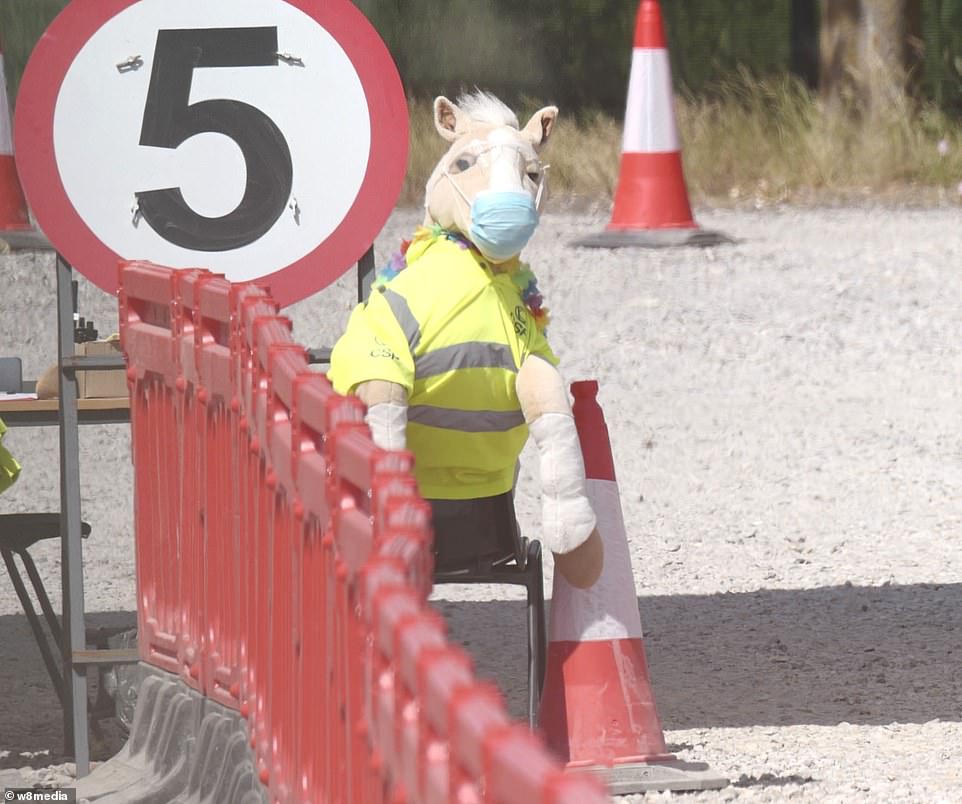 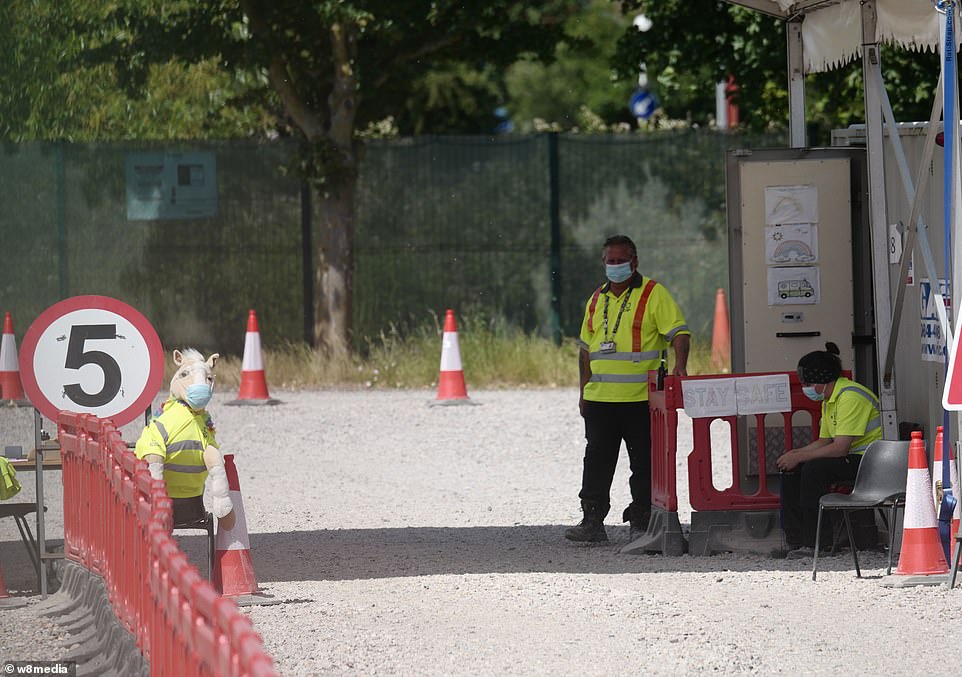 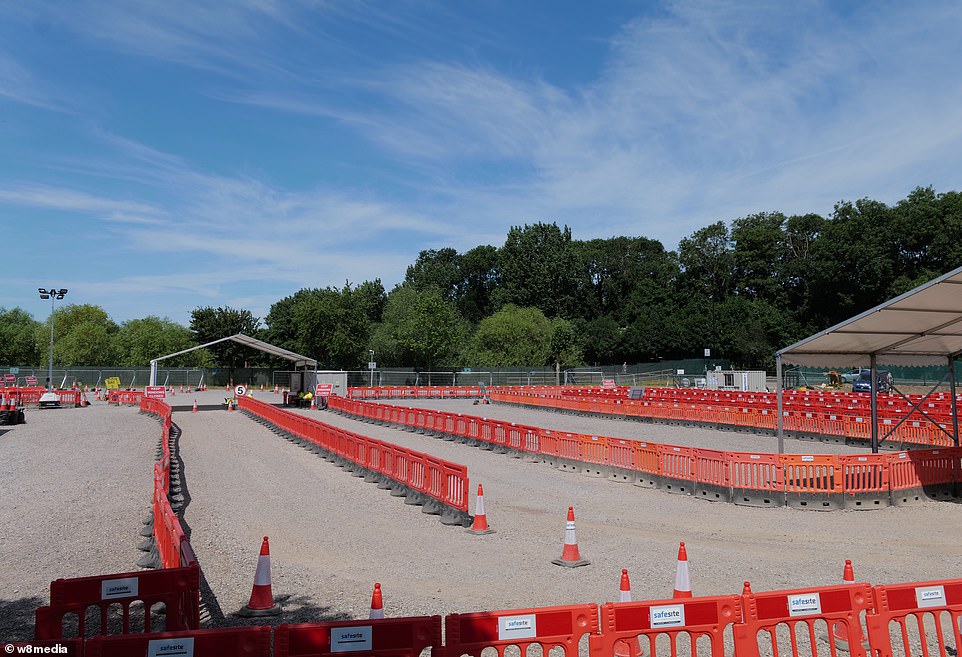 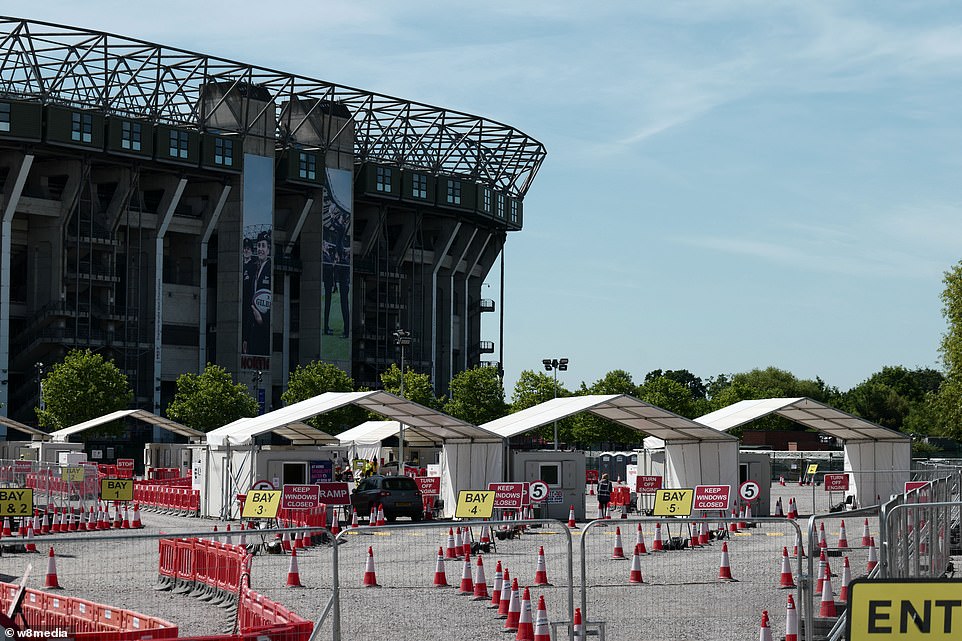 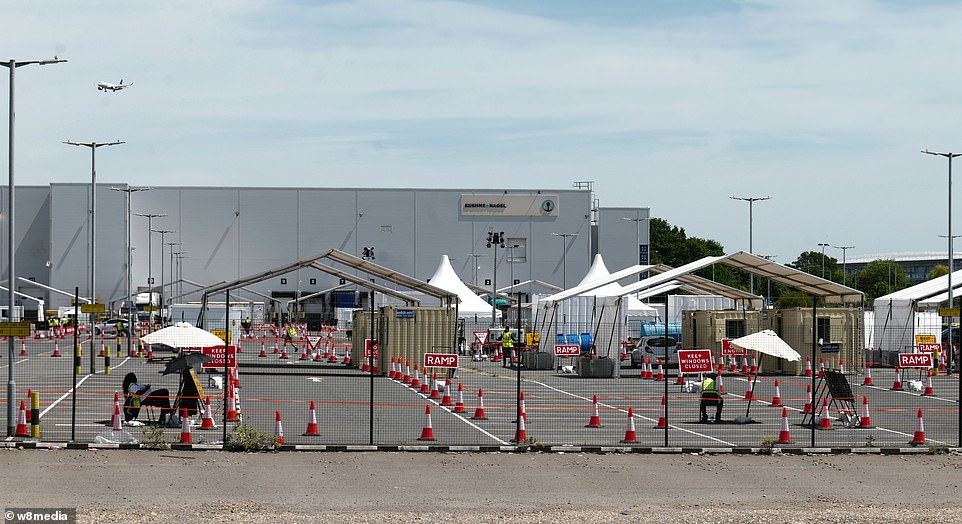 A member of staff with the words ‘traffic management’ walked around the red plastic barriers that had been set up to keep the expected large number of cars in line.

Staff at the test centre said they had seen less than 100 people a day in the last week although they have the capacity to handle up to 500.

The stadium is in the borough of Richmond upon Thames which has one of the lowest incidents of infection out of all the London boroughs.

The lack of people requiring testing backs up figures that show the transmission rate in London has significantly reduced since the peak a month ago.

Anyone over the age of five who has shown the main symptoms of coronavirus, such as a persistent cough or fever, can book a test online through the Government website.

They are given a choice of test centres closest to their postcode with 59 drive thru centre set up across the country.

Army personnel have been involved in helping medical staff carry out the swab tests at some of the centres.

Those undergoing the test are told the results will be emailed out to them within 72 hours. Those who test positive will be contacted by the army of tracers set up to try and prevent further spread of the virus.

Anyone who tests positive will be required to self isolate for 14 days and those who have come into contact with that person telephoned by one of the army of 25,000 people hired to track and trace and informed they too must stay home. 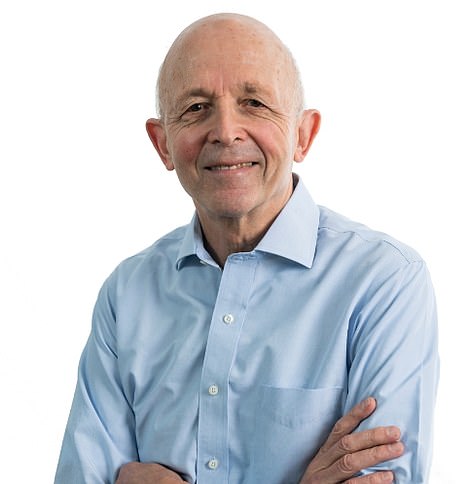 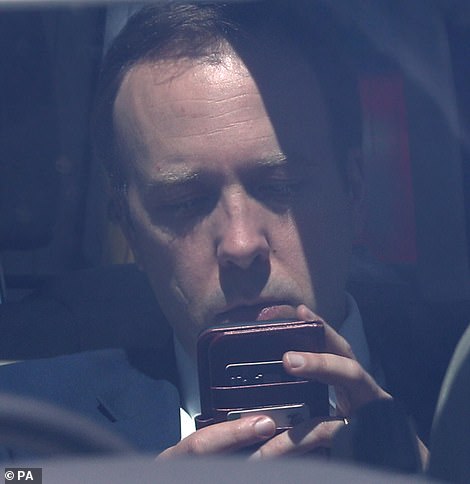 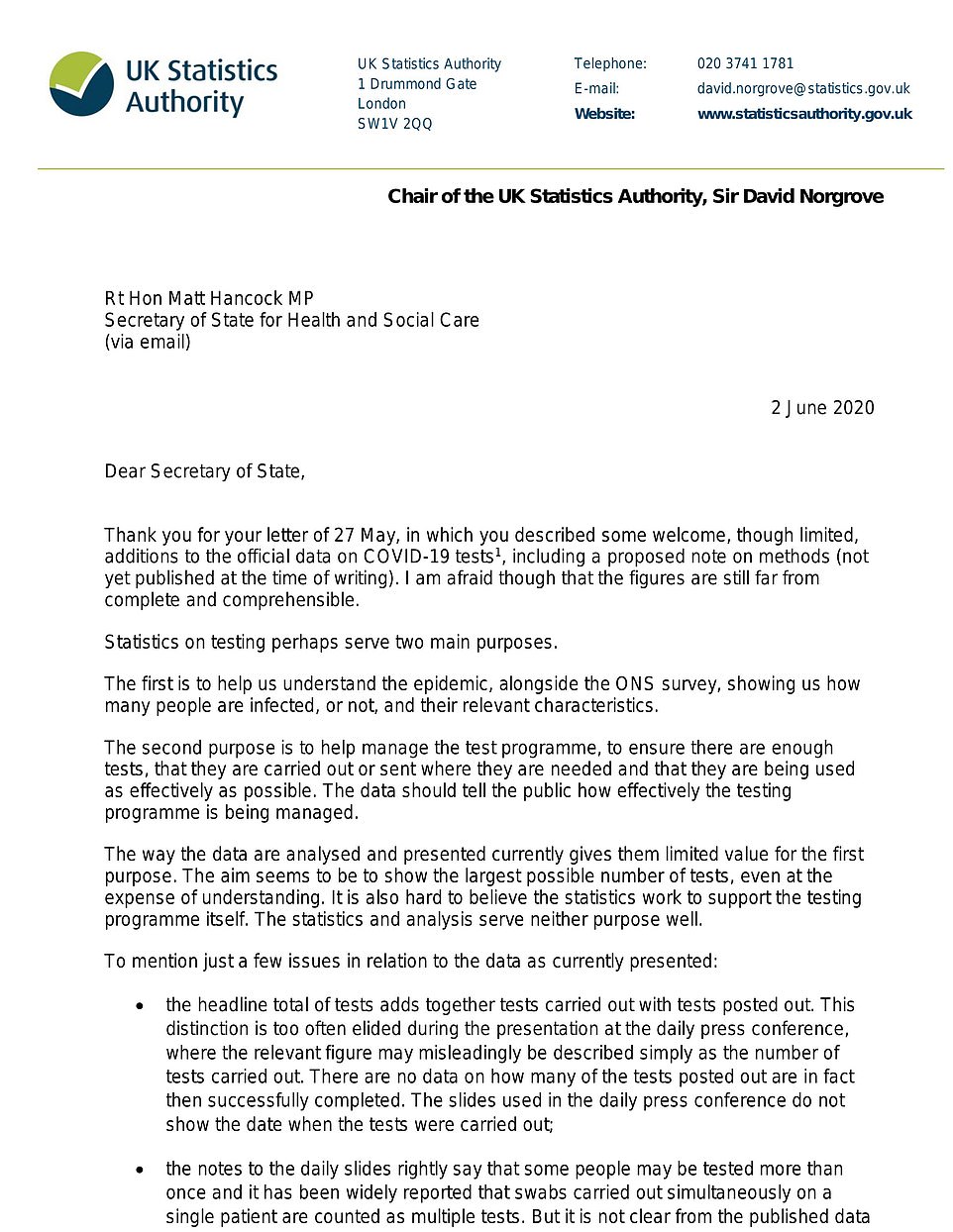 In his second critical letter to Mr Hancock in the space of a month, Sir David took aim at his use of data to claim more than 100,000 per day were being tested for coronavirus 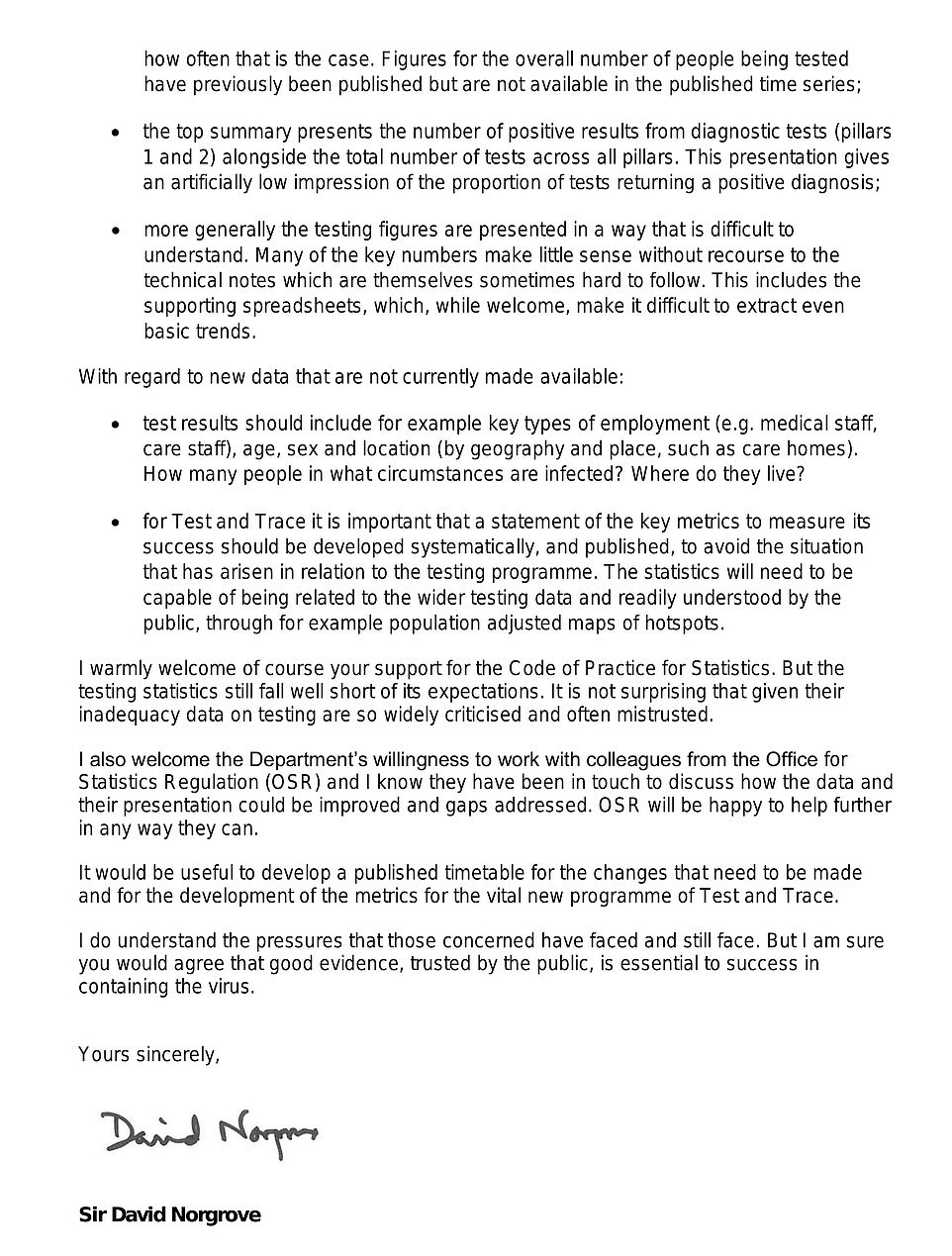 In his second critical letter to Mr Hancock in the space of a month, Sir David took aim at his use of data to claim more than 100,000 per day were being tested for coronavirus

It came as Health Secretary Matt Hancock was taken to task over ‘misleading’ coronavirus test figures today by the UK’s top statistician, who accused him of spinning the numbers to make them look better.

In a withering rebuke for the Health Secretary, Sir David Norgrove  told him the data presented to the public was ‘still far from complete and comprehensible’.

In his second critical letter to Mr Hancock in the space of a month, Sir David, a former Treasury economist and private secretary to Margaret Thatcher, took aim at his use of data to claim more than 100,000 per day were being tested for coronavirus.

He lashed out at the way ministers have presented tests that had been analysed and those simply sent out by post to potential sufferers as ‘completed’.

He warned that the way the statistics were used fell ‘well short’ of professional standards, adding: ‘It is not surprising that given their inadequacy data on testing are so widely criticised and often mistrusted.’

He said there were two main purposes for the testing statistics – to help understand the epidemic and to support the management of the testing programme.

‘The way the data are analysed and presented currently gives them limited value for the first purpose,’ he wrote.

‘The aim seems to be to show the largest possible number of tests, even at the expense of understanding.’

It came as ministers faced pressure over the stuttering test and trace system, which staff say has been beset by problems that have left staff with nothing to do.

Ministers insist it is working and Mr Hancock last night said it had more capacity than it needed.

Sir David first wrote to Mr Hancock last month, warning him to improve the ‘trustworthiness’ of his daily updates and the clarity of his 100,000-tests-per-day target set for the end of April, which was met by adding posted test kits to the total of completed tests.

In his letter today, Sir David again attacked the collation of ‘headline tests’, writing: ‘This distinction is too often elided during the presentation at the daily press conference, where the relevant figure may misleadingly be described simply as the number of tests carried out.

‘There are no data on how many of the tests posted out are in fact then successfully completed. The slides used in the daily press conference do not show the date when the tests were carried out.’

He added: ‘More generally the testing figures are presented in a way that is difficult to understand. Many of the key numbers make little sense without recourse to the technical notes which are themselves sometimes hard to follow.

‘This includes the supporting spreadsheets, which, while welcome, make it difficult to extract even basic trends.’

It came as the number of excess deaths in the UK since the coronavirus outbreak began reached almost 62,000.

Tuesday’s figures from the Office for National Statistics, showing 56,308 excess deaths in England and Wales between March 21 and May 22 2020, follow figures last week showing the equivalent numbers for Scotland and Northern Ireland.

Together, this means the total number of excess deaths in the UK as recorded by death registrations across this period now stands at 61,795.