Is that really your local area, Boris? Prime Minister faces questions over his OWN lockdown rules after being spotted cycling SEVEN MILES from Downing Street in the Olympic Park

Boris Johnson faced questions today after it emerged he went cycling in the Olympic Park over the weekend.

The PM was spotted wearing a hat and a face mask at the park seven miles away from Downing Street yesterday afternoon.

A source told the Evening Standard that Mr Johnson was exercising, accompanied by his security detail.

However, official Government guidance says exercise should be limited to once a day and ‘you should not travel outside your local area’. 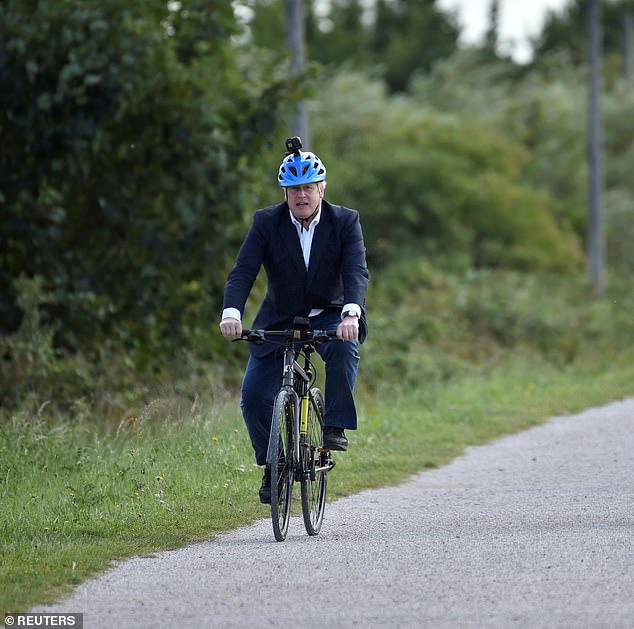 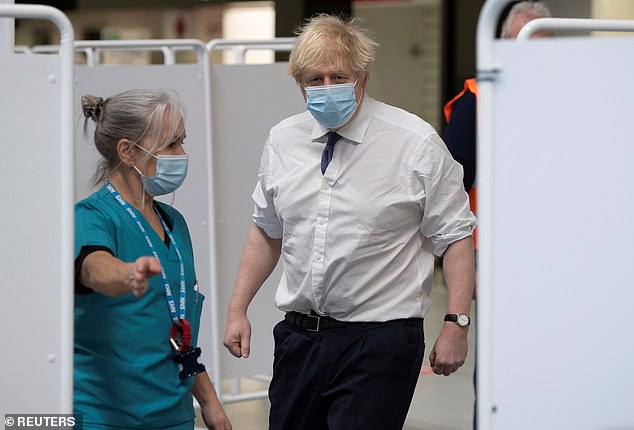 On a visit to the Ashton Gate vaccination centre in Bristol today, the PM revealed that 2.4million jabs have now been administered as the operation is ramped up 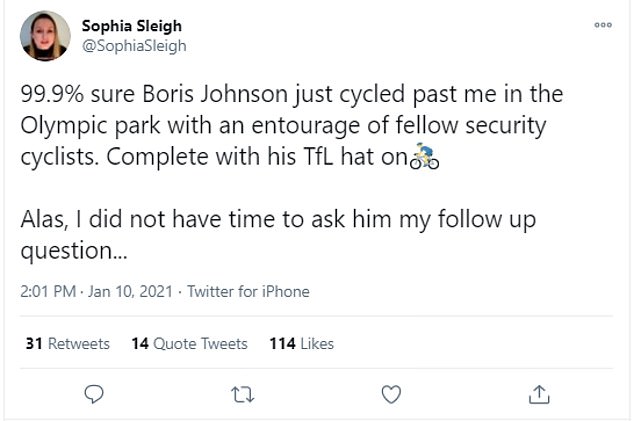 A source told the Standard the PM was exercising, adding: ‘But he did note how busy the park was and he commented on it at the meeting last night.

The PM’s spokesman was unable to give any information today on why Mr Johnson had gone to Stratford and why it was within the rules.

Mr Johnson today warned he is ready to tighten lockdown further as he voiced fears that vaccines have made people ‘complacent’ about obeying rules despite the NHS being on the brink of disaster.

On a visit to the Ashton Gate vaccination centre in Bristol today, the PM revealed that 2.4million jabs have now been administered as the operation is ramped up.

But amid rebukes to people stopping to chat with friends and sitting on park benches, he echoed a dire message from Chris Whitty that the next few weeks are set to be the worst yet for the NHS.

‘This is a very perilous moment because everybody can sense that the vaccine is coming in and they can see that the UK is vaccinating large numbers of those that need it most,’ Mr Johnson said.

‘My worry is, and Chris’s worry is, that this is the moment when that degree of false confidence, false complacency, and that when you look at what has happened in the NHS that complacency is not merited.

‘More important than us just pushing out new rules, people have got to follow the guidance.

‘In supermarkets, people need to be keeping their distances, making sure that they’re wearing masks, doing the right thing.

‘We need to enforce the rules in supermarkets. When people are getting takeaway drinks, in cafes, then they need to avoid spreading the disease there, avoid mingling too much.’

A Whitehall source told MailOnline ministers have discussed going as far as saying people can only leave the house once a week – although No10 today denied this was on the cards saying the focus was on ‘bolstering enforcement and policing’. Other ideas include compulsory mask-wearing outdoors and a ban on extended bubbles. 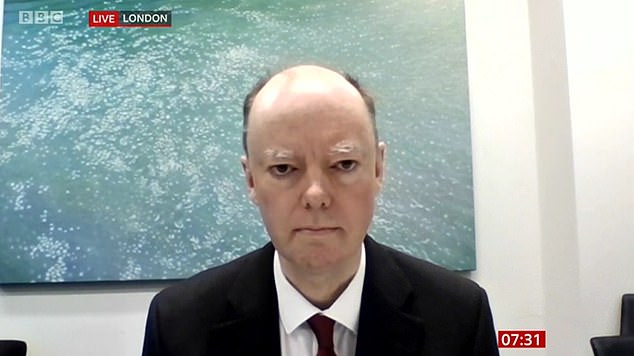 Chief medical officer Chris Whitty took to the airwaves today to highlight the scale of the threat, saying that there are 30,000 people in hospital compared to the peak of 18,000 in April

Vaccines minister Nadhim Zahawi this morning suggested that shops are in the firing line, stressing the need for everyone to wear masks and follow one-way systems in supermarkets. He appealed for people not to stop and chat to friends they bump into while outside their homes – and also made clear that sitting on park benches during ‘exercise’ sessions was not recommended.

Meanwhile, Downing Street was unable to say whether people are allowed to get a takeaway coffee and drink it while walking with someone from another household.

Limits on individuals from different ‘bubbles’ exercising together also look to be in the pipeline as the government scrambles for ways of lowering transmission.

And in a piece of detailed tightening, the government has change the definition of ‘close contact’ so it applies when people have been in proximity for more than 15 minutes over a whole day. Previously the rule was 15 minutes of close contact in one go.

Chief medical officer Prof Whitty took to the airwaves to highlight the scale of the threat, saying that there are 30,000 people in hospital compared to the peak of 18,000 in April.

He urged people to remember that ‘every unnecessary contact’ was an opportunity for the virus to spread.

He insisted that although the NHS was in the ‘most dangerous situation anyone can remember’ vaccines mean the UK can be back to normal in ‘months not years’ – but he cautioned that the situation is a long way from that currently.