Brazil has suffered its bleakest day of the coronavirus crisis so far with a record 1,179 new deaths and 17,408 new cases in a day, cementing the country’s place as a new epicentre of Covid-19.

The alarming surge brings Brazil’s death toll from 16,792 to 17,971 – with experts warning that the worst is yet to come.

The total number of infections rose from 254,220 to 271,628, the third-highest total in the world after the United States and Russia.

Public health experts say the peak is not expected until June and fear that the true scale of the crisis is far greater because of insufficient testing.

Brazil’s far-right president Jair Bolsonaro remains bitterly opposed to the lockdowns which most states have imposed, raging at the economic damage over what he calls a ‘little flu’. 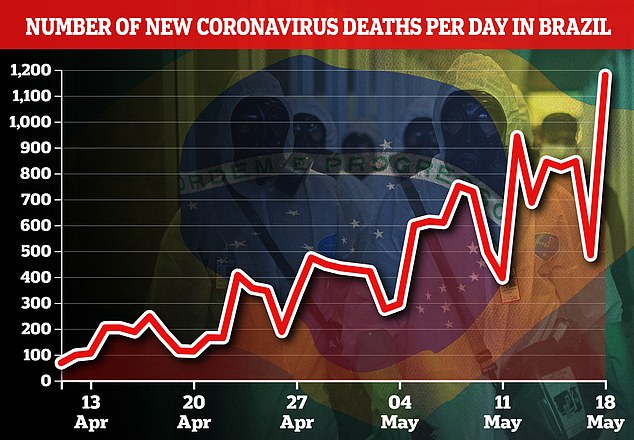 Brazil’s daily death toll from coronavirus, shown on this graph, reached a record high of 1,179 yesterday – the first time that more than 1,000 deaths have been added in a day 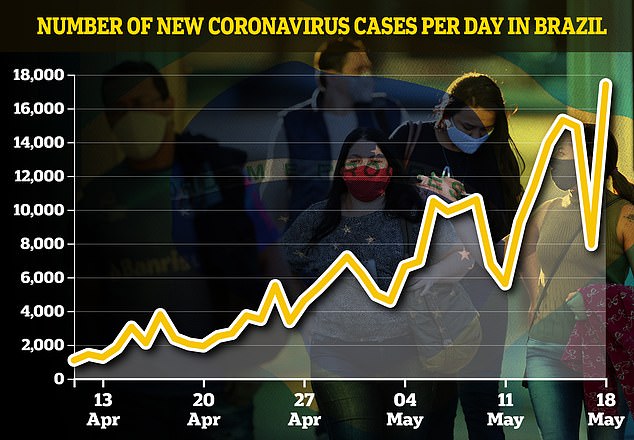 Brazil’s number of cases rose by 17,408, also a record high for the country – which now has the third-highest infection count in the world

Brazil’s health ministry said 146,863 people were currently having treatment for Covid-19, while 106,794 people have recovered from the disease.

The latest death toll is the first time that more than 1,000 deaths have been added in a day.

The ministry said many of the 1,179 new deaths did not occur yesterday and were only being registered now because of delays in confirming the cause of death.

The state of Sao Paulo accounts for 65,995 of the total cases while the Rio de Janeiro region has suffered 27,805, according to official figures.

Hospitals are already close to the breaking point in some areas, including Sao Paulo, Rio de Janeiro and the northwestern state of Amazonas.

About 13 million Brazilians live in shanty town ‘favelas,’ where hygiene recommendations and physical distancing are near impossible to follow.

Bolsonaro has been a bitter opponent of lockdown measures, but most of the country’s 27 state governors have ignored him and imposed their own.

Earlier this month the government of Sao Paulo extended mandatory quarantine orders through to May 31, after they were originally due to expire on May 11.

Bolsonaro argues that the toll on the economy is becoming unbearable and businesses must be allowed to reopen as soon as possible.

The government now expects Brazil will post its biggest annual economic contraction this year since records began over a century ago. 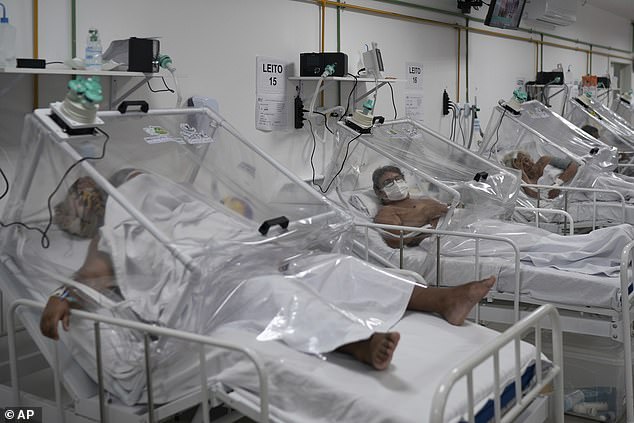 Coronavirus patients lie inside capsules in a hospital in Manaus on Monday, in Brazil which has now suffered nearly 18,000 deaths from Covid-19 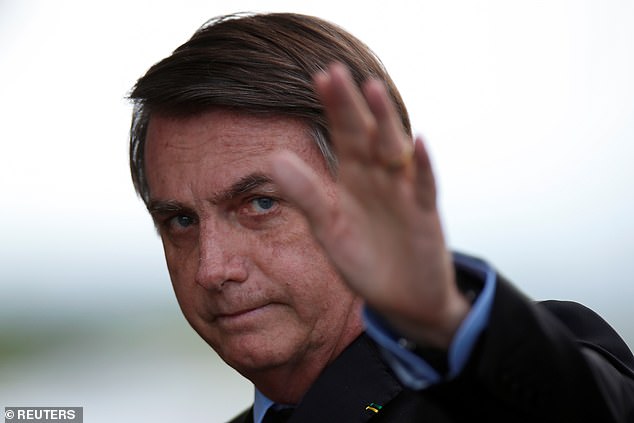 Like his ally Donald Trump, Bolsonaro has also touted the anti-malaria drug hydroxychloroquine as a treatment for coronavirus, even though doctors are doubtful about its effectiveness and warn of possible health risks from taking it.

The president has lost two health ministers during the crisis, one of whom resigned after clashing with Bolsonaro over the use of chloroquine.

Bolsonaro said interim minister Eduardo Pazuello would issue new guidelines on Wednesday expanding the use of the drug.

The president told Brazilian media that Pazuello, an active-duty army general, would sign the new chloroquine guidelines and keep the top job for now.

Bolsonaro has also flouted social distancing rules himself by speaking to supporters at outdoor rallies and saying he would invite 30 friends for a barbecue.

Latin America and the world’s poorer regions have so far suffered less from the pandemic than the rich world, but there are fears that the worst is yet to come.

Argentina has also seen a spike of infections in its second city of Cordoba, forcing officials to roll back plans to ease the lockdown.

Pan American Health Organization officials say they are  concerned about the virus’ spread in the tri-border area of the Amazon between Colombia, Peru and Brazil.

They urged special measures to protect vulnerable populations among the indigenous, poor and racial minorities.

World Bank chief David Malpass said yesterday that up to 60million people could be ‘pushed into extreme poverty’ as the virus hits developing countries.