A British diplomatic vehicle was hit by a roadside bomb near Baghdad airport on Tuesday morning, the UK’s Iraqi embassy has said.

The blast occurred at the entrance to the city’s Green Zone, according to local reports, but did not cause any casualties.

No group has claimed responsibility for the attack, though the US frequently blames such blasts on Iranian-backed militias in the country. 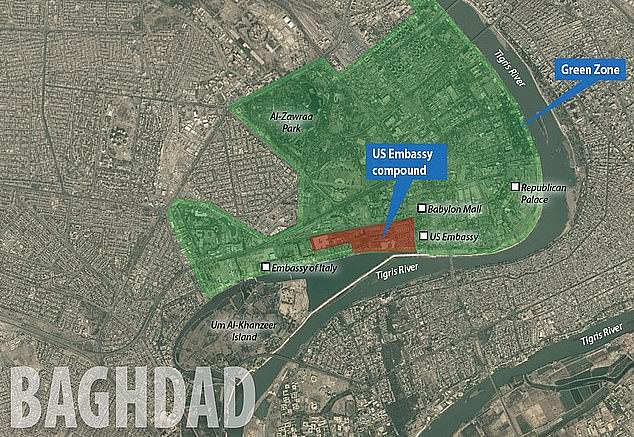 A car carrying British diplomats in Baghdad was targeted by an IED as it entered the city’s Green Zone on Tuesday, though escaped without injury

The bomb blast came hours after two rockets were fired into the Green Zone, which houses government buildings and foreign missions.

It is unclear what the intended target was, but neither missile caused any casualties, the country’s military said.

Iraq, often the scene of spillover violence from U.S.-Iran tensions, has sought to avoid being drawn into any regional conflagration.

Iran-aligned militias have sworn to avenge their deaths.