London: Britain's Boris Johnson will ban the sale of petrol and diesel cars by 2030, pledging to be the first G7 country to switch to electric vehicles and fully decarbonise road transport.

The measure is one of several outlined by the prime minister as part of his plan for a Green Industrial Revolution to stimulate Britain's pandemic-battered economy. 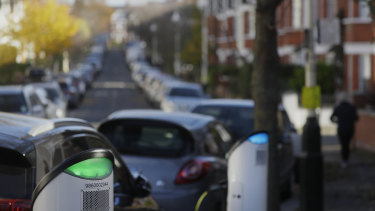 Build back greener: an electric car charges on a street charging port in London.Credit:AP

"Although this year has taken a very different path to the one we expected, the UK is looking to the future and seizing the opportunity to build back greener," Johnson said.

"The recovery of our planet and of our economies can and must go hand-in-hand.

"This is a shared global challenge – every country in the world needs to take action to secure the future of the planet for our children, grandchildren and generations to come," Johnson said.

The British government has committed to net-zero carbon emissions by 2050 – the goal includes huge boosts to renewable energy sources including wind power as well as new nuclear plants which are to be partly financed by China.

Former prime minister Malcolm Turnbull who clashed with his party on how to mitigate Australia's carbon emissions said Johnson's commitments served as yet another reminder to the Liberal and National parties "that conservatism does not require climate denialism or a fear of innovation and technology."

Johnson wrote in London's Financial Times that he would establish a net-zero task force which would urge countries and companies to join the net-zero goal. But Australia is refusing to sign on to the net-zero climate commitment ahead of the next climate change conference which Britain is hosting in Glasgow, Scotland next year.

Previously, Britons had been given until 2040 to wean themselves off their petrol and diesel-fuelled cars. That has been brought forward to 2030 but the timeframe for phasing out hybrid cars has been extended from 2030 until 2035.

The local car industry queried whether Johnson's ambitious timetable could be met in time.

The government said it would spend £1.3 billion ($2.36 billion) installing electric chargers across England as well £582 million ($1 billion) in grants for those buying zero or ultra-low emissions vehicles. 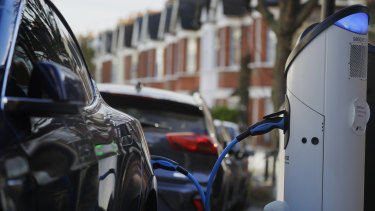 An electric car charges on a street charging port in London.Credit:AP

Sales of electric vehicles have surged in the UK with more than 164,000 pure-electric cars registered as of September 2020, according to Next Green Car but pure electric models and plug-in hybrids still only account for 10 per cent of new car registrations. 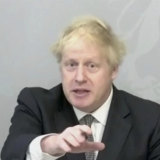 Carmakers Jaguar LandRover, Bently and Vauxhall as well as the operator of the local Nissan plant all welcomed the pledge and said they would be ready for the ban.

Nicholas Lyes from motoring group RAC said the goal was "extremely ambitious" and posed a "monumental challenge" to the car industry to change to electric in time.

He also queried the affordability of the switch to electric vehicles (EVs.)

"It also remains the case that the upfront cost of electric vehicles is currently far too high for most people to afford when comparing them to an equivalent-sized conventional vehicle, so prices will have to come down dramatically in order to make them a realistic option for more people and spark take-up quickly," Lyes said.

"Unfortunately, at the moment EVs are something of a rarity on the used car market which is something that needs to change as around eight million people a year buy second-hand cars, many more than buy brand-new vehicles.

"For now, the Government should focus on how it can better incentivise consumers to go electric," he said.