Children are being ‘left behind’ in Covid vaccination programme, scientist says as he calls for more trials in under 16s so they can receive jab

Children have been ‘left behind’ in the Covid-19 vaccination programme, a member of the Joint Committee on Vaccination and Immunisation has said today.

Professor Adam Finn, from the University of Bristol, said the focus for trials has remained on adults due to children not being seriously affected by the virus.

But he said he wants to ‘get on’ and do the necessary trials in under 16s so they can also receive the inoculation.

More than 45million vaccinations have been given in the UK to date, with 33.3million having received a first dose and more than 11million people now fully vaccinated.

So far, those aged over 45 have been invited to get the jab in England, where around 80 per cent of the over-75s have now received both doses.

Children are at low-risk of falling ill from Covid-19, but they do still play a role in transmitting the virus to those who could fall seriously ill. 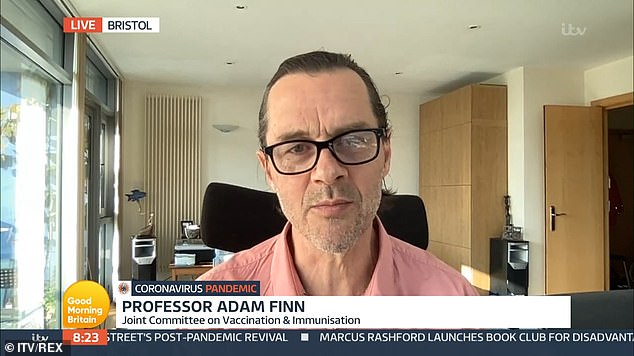 Professor Adam Finn, from the University of Bristol, said the focus for trials has remained on adults due to children not being seriously affected by the virus

Earlier this month, a trial of the Oxford/AstraZeneca vaccine on children was paused while concerns around several unusual blood clots are investigated.

The scientists involved said there were no safety concerns with the trial itself and they were waiting for further information from the MHRA.

Pfizer said that trials of its Covid vaccine in children aged 12 to 15 showed 100 per cent efficacy and a strong immune response.

Professor Finn told BBC Breakfast: ‘I’m a paediatrician and in my normal life I spend my time doing vaccine trials in children.

‘And children are very much prioritised for most vaccines, so it’s a very weird and unusual situation we’re in now because I and other colleagues have spent the last year doing vaccine trials in adults and mostly in older adults, because of the nature of the problems that Covid presents.

‘So the children have really got very much left behind in this programme really because the children for the most part have not been affected by Covid in any serious way.

‘Very, very small numbers of children have been seriously affected, but we’re impatient now to get on and do the necessary trials in children so that these vaccines can start to be used, and actually circumstances are holding us back so it’s a very frustrating situation to be in.’ 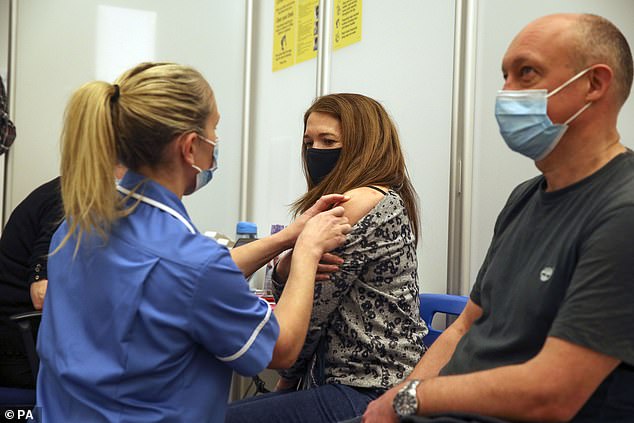 More than 45million vaccinations have been given in the UK to date, with 33.3million having received a first dose and more than 11million people now fully vaccinated 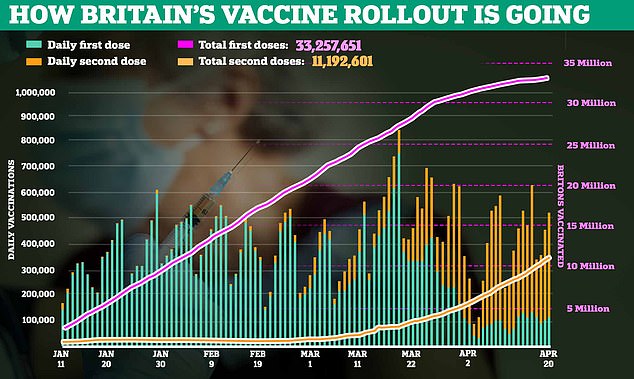 So far, those aged over 45 have been invited to get the jab in England, where around 80 per cent of the over-75s have now received both doses

Professor Finn was asked if there is evidence that the Covid-19 vaccines are a risk to under-16s, and he said: ‘There is evidence for more or less all of the vaccines against Covid that the side-effect rate, the reactogenicity that we see, basically goes up the younger you are.’

He added the only way we can ever know what the risk factor is for children is to ‘run trials in younger people, first of all teenagers and then younger children.’

Professor Finn said scientists would need to ‘monitor very closely their immune responses, and the rates of side effects in order to provide MHRA (the Medicines and Healthcare products Regulatory Agency) with the data that they would need in order to authorise the use of the vaccines in younger people.’

He added that preparations are under way to start more studies in children with Covid-19 vaccines.

It comes as No10 scientists yesterday hinted Britons could enjoy a summer without face masks because vaccines are working so well at bringing Covid-19 under control.

One top adviser said life will return ‘much more towards normal’ in the coming months as more people get immunity from Covid thanks to the vaccine rollout and warmer weather, which helps to keep cases down.

Falling infections, hospital admissions and deaths are tumbling just as scientists hoped they would when the lockdown began. They are expected to drop even further in May and there are no signs that lockdown will have to be extended – social distancing laws are expected to expire on June 21.

The UK yesterday confirmed another 2,678 positive cases – up 3 per cent on last Friday – and 40 deaths, which was an 18 per cent increase on the 34 victims last week. 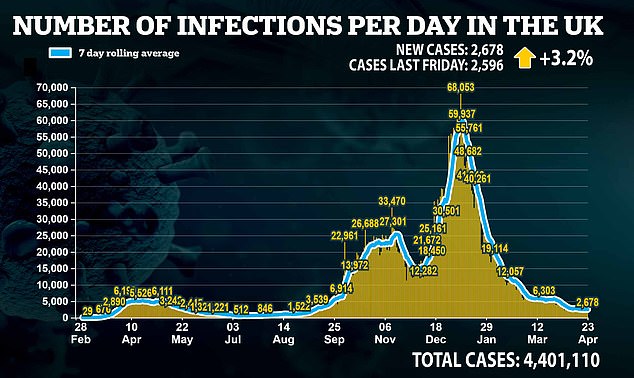 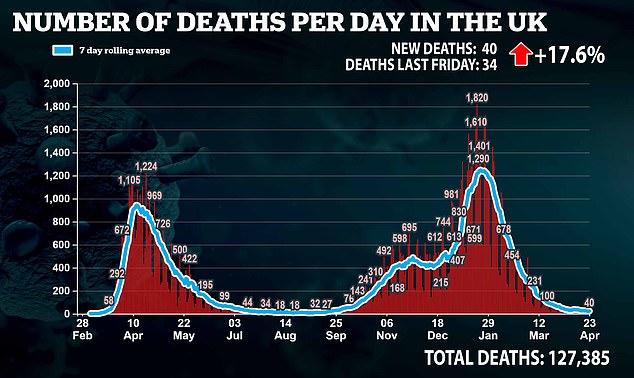 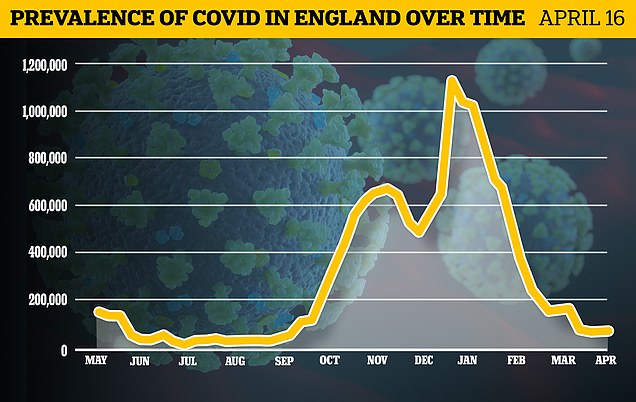 Even though there was a slight increase in deaths and cases week-on-week, they are still continuing to trend downwards, aided by the vaccine programme that gave another 431,000 second doses and 131,000 first jabs.

Meanwhile, an Office for National Statistics report said that only one in 610 people in England had the virus last week despite shops, beer gardens and hairdressers reopening.

And SAGE estimates the R rate is still below one across England, despite a small rise in the latest data to 0.8 – 1.0.

It marked the first time weekly infections have fallen below 100,000 since the week ending September 10, before the fast-spreading Kent variant emerged.

Officials said the latest figures were promising signs that the latest relaxation has had no impact on the epidemic, but they admit it’s slightly too early to see the full effect, given the ONS report only included four days of freedom.

However, NHS Test & Trace has not recorded a surge in positive test results, which is another promising sign. The R rate is going out of fashion now that case numbers are so low, because even small spikes can trigger changes.

Boris Johnson is under mounting pressure to speed up England’s roadmap out of restrictions, and stick to his pledge to be led by ‘data not dates’. The next date restrictions will be eased is May 17.

Analysis by MailOnline has revealed just six per cent of beds are taken up by Covid patients at England’s busiest hospital. For comparison, in the darkest days of January the worst-hit had almost 60 per cent of its patients suffering from the disease.

Oxford biologist Professor James Naismith said ‘the re-opening we have seen this far has not triggered a resurgence.’

And Professor Karol Sikora, an expert in medicine at Buckingham University, told MailOnline the figures suggested the Prime Minister should bring forward his dates for relaxing restriction. The next easing isn’t expected until May 17.

The leader of the Covid Symptom Study, Professor Tim Spector, added that restrictions could also be eased faster in the South of England, where cases are lower compared to the rest of the country.