‘Folding man’, 46, who had a severely deformed spine for over 25 years due to a rare condition can finally walk again after surgeons ‘opened up’ his body via life-changing surgery

A Chinese farmer dubbed the ‘folding man’ can finally walk again after spending six months recovering from four consecutive, high-risk operations to fix his hunched back.

Li Hua, 46, was diagnosed with ankylosing spondylitis, a rare type of arthritis, at the age of 19. But his impoverished family from rural China could not afford to treat him.

He had been unable to stand upright, eat or walk properly for more than 25 years before the life-changing surgery, and had had to rely on his elderly mother to look after him. 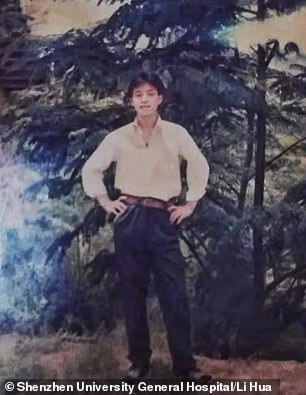 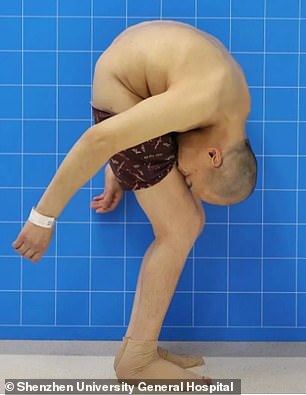 Li Hua (left, pictured at the age of 18) was diagnosed with ankylosing spondylitis, a rare type of arthritis, when he was 19. His had lived with his face pressed tightly against his thighs – with just a 0.7 inches gap in between – due to his severe illness (right, pictured before the surgery)

In the decade before the treatment, Mr Li’s condition had been so severe he had lived with his face pressed tightly against his thighs – with just a 1.86 centimetre (0.7 inches) gap in between.

A team of specialists at the hospital came up with a sophisticated, four-step plan to help Mr Li to stand up straight, and eventually walk again. 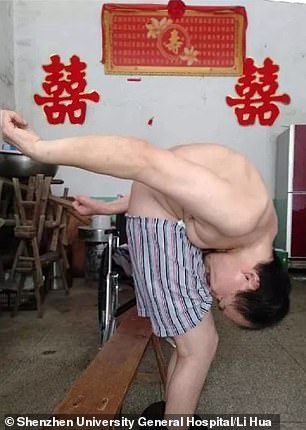 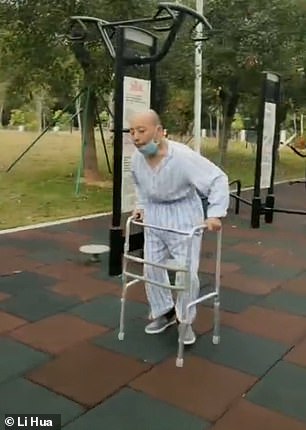 Mr Li had been unable to stand upright, eat or walk properly for more than 25 years before the life-changing surgery (left). Surgeons in the southern Chinese city of Shenzhen performed the series of surgical procedures from June to December last year to ‘open up’ his body (right) 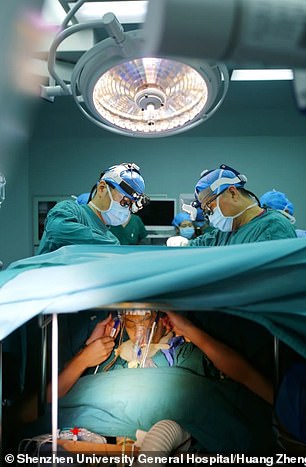 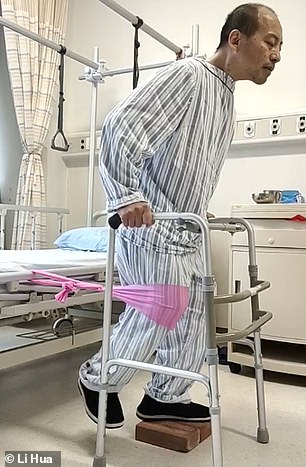 Medics had to remove the dead part of Mr Li’s thigh bones before breaking up and straightening up different sections of his spines – around the neck, chest and waist – to help him raise his head and correct his posture.

At the end of the third procedure in September, he was able to lie down flat and look at his beloved mother properly for the first time in 26 years.

Surgeons then gave Mr Li a total hip replacement in the final operation to enable him to learn to walk again. 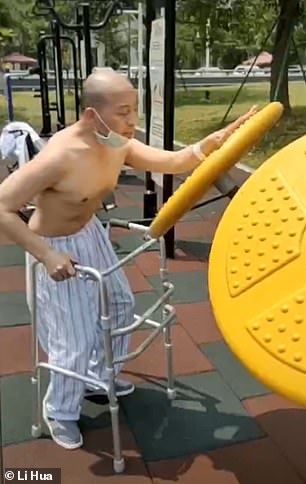 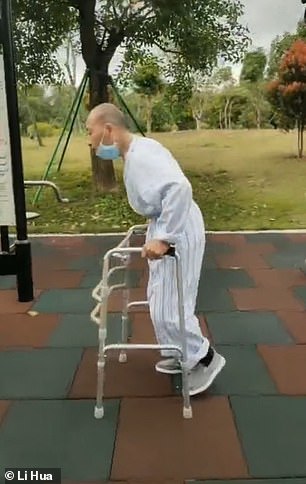 Li Hua is now able to walk slowly with the help of a walking frame and do gentle exercises with his arms. He has largely recovered from the medical procedures, according to Prof Tao

In the following six months, Mr Li remained in the hospital for recovery treatment.

One video supplied to MailOnline by the patient shows him training to lift his right leg while holding on to a walking frame after tying the limb to his hospital bed.

Another recent clip from the man shows him walking slowly outdoors, also with the help of a walking frame, and doing gentle exercises with his arms.

Prof Tao Huiren, Director of the Department of Spine Diseases, told MailOnline that Mr Li was discharged from the hospital last month after mainly recovering from the surgery.

He has returned to his home village and even opened up a small shop there to make a living while continuing with his recovery.

WHAT CONDITION DOES THE ‘FOLDING MAN’ HAVE?

Prof Tao Huiren, who headed Li Hua’s treatment, said Mr Li suffered from ankylosing spondylitis (AS). The condition causes inflammation in the spine, making the back, rib cage and neck stiff and painful.

The inflammation causes bones to wear away, and in response, the body produces extra calcium to grow more bone, sometimes in the wrong places.

This process leads to further bone formation, and the individual bones of the spine may fuse. In severe cases, this can make the spine curve forward more.

This type of spinal curvature, which looks like a forward-hunching posture, is called kyphosis.

Kyphosis is diagnosed when the spine is curved more than 45 degrees. It can be caused by poor posture, abnormal development in the womb, age and an injury.

People with AS may also have inflammation in other parts of their body, including the eyes – leading to a condition called uveitis.

Inflammation can additionally occur in the heel area as well as the knees, elbows, shoulders, and ribs.

AS is the most known member of a more broadly defined disease called axial spondyloarthritis (axSpA).

Symptoms typically start in early adulthood and get progressively worse.

AS affects around 1.6million people in the US. AxSpA affects one in 200 adults in the UK.

Versus Arthritis, a charity in the UK, said historically, ankylosing spondylitis frequently led to permanent spinal deformity which needed surgery.

Professor Paul Emery, the spokesperson for Versus Arthritis, said: ‘With earlier diagnosis and effective therapy, surgery is rarely required now.

‘In the unusual cases where surgery is necessary, it can dramatically improve people’s lives.

‘Physiotherapy is essential to maintain the range of movement, to ensure the back and neck do not stiffen into a fixed bent position.

‘Effective inflammation suppressing therapies, treat the pain and stiffness permitting physiotherapy to continue, even during flares.’