London: One of China’s most senior diplomats in the UK has said it was his duty to rip hair from the scalp of a Hong Konger who was protesting outside the consulate in Manchester because the demonstrators had erected pictures ridiculing President Xi Jinping.

The revelation came as Bob Chan, the man who was dragged onto consulate grounds and beaten, told the media in London that he feared for his safety.

The riot gear and mask-clad gang, identified in the UK Parliament as Chinese diplomats, included the Consul-General Zheng Xiyuan. 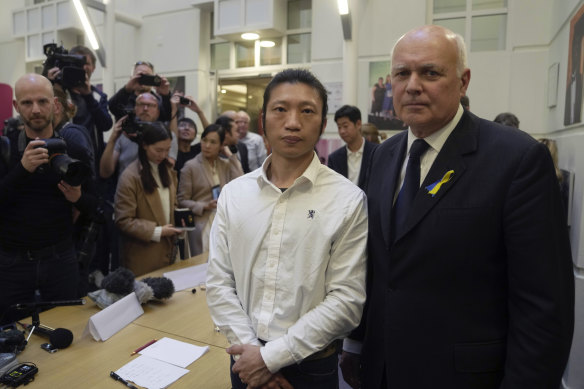 Hong Kong protester Bob Chan, left, who alleged he was dragged into the Chinese Consulate in Manchester and beaten up during a demonstration, poses with British MP Iain Duncan Smith in London.Credit:AP

Conservative MPs and the opposition slammed the British government for its weak response to Chan’s assault, which has so far amounted to a foreign office official “reiterating” to China’s charge d’affairs the “UK’s commitment to peaceful protest and expectation that all diplomats and consular staff based in the UK… respect the UK’s laws and regulations”.

Former Conservative Party leader and the co-founder of the Inter-Parliamentary Alliance on China, Iain Duncan Smith, who hosted Chan at a news conference in London said the government’s response was not good enough, and that the diplomats should be expelled from Britain immediately.

“It’s a gentle rap of the knuckles,” he said.

Zheng told the UK’s Sky News that it was his duty to attack Chan.

“He abused my country, my leader, it’s my duty,” he said in an interview.

“Yeah, I think any diplomat, if faced with such kind of behaviour, we should maintain our dignity of country, of people,” he said. 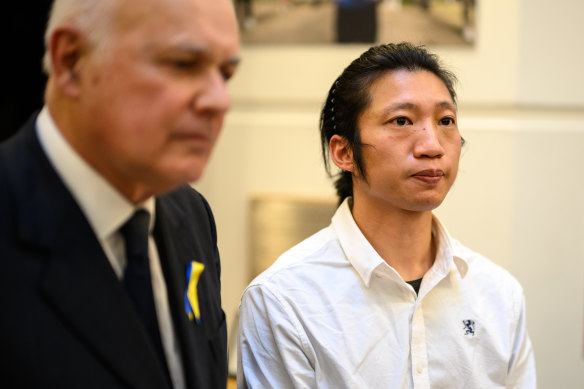 But Chan said he was protesting peacefully and that they had been given permission by police to display the signs on the public footpath.

He said he tried to hold on to the gates when the gang dragged him onto consulate grounds but that “I could not hold on for long”.

“I thought I might be beaten to death because once you’re through the gates, anything can happen,” he said, speaking through a translator.

He said he was still in pain from his injuries and that having hair ripped from his scalp was “barbaric”.

Chan came to the UK in March last year having fled Beijing’s crackdown in Hong Kong. He said he feared for his safety and for that of his family and told The Herald and The Age that he did not want to say if he had family and friends in his homeland out of fear that they could be targeted by the CCP.

“I am shocked and hurt by this unprovoked attack,” he said.

“I never thought something like this could happen to me in the UK.”

Manchester Police officers rescued Chan from the assault and are investigating but MPs said it was unlikely diplomats would be prosecuted.

The opposition’s foreign spokesman David Lammy hit out at the government and said that its weak response to the assault of a UK resident in broad daylight by operatives of a foreign government were the result of its internal chaos.

“The chaos this government has unleashed upon the country through its failed economic agenda is no excuse for the foreign secretary being too distracted to stand up to the Chinese government on fundamental British freedoms,” Lammy said.

“[Foreign Secretary James] Cleverly must communicate in the strongest terms to Minister Yang Xiaoguang that the quashing of peaceful protest will never be tolerated on British streets.

“The consulate must hand over their CCTV footage of the incident so that the Greater Manchester Police can conclude their investigation.

“If any consular officials are found by the police to have committed assault on a protestor, they must be expelled from the UK,” he said.