Anderson was the third wife of Fry, 65, with whom she lived for 15 years before they finally tied the knot in 2012.

The couple shared one son together, Jude, born in 2001.

Fairweather wrote that Anderson ‘squeezed the last drop out of every moment [and] exuded vitality even whilst she was dying, battling the cancer and defying all the doctors’ predictions’. 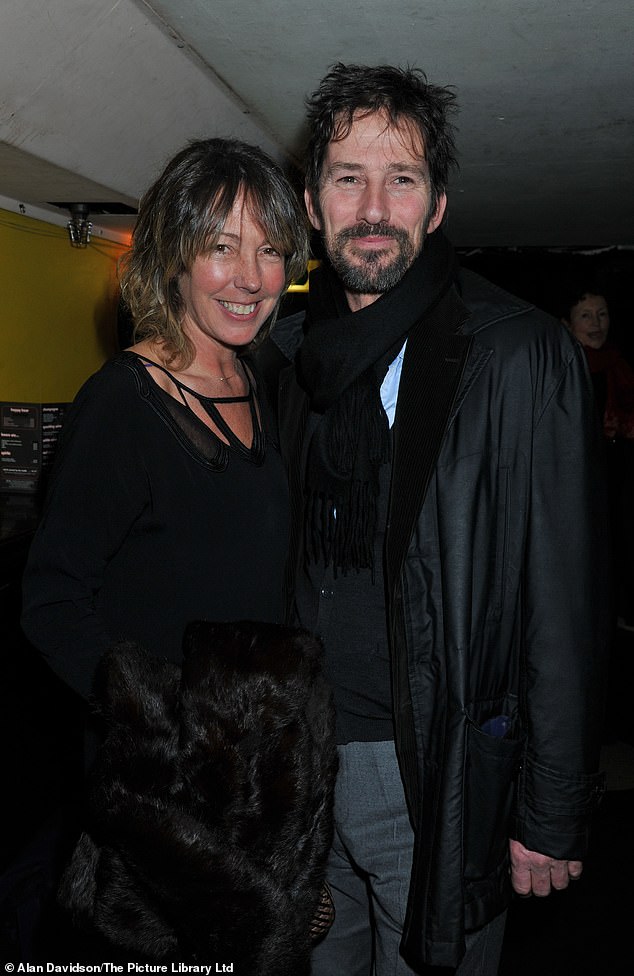 Chocolate heir Cosmo Fry, 65, has sadly lost his wife Lulu Anderson, 60, to cancer (Pictured shortly before their marriage in 2012

With two marriages behind him, Fry’s third time down the altar in 2012 with Anderson proved magically right.

The couple led an ‘enchanted life together – spent partly in Somerset and partly in Provence at the house bought years ago by Cosmo’s late father, inventor and adventurer and heir to the Fry chocolate fortune, Jeremy Fry.

Speaking at the time of their wedding in 2012, Fry said: ‘I’ve got married after 15 years of being with Lulu. I’m not sure why after all this time we decided to marry — after all, having been wed twice before I am aware of the pitfalls. But all good things come to those who wait!’

Unlike his first marriage in October 1982 to the Marquess of Londonderry’s daughter Lady Cosima Somerset, which was at St Peter’s church in London’s Eaton Square, Fry’s 2012 wedding to Anderson took place at Bath register office with just a few close friends.

He and Anderson had the union blessed at a church and, some days later, held a party for 200 at their home, where guests included Richard E. Grant and Jasper Conran.

Friends praised Lulu Anderson’s ‘unbroken’ spirit as she ‘squeezed the last drop out of every moment’ while battling her illness (pictured: Lulu Anderson with husband Cosmo Fry)

Scores of other tributes to Anderson have flowed in, with actress Melissa Knatchbull describing her as ‘one in a million’, while former Tatler editor Jane Procter said she was ‘always a joy to be with’.

Though also in awe of Anderson’s vivacity included writer Annabel Heseltine, the elder of Lord Heseltine’s daughters, who said that, above all else, she was ‘incredibly loyal – always there for her friends when they needed her, as she was for me’.

Eton-educated Fry, 65, inherited his father’s entrepreneurial streak.  He and his wife established the Big Sleep hotels, numbering John Malkovich among their investors.

Cosmo subsequently married Amanda Aspinall, daughter of late gambling tycoon and animal park owner John Aspinall, a close friend of the fugitive Lord Lucan. They had a daughter, March, and son, Orson – sometime boyfriend of model and fashion designer Alexa Chung – before that union too ended in divorce.

With Anderson, Cosmo had his third child Jude who is now romantically linked to Ella Clapton, daughter of guitar legend Eric Clapton.