Seismic shifts in the travel behaviour of Melburnians brought about by a three-fold increase in working from home could see 100,000 fewer people going into the city for work, affecting the number of commuting trips for more than a decade.

National Institute of Economic Research executive director Peter Brain said modelling suggested the effect of COVID-19 was rewinding the past seven years of growth in work-related trips, cutting commuting into the city for work by 17.5 per cent and "taking us back years in terms of the use of infrastructure". 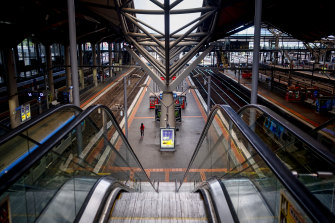 Cross-city trips and journeys across the state between regions for work were also forecast to suffer dramatic slumps, by 16 per cent and 11 per cent respectively by 2022, compared with expected levels pre-pandemic, the same analysis showed.

The bulk of state government spending, as well as the $49 billion of federal money earmarked in this year's budget for infrastructure, will go to large transport projects. No direct investment was allocated for social housing.

Dr Brain said NIER's research shows the number of city work trips projected for 2022 was not expected to recover to levels that were forecast pre-COVID until 2035, meaning, “It will be 13 years before we need to invest in office capacity to catch up to what would have been required … before COVID". 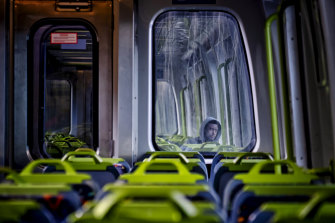 A nearly empty train during what would have normally been peak hour in April. Credit:Photo Luis Ascui

And even if there was no long-term change to the number of people working from home, work-related travel into the city would fall 9.2 per cent due to the economic shock of the pandemic, the modelling showed.

The Allens survey, which was geared towards asking investors and major transport companies which infrastructure stimulus would be most effective during COVID-19, said: “Roads and rail tracks won’t solve all our problems, especially now”.

Transport projects dominating the nation’s infrastructure agenda were dreamt up before the pandemic and will be heavily affected by changes in travel patterns, the law firm warned. Social infrastructure projects would deliver longer-lasting employment benefits and could address some of the “structural inequalities” the pandemic had exacerbated.

“If you’re going to spend this intergenerational money … you need the benefits to be very broad,” Allens infrastructure lawyer David Donnelly said.

“At the moment, more than 90 per cent of the pipeline is transport and that’s out of balance.

“We’re not saying don’t do them, but you could easily see among the ones pencilled in and think, do we really need that?"

"Things like renewables and social infrastructure do look a bit more attractive at the moment," Mr Spence said. "That has a bit to do with COVID, that's a new risk we hadn't thought about, but there's already so much risk in construction.”

The $16 billion North East Link and the $6.7 billion West Gate Tunnel should be scaled back, while the $50 billion Suburban Rail Loop should use light rail instead of trains and suburbs in the north should be prioritised over the south-east.

The government should take advantage of slower population growth and reduced travel to deal with the backlog of social housing and community infrastructure in the outer and some middle suburbs, he said.

Deputy Prime Minister Michael McCormack's spokesman said the federal government’s pipeline of works would provide local jobs and “bolster local economies right across the country while delivering the vital infrastructure needed to get Australians home sooner and safer – now and into the future”.