A sharp rise in homelessness during the coronavirus pandemic will be made worse by the federal budget's failure to directly invest in social housing, advocacy groups warn. 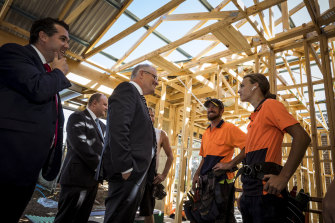 "When financial support disappears through JobSeeker and JobKeeper, it's going to be fairly horrific," she said. "It's going to be like falling off a cliff."

Launch Housing chief executive Bevan Warner said Australia was staring at a homelessness crisis because not enough was being done to increase the supply of social housing.

Research commissioned for the organisation shows that before the coronavirus pandemic, about 290,000 Australians were homeless, an increase of 14 per cent in the four years to 2018-19.

In Victoria, more than 45,000 households are on the social housing waiting list and since the pandemic there has been a 14-fold increase in the number of people Launch Housing has placed in emergency accommodation.

Mr Warner expects this demand will grow as households cut back expenses and flock to cheaper rental properties.

"People will have less money in their pockets and there will be fewer options to be housed, as other economic casualties of the recession shuffle back and take up all the low-income housing options," he said.

Federal Housing Minister Michael Sukkar said while the delivery and construction of social housing was the responsibility of state and territories, the Morrison government was making significant investments in the sector.

"The Morrison government is doing more in the social and affordable housing space, particularly through community housing providers, than any other federal government before us," he said.

He said the National Housing Finance and Investment Corporation estimates that by providing an additional $1 billion of low-cost finance in this year's budget, 2500 new and existing affordable homes could be supported by community housing providers.

"There’s a gap between what it costs to operate and build social housing and what people can afford to pay in rent," she said.

This, she said, was why government investment was so important.

She said 433,000 new social housing properties were needed across Australia, and governments should start reducing this backlog by building 30,000 more dwellings over the next four years.

"A lot of people were highlighting the need for action on social housing and the government just chose to ignore that advice," she said. "It seems like such a missed chance to do something significant that would really improve people's lives and boost the economy."

Property Council of Australia chief executive Ken Morrison said while he welcomed the additional funding in the budget to provide low-cost finance for community housing providers, more work was needed.

"We’ll continue to advocate for measures which incentivise the private sector to deliver more affordable housing, especially for key workers and older people at risk of homelessness, and to do this at scale," he said.

While federal Labor has proposed a $500 million plan to repair thousands of public housing dwellings, Victorian Premier Daniel Andrews hinted that social housing was something he was looking at "very, very closely" in the upcoming state budget.

Almost 2000 people are living in hotels across Melbourne after the state government funded rooms for the city's homeless during the pandemic.