The London stock market opened up this morning after being boosted by Chinese factory data raising hopes of an revival in economic activity amid the coronavirus.

The FTSE 100 rose by 116 points or 2.09 per cent to 5,680 shortly after opening this morning as Britain’s second week on lockdown due to the pandemic continues.

It continues a string gains for the index of the UK’s biggest firms after it rose nearly 1 per cent yesterday following earlier falls, and 6 per cent last week overall.

In the US healthcare led Wall Street higher, with the Dow Jones ending yesterday up 3.19 per cent, while the S&P 500 gained 3.35 per cent and the Nasdaq 3.62 per cent.

YESTERDAY: The FTSE 100 gradually rose throughout yesterday to end nearly 1 per cent up

The UK gains follow China’s manufacturing purchasing managers’ index (PMI) rising to 52 in March, up from a record-low 35.7 in February and above forecasts of 45.

Anything above 50 is considered growth, and the promising data comes even as much of the world shuts down in an effort to control the infection’s outbreak.

Nigel Frith, a senior market analyst at AskTraders, told MailOnline: ‘Chinese factory data overnight offered a flicker of hope that the world’s second largest economy is firing up again, even as much of the rest of the world grinds to a halt.’

But others said underlying activity probably remained poor as the improvement measures the net balance of firms reporting an expansion or contraction. 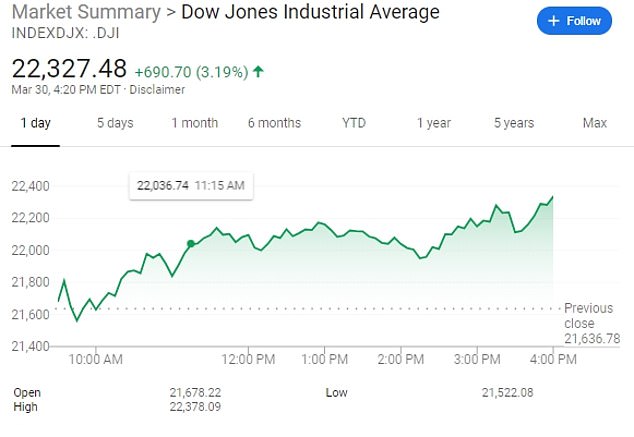 In the US healthcare led Wall Street higher, with the Dow Jones (pictured) ending yesterday up 3.19 per cent, while the S&P 500 gained 3.35 per cent and the Nasdaq 3.62 per cent 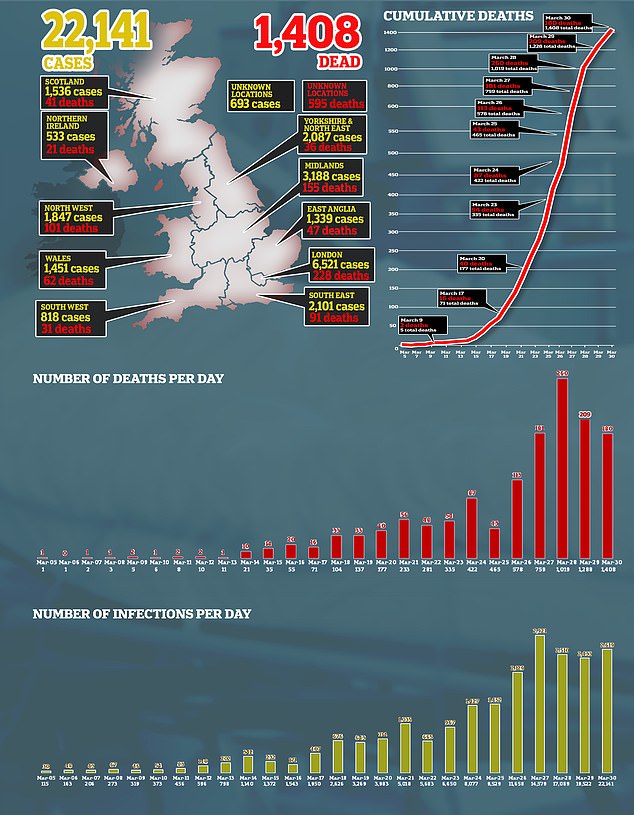 China’s National Bureau of Statistics also warned that the rebound did not signal a stabilisation in activity, and was partly due to the very low base in February.

Cliff Tan, East Asia head of global markets research at MUFG, said: ‘The fact that the numbers were not in the 60s shows that this is not going to be a V shaped recovery.’

The number was enough of a relief though to help MSCI’s broadest index of Asia-Pacific shares outside Japan rise 0.94 per cent. That still left it down 22 per cent for the quarter, its worst performance since 2008.

In the Asian markets, the Japanese Nikkei 225 index closed down 0.2 per cent. In China, the Shanghai Composite is up 0.2 per cent, while the Hang Seng index in Hong Kong was up 0.9 per cent. 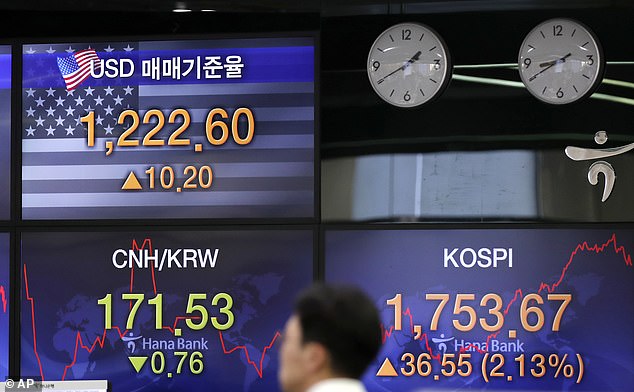 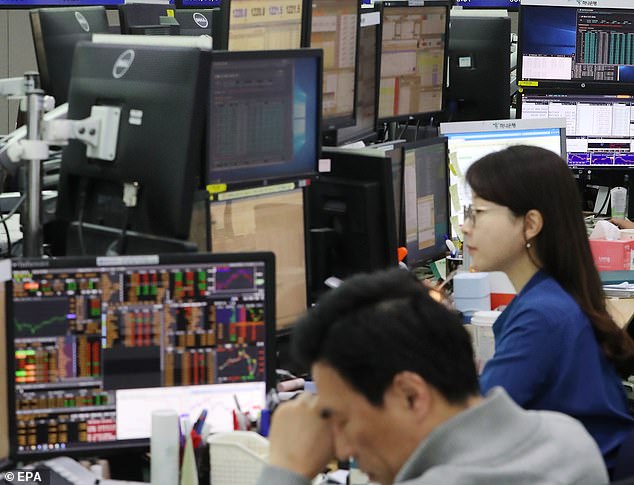 In currency exchange, the pound was quoted at $1.2351 this morning, down from $1.2404 at the London equities close yesterday.

News on coronavirus remained grim but radical stimulus steps by governments and central banks have at least provided some comfort to economies.

Infections in hard-hit Italy slowed a little, but the government still extended its lockdown to mid-April.

California reported a steep rise in people being hospitalised, while Washington state told people to stay at home.

Trade ministers from the Group of 20 major economies agreed yesterday to keep their markets open and ensure the flow of vital medical supplies.