It mutt be love! Couple return with more than a wedding plan following engagement in Mauritius… as they adopt two stray dogs they found on the beach and bring them home too

A kind-hearted couple who got engaged in Mauritius have returned back home with more than a just a wedding to plan after adopting a couple of stray dogs.

Ben Jenkins, 27, and his new fiancé Charlotte Long, 29, were taken aback by the number of stray dogs running loose during their dream trip to the picturesque island earlier this month.

While staying at the Long Beach Mauritius resort, the couple came across a small timid male dog and a young female that would beg around for food. The couple instantly fell in love with the canine pair who they later named Mauri and Moo.

By the end of the holiday Ben and Charlotte couldn’t bear to part with their new four-legged-friends so contacted 4 Paws Rescue and Relocation to find out how they could adopt to two dogs and bring them back to their home in Waterlooville, Hampshire. 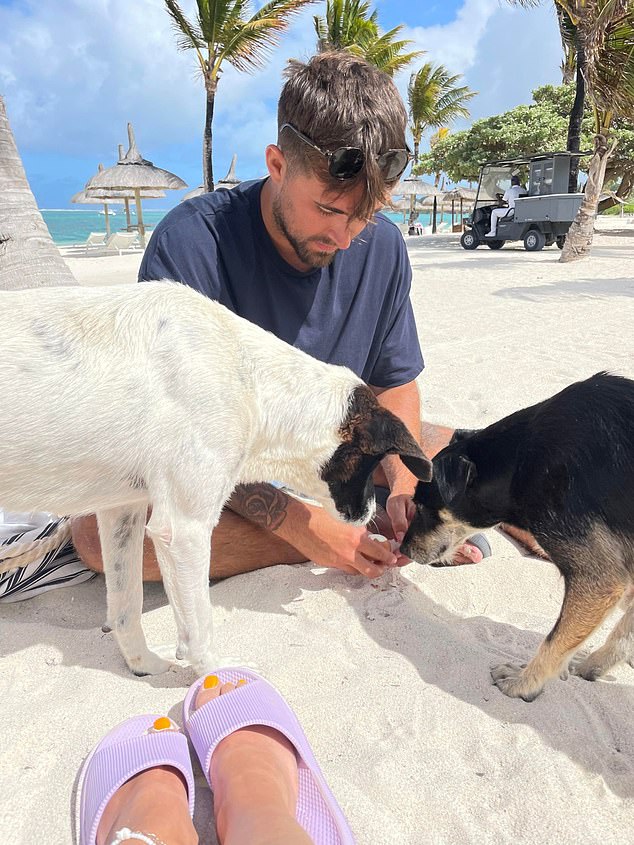 The couple took Moo (left) and Mauri (right) food from the hotel’s breakfast buffet after being horrified by how thin the dogs were.

The couple were horrified to be told that locals allegedly drug and drown stray animals to combat the problem on the island.

Ben set up a fundraising page to help cover the staggering £3,500 costs to sterilise, vaccinate, and house the dogs before they were deemed fit to fly over to the UK to be rehomed.

Ben set up the GoFundMe page, writing: ‘We are asking for your help to bring these babies to safety and stop them from having to simply survive each day and instead give them a life full of love and food and fun. (The excitement they had when we gave them a piece of ribbon to play with almost had us in tears).’

The fundraising target was smashed within 24 hours after animal lovers flocked to the page to donate.

After successfully raising the funds, Mauri and Moo are now going through checks and being treated while they await their flight for their new home.

Ben said: ‘We first met the dogs when we adventured to the beach that is part of the hotel we were staying at. 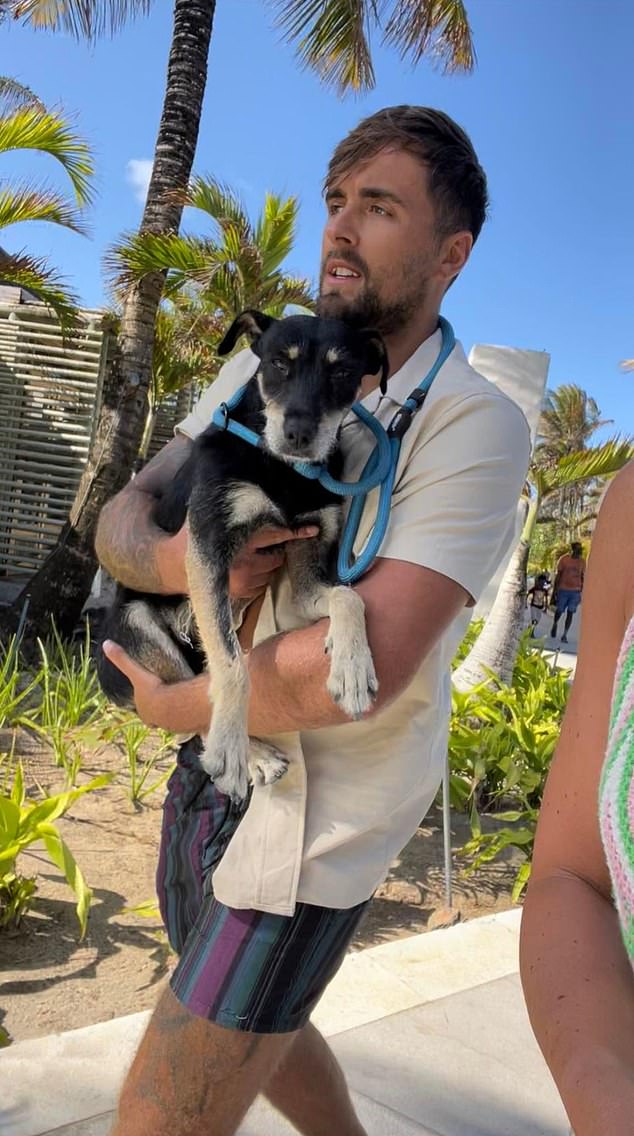 The couple instantly fell in love with the duo. Ben is pictured carrying Mauri during the holiday.

‘The male we met first and he was a timid but friendly dog who seemed very young, would often wander round to the tourists looking for food and finding some shade to lay in.

‘And then the female we met again on the beach the next day I believe and we just fell in love with her.

‘Unlike the male she was more on edge and afraid of mostly anything that approached her. Any staff or local person who would come near or she would see approaching she would sprint away or take such a wide berth.

‘Since we met them every morning we would walk along the beach to meet them and then go for our breakfast and fill up napkins full of eggs and bacon etc to take for them to eat.

‘We soon found that eggs and cheese were their favourite so we made sure to then take surplus of those. 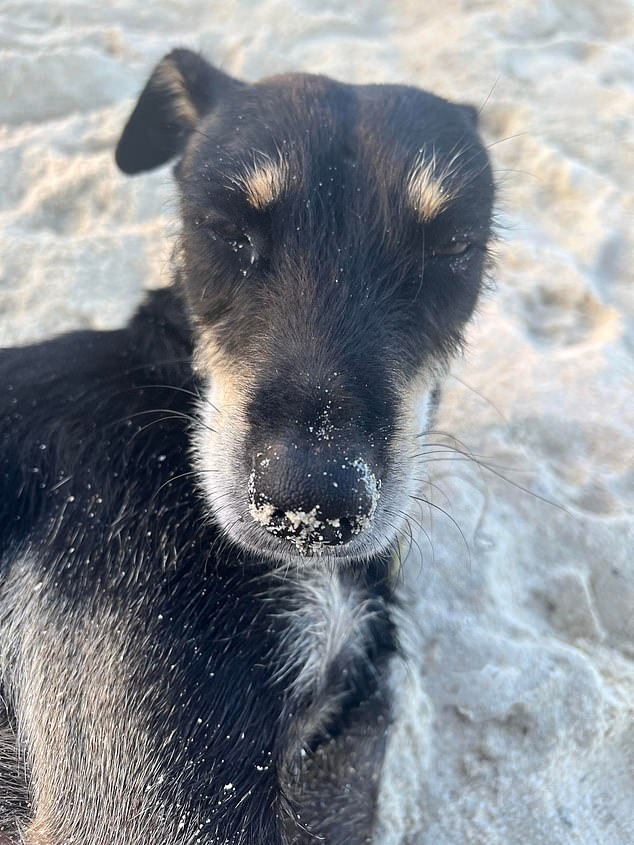 After falling in love with Mauri (pictured) and Moo during their beach holiday, they couple said they ‘had to do something’.

‘They stole our hearts as they were so, so underweight yet would take food ever so gently. It was this that made us assume that the dogs were in fact the hotels as they would always be around the beach of the hotel.

‘Despite how fearful they are, they have both latched onto us and followed us everywhere, they even allow us to stroke and cuddle them which makes you imagine the kind of treatment she in particular has been accustomed to.’

The loved-up pair were mortified after a rescue centre claimed that stray dogs are often caught by businesses and killed. 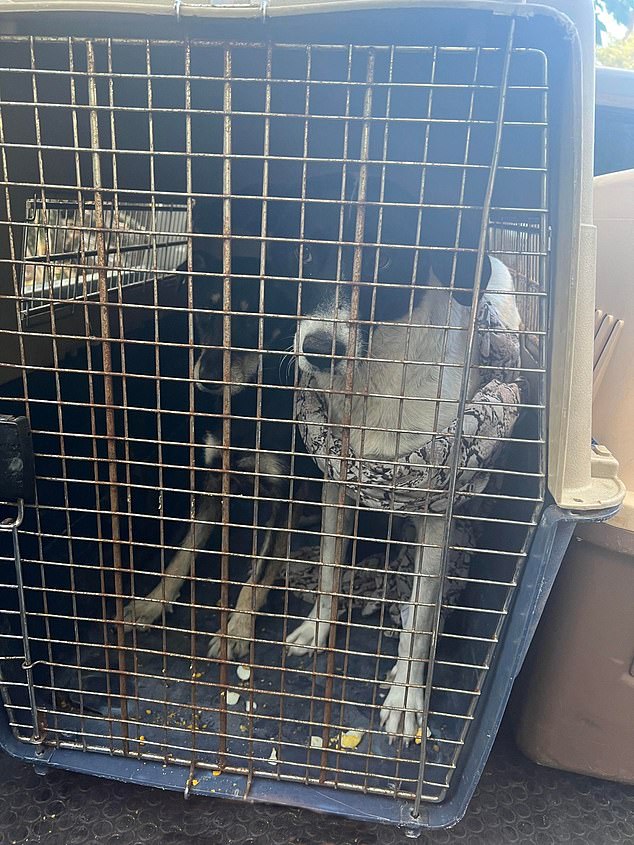 The two dogs are currently going through treatments before they’re allowed to fly home.

Ben continued: ‘We could not believe what we were hearing and this made up our minds that we had to do something to help save these poor babies from that potential fate.

‘We have named the girl Mauri after Mauritius as the island is so beautiful and her soul is so genuine.

‘Even if the government is so bad and inhumane towards their stray dogs, the island itself is incredible.

‘The boy we have named Moo as he has markings like a cow and loves to lick your hands like a farmyard cow.’

Mauri and Moo are still going through treatments to allow them to fly over to the UK but should be in their forever home in the coming days.