Covid was the THIRD leading cause of death in England last month: Official figures reveal only dementia and heart disease killed more than the virus

Covid was the third leading cause of death in England last month after the country lifted all restrictions, official figures showed today.

Office for National Statistics (ONS) data revealed the virus was behind 2,162 fatalities in August, the equivalent of almost 70 per day. This was more than double the number recorded in July, when it was the ninth biggest killer.

It means Covid has now reached its highest rank for monthly fatalities since March, when the brutal second wave was receding.

There were 40,460 deaths from all causes in England last month, a tenth more than the five-year average for the final month of summer. Covid was behind 5.3 per cent of the fatalities.

A separate ONS report published today found coronavirus deaths surged by almost a third over the second week of September. The virus was mentioned on 857 death certificates in the week to September 13, up from 659 in the previous seven-day spell.

But the Government agency said the surge was skewed by the August bank holiday, which saw fewer registrations in the previous week. But there was a slight uptick in reported deaths over the time frame.

It comes amid fears Britain’s Covid cases may be starting to rise again, in a sign the predicted wave of infections following the return of schools and workers back to the office may be beginning to materialise.

If the upwards trend in cases is genuine, hospitalisations and deaths are likely to follow suit in the coming weeks.

Boris Johnson last week unveiled his winter plan to try to keep the virus at bay in the colder months and prevent the country from returning to another lockdown. Ministers hope booster vaccines for over-50s and jabbing over-12s will help to keep a lid on Covid and stop the NHS facing unsustainable pressure. 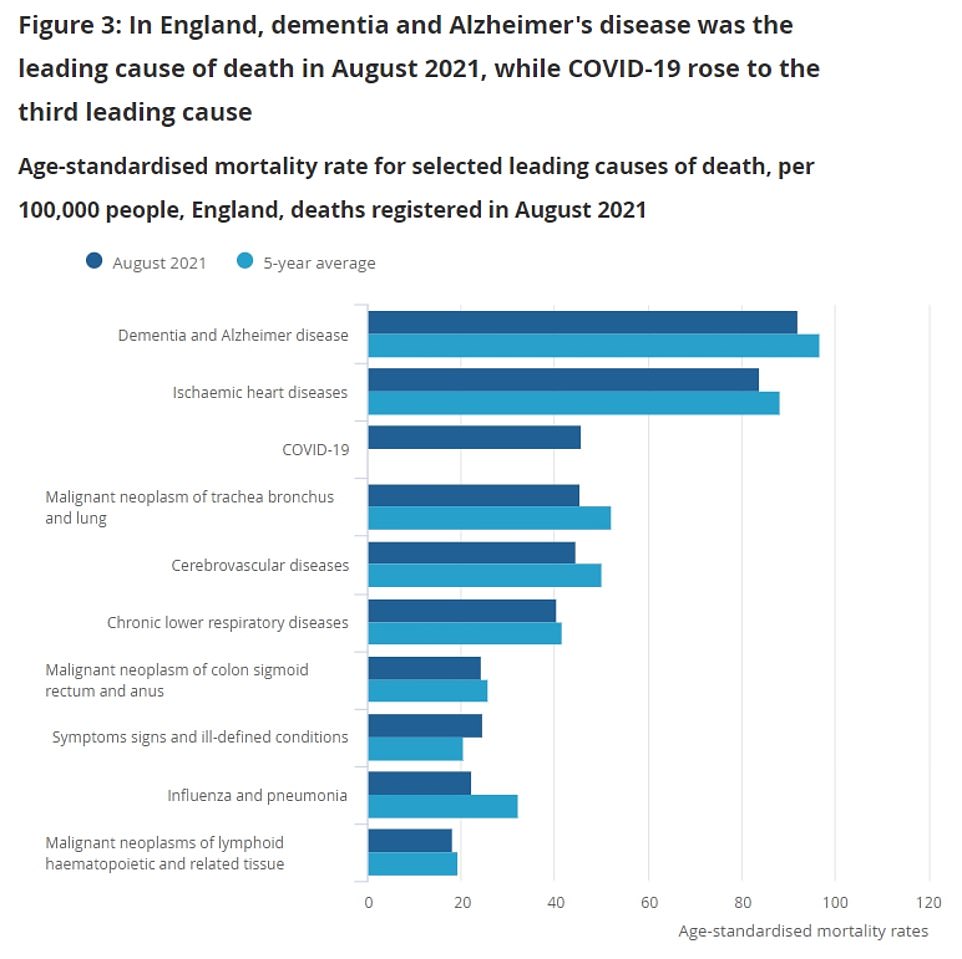 Covid has become the third leading cause of death in England, official figures showed today. They revealed that over August there were 2,162 deaths mentioning the virus. Only dementia (4,417 deaths) and heart disease (3,982) sparked more deaths 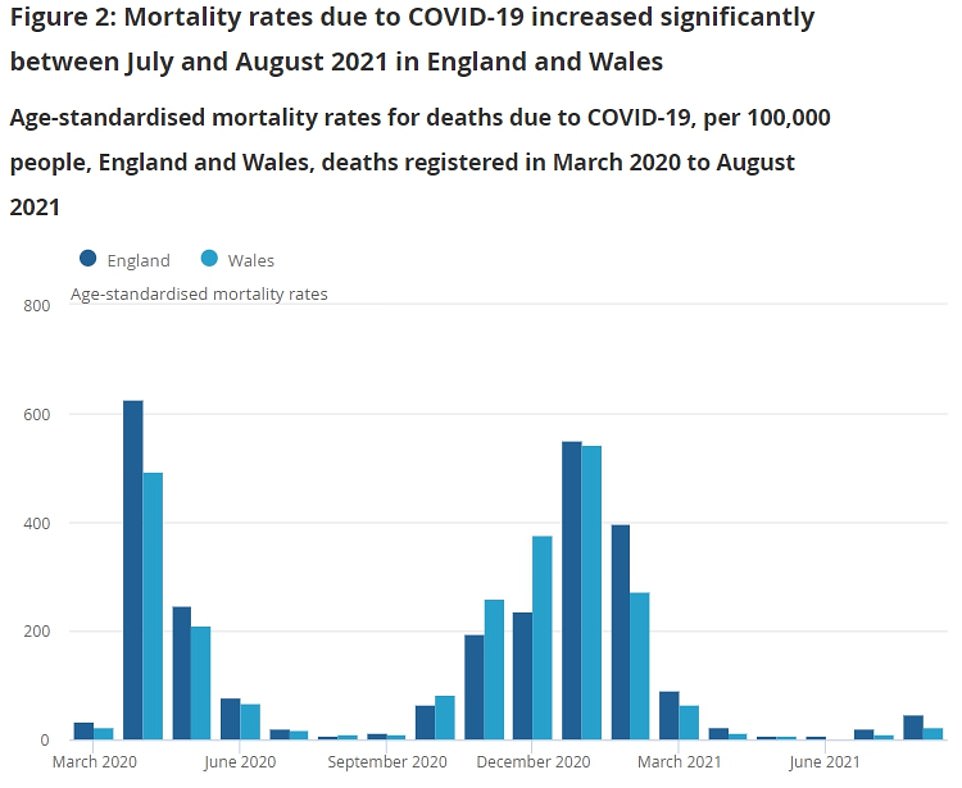 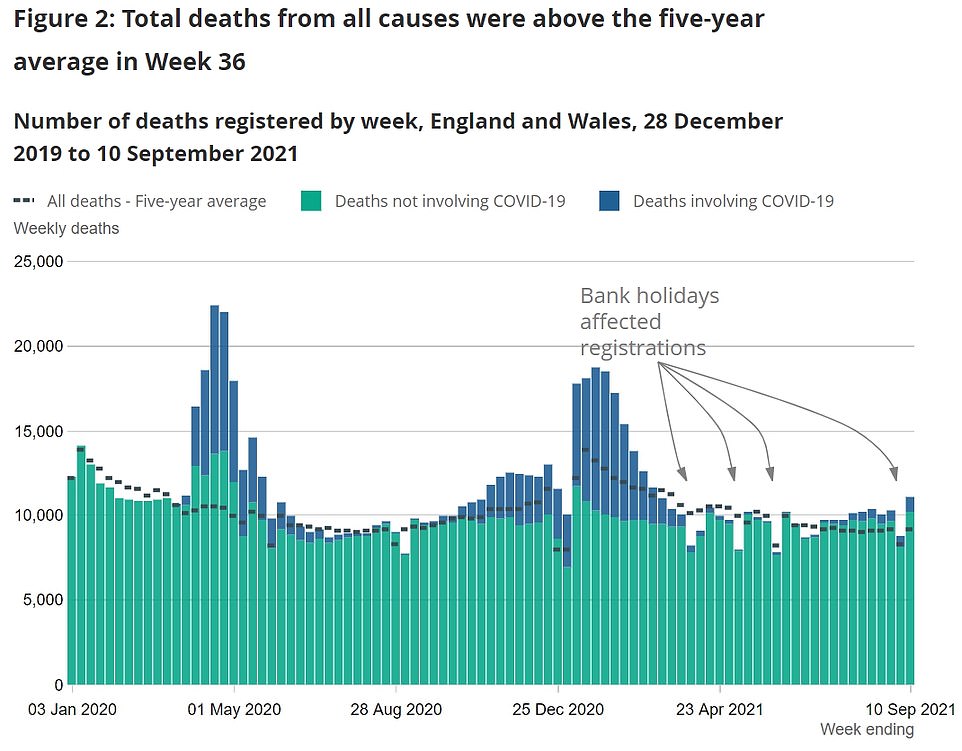 The Office for National Statistics released a separate report today showing weekly deaths due to Covid had risen by almost a third in a week. They said there were 857 deaths that mentioned the virus, but pointed out the sharp rise is likely due to the bank holiday at the start of September, which delayed reporting of figures 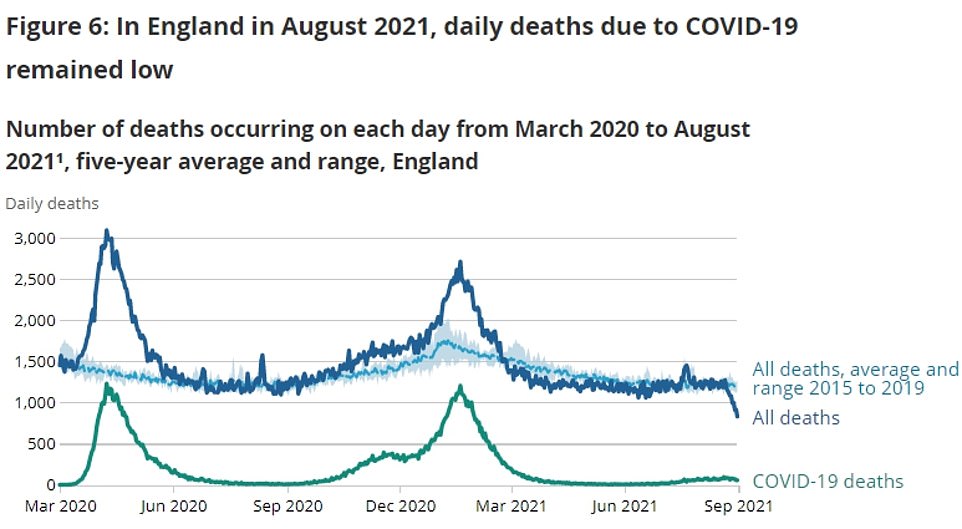 The above graph shows the number of deaths in England due to Covid (green line) and total fatalities (dark blue line) by the date they occurred. It dips for September because it takes at least a week for a death to be formally registered, and then for statisticians to note down the date at which it occurred 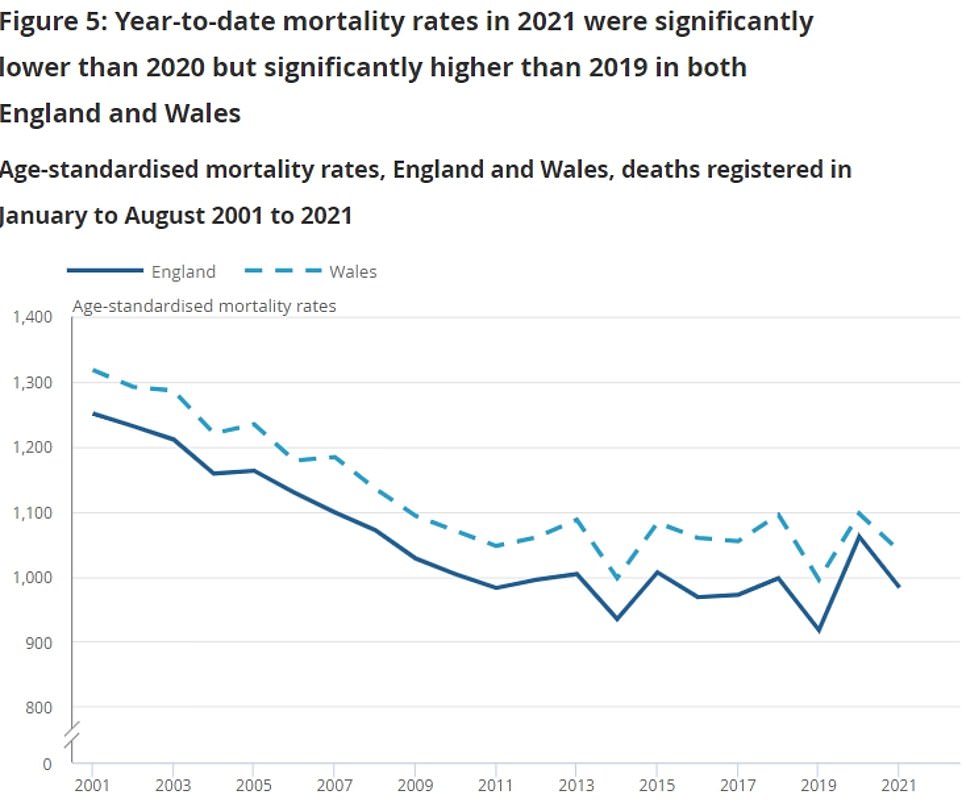 The ONS report showed there were a further 294 deaths in August that mentioned Covid, but did not record it as the underlying cause of death.

This means that, overall, there were 2,456 death certificates that included the virus, or six per cent of the total number of fatalities.

The North West recorded the highest number of fatalities due to Covid (376) last month, followed by London (320) and Yorkshire and the Humber (300).

The Office for National Statistics (ONS) found that case rates this summer were highest among office workers, bankers, teachers and other professions.

Its report also found that white people had higher infection rates per population size in May and July than ethnic minorities for the first time in the pandemic.

The figures suggest the drive to get people back to work after the winter lockdown helped fuel the spread of the ultra-transmissible Delta variant, which was first seeded in the country in late April.

There were 235 confirmed cases among white people per every 100,000 person-weeks between May 23 and July 25. For comparison, the figure was as low as 98 per 100,000 in other ethnic minority communities.

During the second wave, which began last September, cases were highest among Pakistani, Bangladeshi, Indian and black adults.

On the other hand, the South West recorded the fewest number of Covid deaths (148), followed by the East of England (167) and the North East (171).

Every region recorded more Covid deaths in August compared to the previous month.

In Wales there were 70 deaths due to Covid recorded in August, which was more than double the 33 recorded in the previous month.

Covid was also the seventh leading cause of death in nation, up from the 22nd place in the previous month.

Separate weekly data showed Covid deaths had surged by almost a third week-on-week, but the ONS said this was likely down to the bank holiday on August 30 which will have affected the number of registrations.

Around one in 13 (7.8 per cent) of all deaths registered in England and Wales in the week to September 10 mentioned Covid on the death certificate.

Some 120 care home resident deaths involving Covid in England and Wales were registered in the week to September 10, up from 89 the previous week.

In total, 43,156 care home residents in England and Wales have had Covid recorded on their death certificate since the pandemic began.

The ONS figures cover deaths of care home residents in all settings, not just in care homes.

It came after Britain’s daily Covid cases rose significantly yesterday in the first hint of a delayed back to school surge.

The Department of Health’s daily update showed there were 36,100 new infections in the past 24 hours, up 17 per cent on the figure last Monday.

There were signs that the trend of the epidemic was starting to change over the weekend as cases crept up by around 2 per cent following a week of sustained decline.

Figures from the Government’s Covid dashboard for England show that case numbers fell in every age group in the past week except children between five and 14.

Experts had for weeks warned that the return of schools in England, Wales and Northern Ireland at the start of the month could trigger a fresh wave of infections.

Scotland saw a meteoric rise in cases almost immediately when education resumed in the middle of August, but the rest of the country looked to have avoided a surge.

The Government’s scientific advisory group has also warned that a sudden end to working from home could trigger a new spike in cases this autumn.

Meanwhile, the UK’s daily Covid deaths fell by a fifth in a week with 49 more victims. Fatalities lag by a few weeks behind cases due to the time it takes for people to become seriously ill.

No new Covid hospitalisation data for the UK was released yesterday but latest NHS England numbers show that figure was down 14 per cent on September 14.