Australian households bought more items online in the first week of December than ever recorded before and nearly one million residences shopped online for the first time this year, in what is expected to become a permanent shift in shopping patterns.

More than 900,000 households bought something online for the first time between March and August, Australia Post figures show.

In early December, there were 42 per cent more online purchases made than there were last year.

"The first week of December and the week of Black Friday recorded the biggest number of online purchases Australia has ever seen," Australia Post noted in its latest report.

An Australia Post spokesperson said they have "consistently been delivering over 13 million parcels each week in December".

Despite the record volume of deliveries, Australia Post and other logistics providers are confident items will arrive in time for Christmas, given orders were placed by the cutoff dates of December 12 for regular post and December 19 for express.

At the peak of lockdown in April, Lakemba in Sydney's south-west was the NSW suburb with the most households making an online purchase for the first time.

Lucy Gow is one of many who have done all their Christmas shopping without going into a physical store for the first time this year. 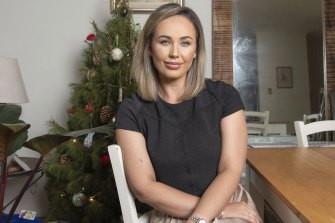 “It just feels safer to do it online,” Lucy Gow said of shopping this year.Credit:Christopher Pearce

She said the convenience of shopping online in a year when most stores have improved their checkout platforms along with health concerns that come with visiting stores drove her decision to buy gifts online.

"I don't really want to go and try to beat the crowds and feel claustrophobic when we are still in a pandemic, it just feels safer to do it online," Ms Gow said.

"And as a result of COVID the market has shifted so significantly, it's much more accessible and easier to shop online."

Andrey Vasnev, head of Business Analytics at the University of Sydney's business school, said the jump in households shopping online for the first time pointed to a structural shift in behaviour.

"The move online was already happening but COVID-19 brought it to a completely new level, it made it the norm," Associate Professor Vasnev said.

"The whole population suddenly had to know how to buy online and get comfortable with it … I would say a lot of the people who started shopping online will continue to do that."

Rolling lockdowns, such as Victoria's second wave and this month's outbreak in Sydney's northern beaches, have also prompted shoppers to go online.

The growing northern beaches cluster has also coincided with the Christmas week, leading residents to look for ways to complete their last-minute shopping from home.

Shippit, which manages logistics for a number of retailers, said there was a surge in express delivery orders following last week's lockdown announcement for the northern beaches.

Major online gift card seller Prezzee has also reported a 171 per cent increase in sales over Saturday and Sunday in Sydney, one of its highest increases on record.

While the initial surge in online shopping occurred between February and April, with a 56 per cent jump coinciding with the start of national COVID-19 restrictions, this growth has continued steadily throughout the year.

Associate Professor Vasnev said the growth bucked predictions that the pandemic would lead to a drop in overall sales.

Instead, online and in-store spending spiked in March and then dropped in April before rebounding to above pre-COVID levels for the rest of the year, ABS data shows.

"When the lockdown was announced people went crazy and we had the toilet paper crisis and then at the beginning of lockdown, they'd already bought a lot of stuff so there was a drop," Associate Professor Vasnev said.

A spokeswoman for DHL, which provides express international delivery services, said deliveries coming into Australia have jumped 25 per cent this year, while outbound shipments have gone up 48 per cent.