Why is the fine town of Bathurst honouring for perpetuity a convicted war criminal, who among other atrocities shot a fellow soldier thought to be a potential whistleblower and gunned down unarmed prisoners, a pastor and two Boer children?

I refer to Lieutenant Peter Handcock who in February 1902 was executed with Lieutenant Harry “Breaker” Morant, after being court-martialled and convicted of committing murder while on active duty. 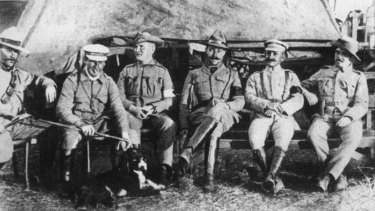 As one whose latest book is Breaker Morant, I was stunned last month when one of my researchers, passing through Handcock’s hometown, sent me a photo of Bathurst’s South African War Memorial, devoted to the honour of local men who served in the 1899-1902 South African War.

And … In memory of those who gave their lives for the Empire. And there, right at the bottom, in bronze lettering, is the name, Lieutenant P. J. Handcock.

Sorry, what? Mentioning the name of Handcock in a roll of honour?

He was the most dishonourable soldier to disgrace Australia that we know of. (Morant himself was English.) And he didn’t “give his life for the Empire,” he was executed for forming a significant part of the worst British atrocities in the whole Boer War.

How did this happen?

When Lord Kitchener himself opened the Boer War Memorial back in 1910, a persistent story is that he only did so after Handcock’s name was removed.

It was restored in 1964 after lobbying by Peter Hancock – his son, and a local resident – which saw the name of the only Australian ever executed for war crimes, affixed below the names of the good and decent Bathurst men who served with honour.

I hold – believe me – no brief for Lord Kitchener. But on this occasion the British warlord was right, and Handcock’s name should not be there. 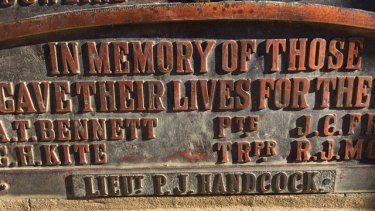 The Bathurst War Memorial with the name Peter Handcock on the plaque.

Handcock committed many atrocities while serving with the infamous British unit, the Bushveldt Carbineers, most of them under the direct command of Breaker Morant.

In early July 1901, Handcock shot and killed a fellow soldier, Trooper Barend J. Van Buuren, who was thought to be a risk of whistleblowing about the Carbineers’ atrocities: including the shooting of six unarmed Boers, among whom was a 12-year-old boy.

In early August 1901, Handcock personally put a revolver to the head of an unarmed, wounded Boer prisoner, Floris Visser, and fired, killing him. 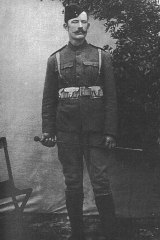 Peter Handcock was executed along with Breaker Morant.Credit: Supplied

A fortnight later he shot and killed the Reverend Daniel Heese, a passing pastor – because Morant felt Heese could possibly tell the authorities about the Carbineers shooting unarmed prisoners. Though acquitted of that particular murder despite the overwhelming evidence, in 1929, another accused Carbineer, George Witton wrote to Major J. F. Thomas – Handcock and Morant’s defence counsel – admitting it was all true, and that Heese’s murder was “a most cold-blooded affair. Handcock described it all to me”.

Handcock also helped organise and participated in the cold-blooded execution of the same eight surrendering Boers that Heese was concerned about. “We are justified in shooting everything in sight,” Handcock said to a fellow trooper by way of explanation for such outrages.

On September 7, 1901, he committed the most shocking of all murders. When Morant hears of three Boers approaching their camp, he goes out to meet them, with Handcock and two other troopers. It proves to be a Boer farmer Roelf van Staden and his two sons, 16-year-old Roelf jnr and the 12-year-old Chris who is very sick with the fever.

Morant quietly gives the orders, telling his men that when they get to yonder clearing, wait until he says “lay down your arms,” and when they relax, shoot them.

Arriving at the clearing, Morant barks “dismount”. The two troopers and Handcock then, following another pre-arranged signal, ready their rifles to fire. The Boers look at them, confused, and with growing horror, the sick young boy looks to his father for solace, for comfort, for assurance that they are not actually going to … ?

“Lay down your arms!” Morant commands, for all the world as if he wishes his troopers to genuinely put their rifles on the ground.

The father relaxes just a little only for the troopers and Handcock to suddenly swing their rifles up, take aim through the cold iron sights and … three shots are fired. Three Boers fall dead. They are left where they lie.

In the end, Morant and Handcock were brought undone by 14 Australian whistleblowers within the Carbineers together with one New Zealander, who – despite the fact that two men had already been murdered by Handcock when it was thought they were a danger of reporting to authorities – wrote and signed a letter, listing their atrocities, which was sent to the colonel in charge. 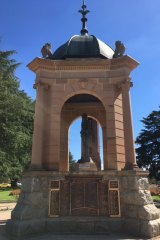 This led to the court-martial and their execution.

The defenders of the likes of Breaker Morant and Peter Handcock through the ages invariably come up with the same lines: “Things happen in war-time on the front-lines that it is like the damn hides for the rest of us to criticise.” As one who has written 10 books on Australia’s military actions, I acknowledge that, yes, there are things done in the heat of battle that look appalling from afar – but are part of midnight madness in the midst of life and death.

But Handcock’s atrocities were not of those kind. They were a series of calculated, cold-blooded murders, not committed in the heat of battle, more often than not on the orders of Morant, but that is no excuse.

Specifically on Handcock and Morant, defenders say they shot Boer prisoners on the direct orders of Kitchener himself. This is nonsense, and a transparent one. No evidence has ever emerged of such orders, and in the month that the worst atrocities occurred, the Bushveldt Carbineers took in 100 prisoners that survived.

The defenders also point to problems with the legal process of the court-martial. Yes, there were several – starting with the fact that their defence counsel didn’t get to them until the morning before the court-martial began. But those problems alter not a jot that it is beyond all doubt that both Morant and Handcock did exactly the atrocities they were accused of.

Do we dishonour Handcock by insisting his name be removed from the Bathurst Boer War Memorial?

We do not. We honour the law, by acknowledging that Handcock was found guilty by the accepted legal process of the time.

We honour those other brave soldiers on that monument, by not having their names on the same memorial as a war criminal.

We honour those that Handcock killed – the fellow soldier, the pastor, the unarmed prisoners, the children –_ by accepting that one who committed such atrocities has no place on a roll of honour.

And we honour the brave whistleblowers, those courageous soldiers who risked their lives by reporting the atrocities of Morant and Handcock. They are the unsung heroes of the piece.

Handcock is a convicted war criminal who murdered without mercy and his name does not belong on any honour roll.

I accept that in 1964 they knew very little about the fine detail of what Handcock did. But in 2021 we now know most of it, and it is shocking. Remove him.