EXCLUSIVE: Labour is accused of breaking election rules after activist is filmed handing out leaflets for Sadiq Khan to voters queuing up for the polls

A Labour supporter campaigning for Sadiq Khan to become Mayor of London appeared to break strict Electoral Commission rules – after handing out leaflets outside a polling station.

The activist was captured on film at Overland Children’s Centre in Bow, London where members of the public were queuing to cast their votes.

Leaflets clearly showing Mr Khan’s face were given to people at the end of the long line as they waited to get their ballot papers.

A spokeswoman for the Electoral Commission told MailOnline this afternoon: ‘Parties and candidates are allowed to campaign on polling day, but not within the perimeters of a polling station. 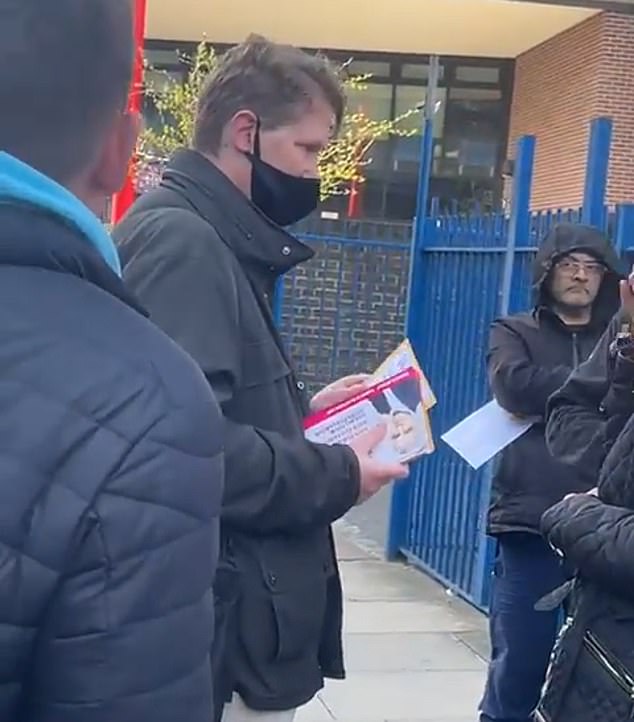 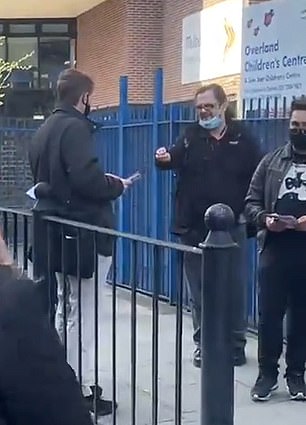 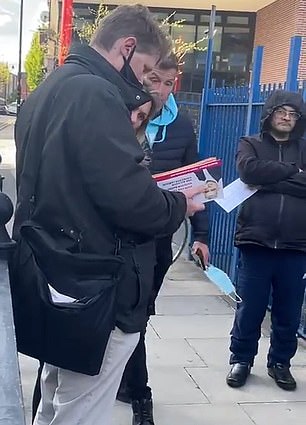 ‘Anyone who is concerned about activity outside a polling station should raise their concerns with the Returning Officer in the first instance.’

MailOnline supplied the video to the Labour Party for a comment but received no reply before publication deadline.

Another voter said the same thing had happened at the Tredegar Centre also in East London.

The eyewitness added: ‘My wife was approached outside another polling station in Bow by a Labour activist handing out leaflets – she never got as far as accepting them because we had postal votes we just dropped off, so had actually already voted. 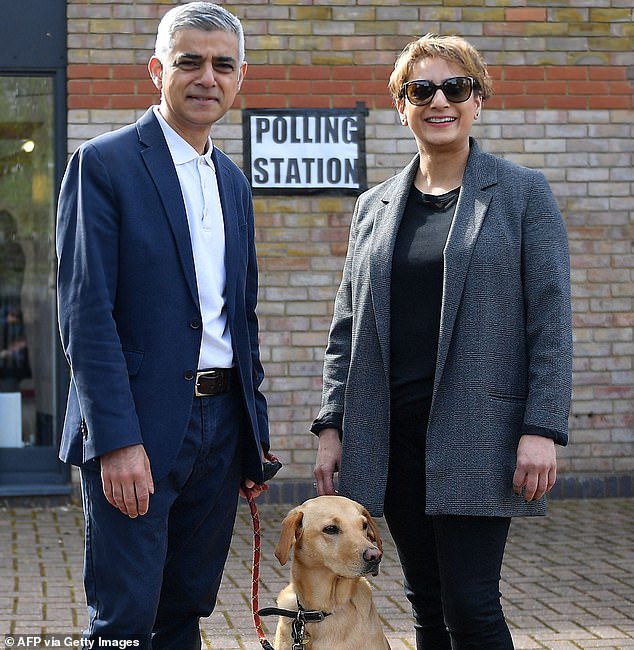 Sadiq Khan, along with wife Saadiya and their dog Luna, were spotted bright and early at their polling station at St Albans Church in south London, ready to put their crosses in the box

‘I was handing them in at the time. The lady was definitely Labour, and she definitely had leaflets in her hand.’

Mr Khan had been widely expected to retain the keys to City Hall, though his lead over Conservative rival Shaun Bailey has shrunk in recent days amid fears about the capital’s crime crisis.

Mr Khan, along with wife Saadiya and their dog Luna, were spotted bright and early at their polling station at St Albans Church in south London, on Thursday ready to put their crosses in the box.

The Labour candidate was thought set to win a second term – but worries following a spate of knife killings could deprive him of a first round victory in today’s election.

An Opinium survey this week showed 52 per cent of Londoners think tackling knife crime should be the next mayor’s top priority.

The London election has tightened, with a YouGov poll on Wednesday giving Mr Khan a 12-point lead, based on first preference votes, down from 21 points a month ago.

It suggested Mr Khan will win the contest in a second round run-off with Mr Bailey by 59 per cent to 41 per cent.

Knife crime in the capital has increased by more than 60 per cent between May 2016, when Mr Khan took office, and March last year, according to the Office for National Statistics.

Meanwhile, Boris Johnson voted early in the dramatic Super Thursday battle amid signs he was on course to take a wrecking ball to the Red Wall again.

It proved to be true today as the Tories took Labour stronghold Hartlepool for the first time in history.

The PM cast his ballot along with fiancee Carrie Symonds in London as the crucial set of elections got underway.

The Tories had been boosted by the latest poll showing they have a huge 10-percentage point lead – driven by the success of the vaccine rollout.

Sir Keir Starmer has yet to comment on the loss of Hartlepool, emerging grim faced this morning.